His music is constantly being performed abroad. In Finland, he is known as a composer of choral music and an active singer. Regular readers of FMQ will recognise him as one of our house translators. Jaakko Mäntyjärvi is something of a musical outlier.

Choral music has formed the core of the output of composer Jaakko Mäntyjärvi from the very first. Nearly all of his works are for choir, most of them commissioned by a wide range of parties, from the 700th anniversary of Turku Cathedral to the World Symposium on Choral Music and including celebrated ensembles such as the Kings Singers. But things might have turned out quite differently.

“When I had moved to Helsinki to study, I heard the Savolaisen Osakunnan Laulajat student choir and was inspired to join them. At that time, I had also joined the Helsinki University Symphony Orchestra as a percussionist, so orchestral music might just as well have become my thing.”

Mäntyjärvi studied English language and literature at the University of Helsinki and also music theory and, later, choir conducting at the Sibelius Academy. He never received formal training in composition. After university, translation became his principal occupation, and as a full-time freelance translator today, he considers himself very happy with the balance in his professional life. Composing being a sideline, so to speak, allows him to specialise as he pleases.

His first serious choral work was Four Shakespeare Songs (1984), written for the aforementioned student choir. Subsequently it made his international reputation as a skilful composer of choral music, and it remains his most frequently performed work. Being an active choral singer himself, he has a practical approach to composition.

“The choir is the instrument that I know from the inside, and I’ve never had any particular ambitions to expand my repertoire. There is a steady demand for choral music, after all.”

His practical approach does not mean that his music is easy, not by any means, but it does mean that his writing is vocally idiomatic.

“My harmonic language is mainly very sonorous, not tonal but largely consonance-driven. I do use effects and other contemporary means if required for the text or atmosphere at hand. I used to avoid simple solutions but am less self-conscious about that nowadays. A musical idea does not need to be complex to be effective.”

Nearly everything in Mäntyjärvi’s catalogue was written to commission. His most recent commissioned work, Das Abendmahl to a poem by Rainer Maria Rilke, was premiered in Copenhagen in early May by the Hymnia chamber choir. The choir had commissioned six new works internationally to honour the 500th anniversary of the death of Leonardo da Vinci.

To what extent does he customise his works for a specific group of performers?

“When I’m commissioned, I of course need to know what the group is like, and I’m also interested in the context in which the work is to be premiered. If the group is a top-notch ensemble, I have to be a bit careful not to play to their strengths so much that no one else would be able to perform the work later.”

Mäntyjärvi’s works are performed constantly around the world, particularly in the USA and Japan, and regularly in Europe as well. He cordially attributes this success to his publisher Reijo Kekkonen, the publishing director of Sulasol [the Finnish Amateur Musicians’ Association]. Kekkonen, an active choral singer himself, recognised the value of Mäntyjärvi’s music at a very early stage.

“I’m hopeless at promoting myself. Reijo basically knows everyone who is anyone in the choral world, and he has a knack for recommending the right piece to the right person at any given time.”

In choral music, Jaakko Mäntyjärvi is an international celebrity. In Finnish music circles, he could rather be described as an outlier. “If I say that choral music is a marginal genre, it sounds like I’m being bitter. But it’s no more than the truth, if one considers what the public at large sees as the mainstream genres in classical music. In Finland, choral music is still perceived as largely an amateur pursuit that is not expected to have any particularly great artistic ambitions. A composer focusing on choral music will have a very different public profile (if any) than a composer of orchestral music or opera.”

Mäntyjärvi almost always starts with a text when writing his vocal music. His selection of texts betrays a wide-ranging interest in languages and cultures, with settings of texts from Finnish and Swedish to Basque and Japanese.

“My text selections are partly driven by the fact that I don’t like to repeat myself. For instance, I’ve not written any sacred pieces in Latin for a while now, because I’ve already done quite a few of them.”

Mäntyjärvi’s output includes a number of works inspired by folk music. He began his studies in the early 1980s, which was when the Department of Folk Music was established at the Sibelius Academy and the trend subsequently labelled “new folk music” began.

“The revitalisation of folk music around that time was a big thing – it was a refreshing notion that it was actually possible to create new music in that context instead of just performing existing pieces as if they were museum exhibits.”

He also draws parallels between folk music and minimalism, a style for which he has a great appreciation: the notion of “slow change” is essential to both. Something of this may be seen in the aforementioned commission premiered in Copenhagen. The poem by Rilke was inspired by Leonardo’s fresco of the Last Supper; the musical idea in Mäntyjärvi’s setting is stretching out a single moment to extremes.

“I took as the structural outline the briefest of choruses in Bach’s St Matthew Passion: ‘Herr, bin ich’s?’ This depicts the same moment in the narrative as Leonardo’s fresco: Jesus has just said that one of his disciples will betray him. I slowed down this 10-second chorus to make it last five minutes, and over this foundation I laid chromatic melodic lines setting the Rilke poem.”

Apart from composing, Jaakko Mäntyjärvi has been active in a number of other musical contexts, including being artistic director of the Tampere Vocal Music Festival in 2013. He continues to sing in several choirs, and in 2015 he established his own group, Chamber Choir cc FREIA, which has recently been exporting Finnish music that he feels should be better known abroad.

“Bengt Johansson, for instance, is very little known outside Finland, even though his Neo-Classical, bitonal style is very accessible to today’s choral audiences. There isn’t even a language barrier as with Toivo Kuula – another Finnish composer who should be better known abroad – because much of Johansson’s choral output is in English or Latin.”

Looking ahead, Jaakko Mäntyjärvi notes that what choral music needs is a change in its public image, but this is a difficult process, as attitudes are hard to shift.

“We have this pastime that has thousands of participants around the country, from kids to old age pensioners. You can begin it with practically no pre-existing skills. You can study it, but there are no formal qualifications to be had. You can progress to become a professional in it, but the vast majority prefer to have it as a leisure pursuit. It can have a powerful emotional impact on both participants and spectators. It provides a sense of achievement and fosters a sense of community, and it also has scientifically proven health benefits... Now, just consider how sharply different attitudes can be, for instance to the question of whether such an activity should be supported by taxpayer euros, depending on whether the above is represented as describing choral music – or football!” 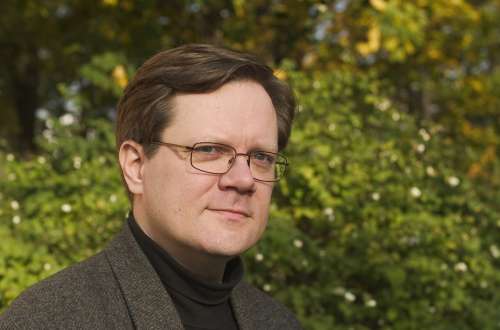 Jaakko Mäntyjärvi talks about his choral works at the Tampere Vocal festival on Saturday, June 8, 2019.