Choral singing has made a vital contribution to Finland’s history and is a crucial building block of Finnish society. Pasi Hyökki is well versed in the challenges and rewards of conducting a male choir institution and a children’s choir institution, each with a strong tradition and reputation. Professional choral singing, however, is pitifully underdeveloped in Finland.

In spring 2018, three venerable Finnish choral institutions celebrated significant anniversaries: the Academic Male Voice Choir of Helsinki (Akademiska Sångföreningen) at 180, Muntra Musikanter at 140 and the YL Male Choir at 135. Looking at the history of these three choirs is to look at the twists and turns of Finnish history. All three were established in academia, and all three are male choirs – after all, women were not admitted to university until the early 20th century. All three have always been active in commissioning and performing new music.

According to Pasi Hyökki, artistic director of the YL Male Choir, Finland has a firm foundation for male choir singing that may well be unique worldwide. Formerly known as the Helsinki University Chorus (Ylioppilaskunnan Laulajat), YL was originally established as a vehicle for promoting the Finnish language and culture.

“YL was actively involved in shaping the Finnish national identity, first through language policy and later by fostering national feeling. If it had not been for male choirs interpreting the shared sentiments of the Finnish people at these very serious turning points of history, the national awakening might not have penetrated our collective consciousness quite so deeply.”

Hyökki goes on to explain that after the Second World War this ideological function of choral music was no longer considered necessary. Male choirs responded by evolving the instrument and taking it to the very extreme of art music, for instance by performing avant-garde works by composers such as Erik Bergman, himself a choir conductor and well acquainted with the instrument. Today, however, it is impossible to ignore the huge social significance of choral music.

“Our next project is on a theme named Lands of our fathers, which highlights experiences of recent immigrants and also the stories of those who emigrated from Finland after the Second World War. We explore how these people have integrated into their new homeland and its culture and how this has affected them.”

The choir is, of course, commissioning new music for this purpose.

“We don’t commission pieces just for the sake of commissioning. There is always a context for new works. Art can prompt a huge emotional response and can be thought-provoking and highlight things not usually perceived.” 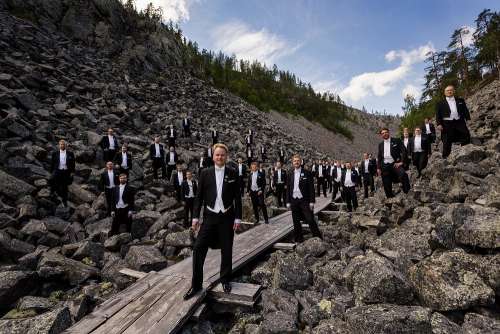 In his other job as the conductor of the world-famous Tapiola Choir, Pasi Hyökki is in a position to shape the future of Finnish choral singing. The choir was founded by Erkki Pohjola in 1963.

“The purpose of the choir is to have children make real art. Though they are young, they are real musicians and as such command respect – it is simply astonishing what children and adolescents are capable of!”

Hyökki notes that an adult choir has much firmer preconceptions about which things are difficult and which are not.

“For children and adolescents, all music is new music. They trust the skill of the instructor to make sense of the music, to take it apart and to breathe life into it.”

In the best cases, the kids are so taken with the music that they may spontaneously sing a piece by, say, Einojuhani Rautavaara in the car on the way to the summer cottage, much to the amazement of the parents.

“This is a job where one can influence how children’s tastes develop. If you only ever eat chips with ketchup, you miss out on a lot of delicious foods. The same principle applies to music!”

Hyökki wishes above all that children in Finland would sing more.

“It is a major cause for concern that children do not use their voices as much as they used to. We have put in extra rehearsals to improve the singers’ vocal quality, and we have also established choral clubs at schools. Yet according to many studies, singing is one of the most highly desired pastimes among children!”

Apart from his work with the YL Male Choir and the Tapiola Choir, Pasi Hyökki leads the Talla Vocal Ensemble and remains closely involved with the EMO Ensemble mixed choir, which he established in 2000. Originally consisting of students at the Espoo Music Institute, the choir now works with guest conductors on a variety of projects.

“Professional musicians are used to working with different conductors all the time. In choral music, that is not so common; often people even join a particular choir because of its conductor.”

“What is particularly worrying is that many voice teachers tell their soloist students to stop singing in a choir! That is hugely frustrating for a choral conductor. Why could there not be strong, soloist voices in a choir?”

Calling for a professional choir

Pasi Hyökki notes that there is a lot to improve in attitudes towards choral music among professional musicians.

“What is particularly worrying is that many voice teachers tell their soloist students to stop singing in a choir! That is hugely frustrating for a choral conductor. Why could there not be strong, soloist voices in a choir?”

Finns are avid choral singers, and there is a huge number of choirs in the country, but at the moment the Chorus of the Finnish National Opera is the only ensemble where one can actually make a living as a professional choral singer. The Helsinki Chamber Choir, for instance, is made up of professional musicians, but the choir can only employ them on a part-time basis.

“There are things that one simply cannot do with amateurs alone. My number one dream is for society to understand that there is a massive limb missing from an otherwise thriving tree of culture. Is there really no need for a full-time professional choir? The orchestras at the Music Centre in Helsinki may well say that a choir of amateurs is good enough for them; well, would they say that an orchestra of music institute students is good enough for them too? 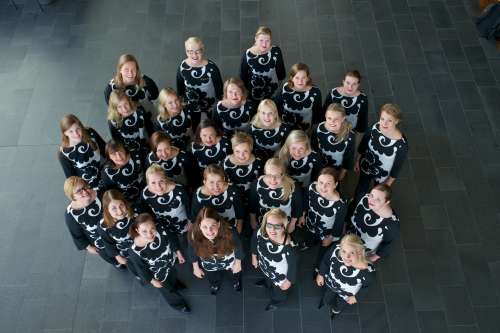 The Female Choir KYN is one of the choirs at the VocalEspoo festival 2018. Photo: Mikko Reinikainen

Pasi Hyökki is also in charge of a choral festival. This is his third time heading VocalEspoo, a festival of vocal and choral music held every two years in early June. The festival has three pillars: courses, competitions and concerts. The competitions include both ‘choral battles’ and an international choral composition competition, which this year received no fewer than 161 entries. Hyökki does acknowledge that having competitions in music does not really make sense.

“On the other hand, choirs participate in international competitions quite often. Usually it is more about self-improvement and attaining one’s own goals than about ranking. This is motivating for the choir members. I would prefer to have more competitions rather than no competitions at all, because having a plurality of competitions would lessen the importance attached to any one competition.

“My aim is for VocalEspoo to establish itself firmly on the operating horizon of Finnish choirs, because a choral festival is only as strong as the choirs attending. The Tampere Vocal Music Festival is an excellent example of this, as it brings together as many as 50 to 60 choirs in the International Chorus Review every two years.”

Pasi Hyökki seems happy with where he is professionally: he is realising his artistic ambitions with fine choirs and carrying Finnish choral culture forward for his part.

“I am convinced that without choirs we would not have the society we have today in Finland. Everyone who has ever sung in a choir has a completely different appreciation for culture.”

- In the course of one week, the festival features a wide range of courses, competitions and concerts in many vocal genres.

In September 2017 the YL Male Choir, the Tapiola Choir and the Academic Female Choir Lyran performed at the Music Centre in Helsinki Michael Ostrzyga’s “Nine Echos of Ancient Trees”, Juuso Vanonen’s “Tässä on valo”, and Einojuhani Rautavaara’s “Halavan himmeän alla”. The same choirs will join together for a concert at the VocalEspoo festival on 9 June 2018. In this video highlights of the 2017 concert: