The very first sounds in the concert run a chill up the spine: the beautiful musical language of accordionist Johanna Juhola combined with a vibrant, lucid soundscape captivate the listener. As the title of the concert promises, they create space.

Accordionist and composer Johanna Juhola is working on an artistically oriented doctorate in folk music at the Sibelius Academy of the University of the Arts Helsinki. Her doctorate focuses on the impact of stories, images and meanings on the process of composing and rehearsing and on the resulting performance. The topic suits Juhola well, as she has always considered music to be descriptive. She has created a musical world of her own, extending to the titles of her pieces and the stories underlying them.

Juhola’s first post-graduate recital was titled Spaces, stories, scenes, and she had invited a new combo to appear with her. The sonic elements provided by electronics wizard Teemu Korpipää complemented the moods of Juhola’s music excellently, and the electric organ and MIDI harmonica expertly wielded by Jouko Kyhälä slotted effortlessly into the soundscape. Juhola explained the stories behind her pieces in the programme booklet and in her introductions on stage.

The music in the concert had a playfulness about it. Pachinko-sensei, for instance, is a brilliant and melodically catchy take on the chaos of sounds in Tokyo. The refrain is wonderfully simple and childlike. Elektroniikkakerho [Electronics club] was also delightful. Juhola explained that she had seen a video on Twitter where someone was playing an electronic device they had made themselves. Its random beeps inspired Juhola to jam along with it, since, as she put it, only one thing was missing: an accordion! 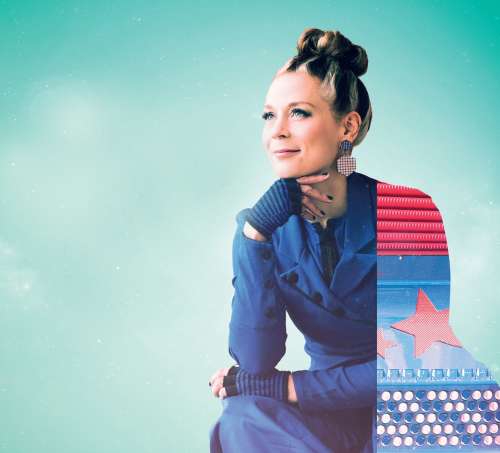 The stories of the pieces included philosophical thoughts, as in Pieni yölaulu [Little night song], where the theme is accepting that everything remains uncompleted. Another example of profound contemplation underlying the music is Tuhottu teos [Destroyed work]. Juhola was inspired by a work of visual art that a friend of hers created laboriously and with much painted detail – only to melt it down into an unrecognisable lump for an exhibition. Juhola executed the same idea in music: she played an extensive development of a melody that then morphed from a handful of phrases to an unrecognisable miasma under the hands of Teemu Korpipää. The sound of the accordion became blended with machine sounds, and finally only a single, oppressive buzzing sound was left.

Tango kolmessa erässä [Tango in three rounds] is based on Juhola’s insight that tango dancers and wrestlers grapple with each other in similar ways. In an amusing touch, the piece includes a sportscast by Kyhälä, run through an effect generator. Tehokas touhotus [Efficient bustle] has a great disco beat and bass riff, and the band was visibly excited about its mood. Kyhälä’s electric organ is particularly well suited to this kind of landscape, and the effects spicing up his chord playing definitely evoke the discos of yesteryear. The band executed with precision the rhythmic fun that filled the piece –complete with a rip-roaring accordion solo.

Juhola had previously used electronic accompaniments in her music, and in this concert they were featured in numerous pieces. Combining the accordion with electronic accompaniment has, to my mind, become one of her hallmarks. Although Juhola’s previous bands did include electronic elements, only now did they assume a major musical role. A good example is Lähiökesälähiö [Suburban summer suburb], where the soundscape includes speech and laughter, a charming addition to the atmosphere. The band also sang and whistled as required.

For all the excellence in the performance, the real star of the show was Juhola’s music and the strong melodic vein in her compositions, which supports the arrangements built around it. The rhythmic motifs often reflect the harmonies, which may be surprising but are never unnatural. Minor and major alternate, creating tension and release.

The tango remains a major influence, but Juhola’s roots in Finnish folk music were clearly evident. A particularly lovely melody maybe found in Viimeiset jamit [Last jam session], which is about a care home for old musicians – a charming concept. Kyhälä’s harmonica responded with an old, nostalgic sound to the accordion, in constantly shrinking melodic fragments.

I eagerly await what Juhola will come up for her next post-graduate recital on storytelling in music. And I also hope that this music will one day be available on disc. The concert was excellent as a whole and offered many magnificent moments. The pieces told beautiful, meaningful stories that the listener could identify with.

Sanni Virta is the editor-in-chief of Kantele magazine. She plays the concert kantele and studies folk music at the Sibelius Academy. She also writes music and has released a solo album in 2017.

[Johanna Juhola & Imaginary Friends. In this visualised show, Johanna Juhola is the only live performer, with her team of accompanists and fellow performers projected alongside her on video screens.]