Sometimes it is enjoyable to listen to music that is actually scary – especially when it is not coming predictably from a death metal band but instead from a combination of violin, human voice, wind instruments and percussion. Violinist Meriheini Luoto is a composer and director of a project titled Metsänpeitto (literally “forest cover”) where a folklore phenomenon has been re-created through music and performed by an ensemble ranging from four to eight players.

Captured by spells and stories

“Forest cover as a folklore phenomenon refers to incidents where a familiar forest suddenly transforms into something entirely strange and unrecognisable”, Luoto explains the Finnish traditional narrative. “It becomes difficult to find a way back from the forest or for others to find the person who is lost, even when that person can see the search party. Most people have eventually found their way out, but not everyone. According to many different reports, however, the forest cover experience has not been entirely negative: forest has also provided care and nourishment.”

The first Metsänpeitto album was released in 2017 and nominated for the Teosto Prize, Finland’s most significant annual music award. The work creates a sensation of the listener wandering into forest cover and remaining there. In the sequel, which was released recently, music can be heard coming from forest cover and the tense and sinister mood finally resolves into a dazzlingly bright light.

Luoto researched the topic through reading, listening to folk tales and trying to understand the concept as well as possible.

“My starting point was the forest as the scene of events, and I played with individual sounds and short themes derived from forest soundscapes. I have tried to imagine what it would feel like to experience forest cover, and then started playing music based on those feelings – after all, we human beings and our basic needs are still relatively unchanged even though centuries have passed. I have also reflected on the experience of being lost and feeling like an outsider, isolated from the rest of the world, and this sensation resonates as a separate background layer in my music.”

Metsänpeitto was initially Luoto’s master’s degree concert for the Sibelius Academy Folk Music Department. The concert material was later recorded by Kaj Mäki-Ullakko using a binaural recording method (a “two-ear” recording technique with the intent of creating a 3D sound sensation for the listener) and the album was released in 2017. The same summer, Luoto was featured in the Sibelius Academy’s Young Artists of the Summer concert series. Not wanting to repeat her master’s concert in the summer series, she created a sequel which has now also been released as a recording under the title Metsänpeitto 2, with Taavi Oramo as Artistic Producer.

“I make music that inspires me. My musical past is always present in it, even when I’m not always aware of its presence. I am especially intrigued by the mindset of a pelimanni (folk player) from centuries ago, someone who perhaps has experienced isolation. Where does music spring from when one cannot hear others playing? This state may remain unattainable for us today, but maybe the idea can serve as a starting point”, Luoto reflects.

“The inspiring aspect about tradition is its general modus operandi. Without any strong aesthetic norms limiting them, folk musicians are free to discover their own ways of doing things, a process that has always been a central and accepted part of the culture. Folk musicians are a part of a generational continuum which provides them with a deep sense of humanity and a clear perspective into the ways of working and existing. Another essential aspect is the significance and strength of community.”

Luoto, who began playing classical violin at age four, discovered all of this early when she participated in her first Näppäri folk music course for children and for the first time encountered a group of a hundred players her own age.

“That’s where my violinist’s identity was born. I continued playing violin throughout my school years, despite my occasional lack of interest which led me to dabble with many other instruments such as steel pans. My high school music teacher Ari Viitanen taught me to be open-minded: any kinds of sounds can be used to create music, and everything is allowed in music!”

In contemporary classical music, Luoto is most interested in sound-driven works, composers from diverse backgrounds whether through their gender, cultural or musical background, the widening role of musicians and composers, and the increasingly wholistic way of programming concerts. As an example, she mentions Walter Sallinen’s work UXO, which was performed at the Helsinki Festival last summer. “It was a fine and impressive work, a whole new way of experiencing music.”

After finishing lower secondary school, Luoto continued to the music-oriented Sibelius Upper Secondary School where she and her classmates wasted no time forming new ensembles, such as the contemporary folk music group Hohka which was an active part of Luoto’s life for the following 11 years. “Ensemble playing and collective creativeness has always been ‘it’ for me, both in classical and folk music.” Around the same time, she was accepted to study folk music at the Junior Academy, Sibelius Academy’s pre-tertiary program, where she spent two years before enrolling in bachelor and master studies.

Experimental music gradually became a part of her identity as a musician. She started to combine singing with playing, as well as participating in selected classes at the Department of Music Technology. “Towards the end of my studies, I discovered free improvisation and my world expanded with one big bang. It gave me the courage to start playing within a completely free framework and it just felt like the right thing for me, and at the same time strangely familiar.”

“I still wish to keep developing my improvisation but I’m also interested in performance art, some of the more unusual ways of expression, and the use of technology. My upcoming performance in November at the [experimental music and film event] SOLA Festival in Helsinki will be a demonstration of my fairly playful and experimental new work which was created using a movement sensor, as well as utilising a Max/MSP programming language. I will also continue my collaboration with dance artist Valtteri Raekallio through our joint performance titled Muistikuvia – Recollections, as well as through a wider range of dance projects”, Luoto outlines her plans. 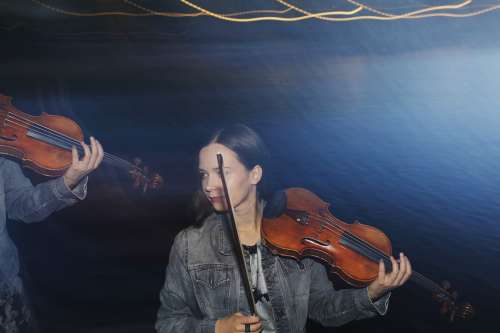 Currently, the Metsänpeitto project continues through performances in various line-ups. In addition, Luoto is working together with violist Iida Savolainen on the second album from their duo Akkajee.

“It is so inspiring to create things together! In the last few years, I have been toiling away by myself a lot, even though my projects have culminated in ensemble playing. The Metsänpeitto material has been born through improvisations and I have been making decisions later, after listening to the recordings. I also leave a lot of my decision making until the moment of playing”, she reveals. “I pre-plan the big picture for each work and establish the improvisation methods I want to use, so that all players know what to expect, but the group is given a lot of freedom in the performance situation, for example deciding how long they want each section to last. They are also free to treat any material through their own variations.”

In April, an orchestrated version of Metsänpeitto will be performed together with the Tapiola Sinfonietta.

Nature is bigger than us

“Metsänpeitto makes it clear that humans are only a small part of nature, and that nature has more power that we can ever imagine. In folk tradition, this power of nature has perhaps been recognised better: nature was always feared and respected, and it was not important to try to own nature. This philosophy was also an important part of everyday life,” Luoto says.

“Even though my music does not have a direct message, I feel that art is important right now. It can offer meaning to our lives and help us stop for a moment and reflect. I try to avoid any form of force-feeding as I feel that people need to be able to discover for themselves how to change their ways of doing things. To allow this to happen, we need space and time for reflection – and who knows, maybe a small introduction into the forest landscape can play a part in enabling this!”