Signe and Emmi U Quintet bring a dreamy night of jazz and beyond to Tampere’s stellar new music venue.

Some nights it all comes together: performance, visual design, ambiance and surroundings. On one of this mild winter's coldest nights, the stars aligned at G Livelab Tampere.

The red-brick nineteenth-century building and its smokestack seemed to glow on a snowy riverbank behind the city theatre. It once housed a paper mill’s boiler, later serving as a library before re-opening as the second G Livelab in August 2019, three years after the club’s high-tech Helsinki cousin.

This one has more space (250 seats compared to 180) and a much higher ceiling, yet feels slightly less dazzling than the state-of-the-art Helsinki venue. The Tampere club, too, was designed by the Casagrande architectural office, with acoustics and lighting by Akukon and speakers by Genelec. Here too, the music ranges from hip-hop to classical, folk, rock and pop from Finland and around the world.

Back-to-back gigs at these classy companion venues, just two hours apart, may make Finland a more attractive destination for foreign touring musicians, as evidenced by recent double appearances by American jazz musicians Jason Moran, Jaimie Branch and Jeff Parker. Both clubs are owned by the Finnish Musicians’ Union and are designed "sound first" – to be optimal for performing and listening above all else. 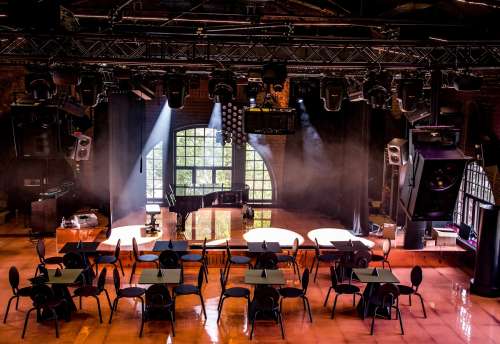 You could have heard a pin drop as vocal quartet Signe took the stage in bright colours. The lighting, dance moves and stage patter were all on point, but the group’s distinctive sound made the night.

That sound was fresher and more vivid live than on their recordings, a 2017 EP and their 2019 debut album To Sappho, which was just shortlisted for the Jazz Emma award as well as the Teosto Prize 2020.

Five years since they started, the group has become much more poised, relaxed and radiant onstage. They have performed around Finland and Europe, but tours have been limited by other commitments. For instance Selma Savolainen just released an album as Selma Juudit Alessandra, while double bassist Kaisa Mäensivu has a busy career in New York.

Mäensivu is Signe’s only instrumentalist – and her precisely-targeted playing is the secret weapon that sets them apart from other vocal groups.

Also making them unique is a repertoire that ranges from ancient Greek poems to Swedish-Finnish sea-shanties. Though jazz is only part of their sound, it too makes them singular.

Finland has some fine solo female jazz singers, but not much of a jazz vocal tradition otherwise. The jazziest moments of the set were Mäensivu’s melodic solos and the imaginative scat singing of Riikka Keränen, which at times approached gospel and Sámi yoik.

Switching effortlessly between Finnish, Swedish and English, the quartet performed songs from both records, as well as a new single, Liian varhain, which appears on the Finnish vocal music compilation Voice of Generations. The tune was composed by Josefiina Vannesluoma, who has the most songwriting credits in the group.

Still, there is no clear leader of the group, with the three main singers taking turns in the spotlight and then stepping back to form a rhythm section behind Mäensivu’s solos.

At times, this was experimental choral music, an exploration of the possibilities of four voices, four strings and some finger-snapping. Ode to Aphrodite’s whispered intro sounded like an electronic loop, while the breathy repetition at the start of Sardeesta suggested Laurie Anderson’s O Superman. Cretan Girls, with its cartoony falsetto vocals, was like stepping into a surreal Frank Zappa operetta, sounding less shrill than on record. There were ambient drone soundscapes on Puhun totta and Ruben, a harrowing spoken-word tale of archipelago bootleggers worthy of Ernest Hemingway.

Emmi U Quintet - expressive and lyrical

Like Signe, pianist Emmi Uimonen’s background spans folk, classical and jazz. Her Emmi U Quintet released its debut in late 2019. In Tampere she was expressive and lyrical, bringing strong percussive effects to My Bird, the album’s title track.

Violinist Silva Kallionpää, who is also a member of piano trio Hands and Omens, had a fine dialogue with mellow-toned alto saxophonist Jesse Vilhomaa on Sumu hälvenee.

Backing it all up with loose, funky junkyard drumming – sometimes played with his bare hands – was Erik Fräki. He’s a veteran of Latin band Nossa Bossa with Signe’s Vannesluoma, as well as Virta and Katu Kaiku.

Fräki helps to hold this group of relative youngsters together, supported by the meaty stand-up bass of Tuomas Talvi, who played on the debut album of Milo & Moses. This quintet has gobs of potential, once its members get more experience under their belts.