This double album is the issue of three concerts given in Minnesota in February 2016, and Olli Kortekangas’ Migrations was a commission for that occasion. Migrations must have caused many in its initial audiences to reflect upon their own origins, and it retains its ability to touch the heart in this recording.

This double album is the issue of three concerts given in Minnesota in February 2016; hence the slightly lop-sided duration of the CDs, which (I imagine) present the items the other way around from then.

Olli Kortekangas’ Migrations was a commission for that occasion; as he explains in his booklet essay, he was given the brief that his work had to be programmable with Kullervo. In the event he did without the baritone solo, availing himself of mezzo, male-voice chorus and orchestra to produce this deeply impressive cantata.

There’s a strong Finnish presence in the Minnesota area, and for his texts Kortekangas turned to the poetry of Sheila Packa, a Minnesotan with family roots in western Finland. Migrations, 25 minutes long, is cast in four movements for voice(s) and orchestra (mostly: in one the chorus sings a cappella) linked by three orchestral interludes for orchestra, with concertante roles for clarinet, horn and cello – instruments with a singing nature, as Kortekangas points out.

That’s in line with the predominantly lyrical character of the work as a whole. Packa’s poetry deals with the dislocation that migration brings, but Kortekangas’ music also hints at the epochal shift that comes with a permanent change of country: there’s a sense of scale behind the autumnal colours, and an anguish which occasionally breaks through the elegiac surface, rising to a thrilling climax in the closing bars.

Migrations must have caused many in its initial audiences to reflect upon their own origins, and it retains its ability to touch the heart in this recording – with Vänskä’s and YL’s invigorating Finlandia acting as antidote to any lingering melancholy.

In view of the sheer anger and fierceness that Osmo Vänskä revealed in his first cycle of Sibelius symphonies (also on BIS), I was expecting his reading of Kullervo to find even more power in this early masterpiece. Instead, to my surprise, the reserves into which he taps contain unsuspected lyricism. Conceding a little of the monumentality of the work, he finds instead a human warmth, and human pain.

There’s an unexpected tenderness in the second movement. Kullervo’s Youth, for example, which hints at the tragic events to follow. Vänskä’s underlining of exposed instrumental solos within this vast canvas suggests acute individual vulnerability trapped in the onward sweep of destiny; and the encounter between Kullervo and his sister involves real people, not cyphers.

Even so, it’s a reading of sweeping strength which is at the same time full of fascinating detail, given physical immediacy in BIS’ terrific recording. 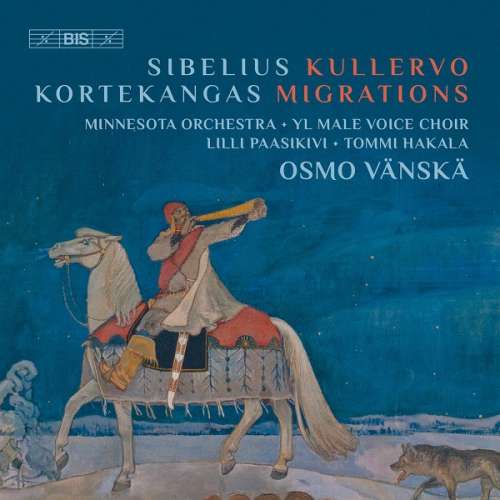