“My composition is about consumption from the social perspective but also from the material perspective: how material is created, how it is produced in factories,” says Ville Raasakka, describing his work Hypermarket and hypercommodity, a reflection on excess consumption, sweatshops and disposable culture.

Literary sources are also important: the classic Anti-Oedipus by Gilles Deleuze and Félix Guattari, Stuff Matters by Mark Miodownik and Simulacra and Simulation by Jean Baudrillard each had an impact on the aesthetics and approach of Raasakka’s piece. The title of the piece is borrowed from an article in Baudrillard’s book.

Hypermarket and hypercommodity is not a description of production or purchasing or markets but more like a conception of an imaginary situation on the market. The work was written to a commission from pianist Emil Holmström a few years ago, in close collaboration between composer and performer like all of Raasakka’s works. “I like to spend as much time working with musicians as they can spare,” says Raasakka.

Emil Holmström specialises in contemporary music, and he has performed several of Raasakka’s works over the years. He finds Hypermarket and hypercommodity particularly fascinating: “It’s a carefully constructed abstract thing with a really broad and multi-layered spectrum of colour. What is interesting is how these sounds move in space and time,” says Holmström.

Items associated with the cycle of consumption are used as sound sources and visual symbols on stage: money, consumer goods and packaging material. “This is not about preaching to the audience about excess consumption. It is more about highlighting how stupid the mechanism of consumerism really is,” says Holmström. It is up to the audience to decide how to respond as consumers.

Holmström premiered Hypermarket and hypercommodity with the Lapland Chamber Orchestra under Dalia Stasevska in Kemijärvi in 2015. Raasakka has nothing but praise for the performers: “Their technical proficiency is dazzling, and they were really excited about the piece!” The audience also gave feedback, as Raasakka is from Lapland and knows local people.

“There were all kinds of comments. Some thought that this was the greatest thing since sliced bread, while others said they didn’t understand it at all,” he says. “But it’s great that people say what they think! It’s really rare to get direct feedback.” 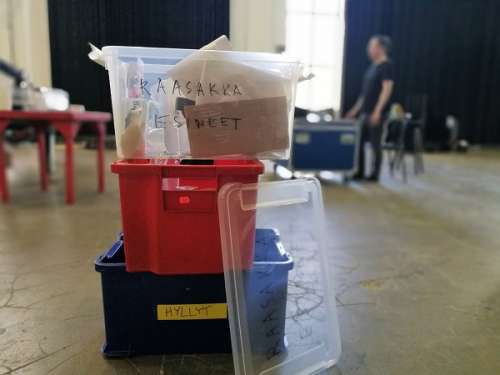 From the rehearsal.
Photo: Hanna Isolammi

Raasakka describes his musical idiom as hyper-realism. Borrowed from the visual arts of the 1970s, the term means “emphasising and even exaggerating details to create a sense of otherness in an everyday item or thing,” according to Raasakka.

The material used by Raasakka are everyday situations that he has recorded himself at factories, construction sites and elsewhere, and also Foley sounds. “I listen to the recordings intently many times and select an interesting or strange detail to work with,” he says. “I want to bring forth the material nature of sound in a new or interesting way.” This approach links him to the tradition of musique concrète.

Raasakka extends the notion of hyper-realism to apply to the classical concert institution. A concert may begin to look strange or funny if you start to look closely at established practices that everyone takes for granted. “In my works, the concept of the piece does not really exist until people hear it – each in their own way,” says Raasakka. “The concert situation itself can be regarded as material that can be shaped.”

Raasakka feels that the thing we call a “concert” has great potential for new kinds of programming and concept development. “Often contemporary works are considered challenging in the context of classical music, but on the other hand they may be more relevant for people today in terms of their subject matter than classical works,” he notes. “Generally, we might hope that the big names in classical music could become even more receptive to what a ‘concert’ could be, in terms of sound and concept.”

Ville Raasakka considers that creators of art should assume not only artistic responsibility but social responsibility too, prompting audiences to reflect on matters that they consider important. However, he is averse to propaganda or preaching: “Everyone does things in their own way and as their personality dictates. My aim is to make people think and talk,” he sums up. 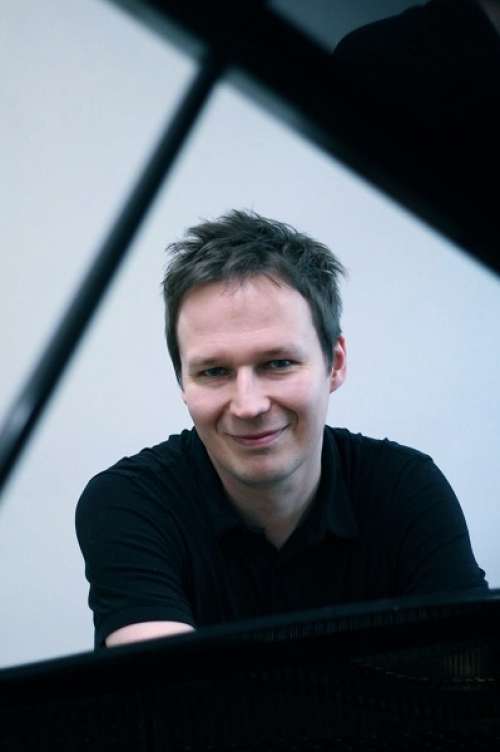 Hypermarket and hypercommodity for shopping items, piano and chamber orchestra by Ville Raasakka will be performed at the opening concert of the Suvisoitto festival on 29 June 2017.