The wars fought in the early decades of Finland’s independence cast a long, dark shadow far into the second half of the 20th century. The voice of war in works by Finnish composers speaks of victory, defeat, grief and reconciliation.

For centuries, Finland was a battleground between Eastern and Western powers. The longest period of peace that Finland has ever known to date – more than a century – began in 1809 when this eastern province of Sweden was annexed by Russia in the tumult of the Napoleonic Wars and created an autonomous Grand Duchy. That period of peace ended with the October Revolution and Finland’s independence in 1917.

Finland’s declaration of independence, published just over 100 years ago, made no reference to battles or sacrifices therein. There was an obvious reason for this: instead of violence, Finland’s struggle for independence was rooted in the rule of law and manifested itself in cultural acts of subversion such as the music of Jean Sibelius. Thus, Finland justified her independence with “the right [of the Finnish people] to determine its own fate, which is based on its centuries-old cultural development”.

The spectre of the Civil War

Only two months after independence was declared, a Civil War erupted in Finland. This was by far our bloodiest conflict of the 20th century, and it left deep scars on the national psyche. The Civil War was by its nature a class war, where the Reds (working class) fought the Whites (the establishment) and the majority of the intelligentsia, including composers, sided with the Whites. Hostilities lasted for no more than just over three months before the Whites claimed victory, but the casualties continued to multiply in the punitive actions that followed.

Finnish music also suffered a major loss in the Civil War, as composer Toivo Kuula was shot in an altercation at the victory celebrations of the Jaegers, elite soldiers on the White side, in Viipuri in May 1918. Kuula is remembered for his Impressionistically tinted solo songs and choral works, but as an instrumental composer he was only just getting started. His death cast a pall on the music profession as it emerged from the shadow of war. 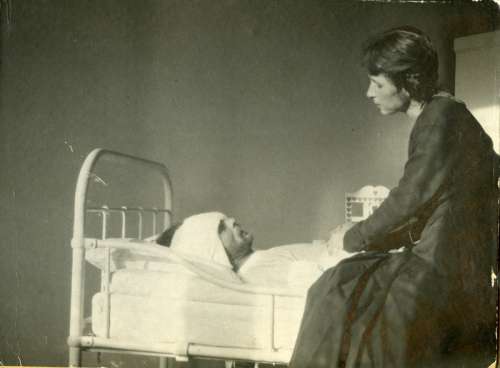 Composer Toivo Kuula died in a hospital after he was shot in May 1918. His wife Alma Kuula was a renown singer who specialised in performing contemporary repertoire of her time.

The end of the Civil War was never celebrated with monumental victory hymns, even though a substantial body of nationalistically tinted occasional music was written. Most composers had been onlookers in the war, and many of them were in actual danger, such as Sibelius in the southern part of the country that was held by the Reds. Sibelius was evacuated from his home at Ainola to Lapinlahti in Helsinki.

Composer Aarre Merikanto, 26 years old at the time, was in the war as a member of the Civil Guard; he was taken prisoner in defending Suitia Manor in February 1918. Immediately after the Civil War he wrote his Second Symphony, which was not well received even on the winning side. Critic "Bis" Wasenius slammed the new work: “The grotesque and brutal treatment of a childishly conceived war-like theme was destroyed by horrible harmonies and an obviously chaotic orchestration.”

By contrast, the Second Symphony of Leevi Madetoja was received in December 1918 as a masterpiece with which the composer fulfilled the great expectations vested in him. Nothing about the title of or commentary on the symphony alluded to the very recent national tragedy, but stylistically the work represented the kind of "ethical" art seeking reconciliation and balance that Madetoja greatly admired. “The emotional charge of the symphony, rising from a dark and tragic fundament, excellently captures the spirit of the times,” opined Evert Katila in Helsingin Sanomat.

Sibelius had been the most prominent composer in the drive for independence, writing Finlandia and other compositions that amounted to passive resistance. One of his most defiant works, however, is Jääkärien marssi (March of the Jaegers), written in autumn 1917 as a homage to the Finnish soldiers being secretly trained in Germany. As Finland was still part of Russia and Russia was at war with Germany, this was technically an act of treason and therefore punishable by death. One could have imagined that Sibelius would have celebrated independence with a magnificent grand work, but between 1915 and 1919 he could spare thought for little else than his Fifth Symphony. After the Civil War, he did write three cantatas in short succession – Oma maa (Our native land, 1918), Jordens sång (Song of the Earth, 1919) and Maan virsi (Hymn to the Earth, 1920). These were created in a spirit of moderation and reconstruction, a far cry from the passion and enthusiasm of his earlier nationalist works. (See also Veijo Murtomäki's article here.) 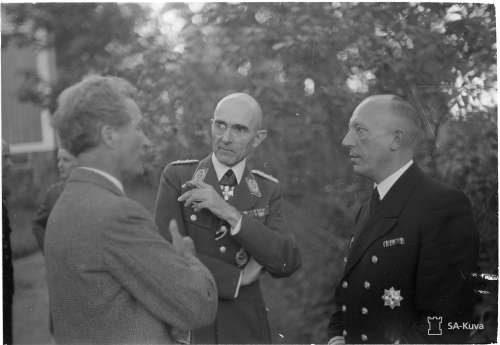 Tones of victory and defeat

Less than 20 years later, in 1939, the Winter War began as Stalin’s Soviet Union invaded Finland. The war was short, brutal and ruinous, but unlike the Civil War it brought the nation together. The spirit of these times was captured most aptly in Taneli Kuusisto’s Suomalainen rukous (Finnish prayer), premiered just before war broke out. It is a devout and humble wish for finding the right path. Always a favourite with Finns, it found its way into the Hymnal of the Evangelical-Lutheran Church of Finland in 1986.

The Winter War was followed by a brief interim peace, cut short when Finland joined Germany’s invasion of the Soviet Union in June 1941 and the Continuation War began. This generated a number of works of musical propaganda. Ahti Sonninen, for instance, wrote his Itäkarjalainen sarja (East Karelian suite, 1942) and Vienalainen sarja (Dvina Karelian suite, 1943) while working at the radio station at Aunus deep in captured Soviet territory. Sibelius contributed to the war effort by arranging the Finlandia Hymn for male choir in 1940, although this took quite a lot of persuading.

Aarre Merikanto combined male choir bravado with powerful orchestration in Ukri (1938–1943), but in Thermopylain laulu (Song of Thermopylae, 1943) he reverted to his 1920s Expressionist style. A male choir was also selected by the most pro-Nazi of Finland’s leading composers, Yrjö Kilpinen. His cantata Nordische Heerfahrt (Nordic campaign) to a poem by Ursula von Siemens-Blücher was completed during the interim peace to celebrate the capture of Narvik in Norway by the Germans. Once the outcome of the war became evident, Kilpinen abandoned his work on a cycle of 78 songs setting poems by Hermann Löns, a martyr poet who was a favourite of Hitler.

During the war, music was written both by composers in active service at the front and by composers back home. The best-known of the composers who saw actual combat were Uuno Klami and Einar Englund. Klami had been in the Civil Guard in the Civil War as a young man and had thereafter taken part in the Estonian War of Independence and in the Aunus Expedition to eastern Karelia. The latter is echoed in Klami’s Tcheremissian Fantasy for cello and orchestra (1931).

A new, modernist national spirit emerged in Klami’s Kalevala Suite (1933), which the composer revised during the Continuation War in 1943. Klami’s most obvious statement on the war effort is his Suomenlinna Overture (1940), but his personal experiences of the war are more closely reflected in his Second Symphony (1945). It embodies the bleakness and coldness of war – we should note that Klami suffered frostbite on his toes during the Winter War – but also the joy of its ending.

A similar spirit may be found in Englund’s "War Symphony" (1946). Englund, who was in the bloody battles at Bengtskär, did not approve of the sub-title: “My First Symphony is not a battle scene but rather an euphoric cry of joy that after years of a doglike existence in the service of the freedom of the fatherland I escaped from that hell with my life.” Englund considered his Third Symphony, "Barbarossa" (1971) to be his true war epic; it was not until then that he was able to process the enormity and trauma of the war. Similarly, Klami did not give voice to his innermost feelings about the war until Laulu Kuujärvestä (Song of Lake Kuujärvi, 1956), which merges the grotesque, surreal and elegiac qualities of war. 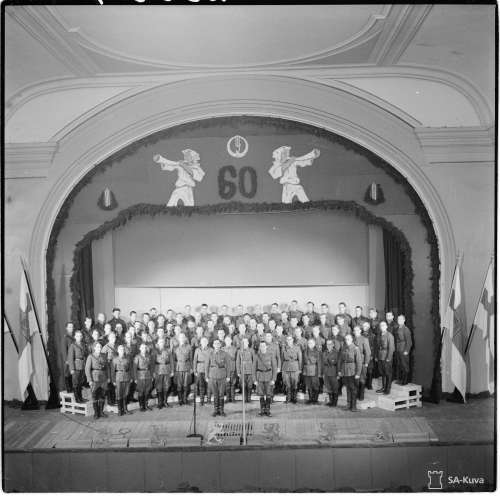 Some heroic orchestral epics were written early on in the Continuation War, but as the inevitability of the end became clear, optimism gave way to sorrow and discord. Lauri Saikkola’s Karjala palaa (Karelia is burning, 1940) and Sinfonia Tragica (1946) are laments over the loss of Karelia to the Soviet Union and the evacuation and forced resettlement of more than 400,000 Karelians.

The shadow of war touched upon works that are very different from one another, such as the symphonic ballad Laatokka (Ladoga, 1944) by Taneli Kuusisto, dedicated to the memory of his fallen brother; Palmgren’s Fifth Piano Concerto; or the opera Kaksi kuningatarta (Two Queens, 1944) by Väinö Raitio, set in plague-devastated Naples in the 15th century. Raitio’s wartime works Danse macabre and Ballet grotesque were even more graphic in describing the horrors of war.

The hegemony of National Romanticism was one of the great losers of the Second World War in Finland. Modernist thinking, European connections and a cosmopolitan outlook were the winners. The dark undertone left by the war persisted well into the second half of the 20th century. For composers in the generation that had personal experience of the war – such as Joonas Kokkonen and Aulis Sallinen – it meant a legacy of memories of austerity and harshness. But war also prompts a dialectic of destruction and salvation, such as can be heard for instance in the music of Kalevi Aho and Pehr Henrik Nordgren.

Featured photo: A marching band of the Whites after their victory on the Helsinki Senate Square. Photo: Hoffmann / Wolff / Zimmer.