PREVIOUS ARTICLES FOLLOWING ARTICLES
The phenomena grouped under the soubriquet of Finnish folk music include transnational cultural phenomena on the one hand and strong regional traditions on the other, and not nearly all of these are defined by where Finland’s political borders happened to be at any particular time.

Each age looks to the past from its own perspective. Whereas in the middle of the 19th century Finland was proud to extol the rise of a unique Finnish national identity and the excellence of traditional runo singing, in the 2020s our shared heritage – our national culture – can be seen defensively, as a stronghold providing an indigenous contrast to foreign influences, to the European Union and to multicultural society in general. Indeed, the Finns Party (originally the ‘True Finns’), currently Finland’s largest opposition party, has a media and culture policy with the stated aim of strengthening firstly the nationally minded thinking that takes pride in our Finnishness and secondly the culture rooted in our historical background, declaring that “we must not surrender our unique identity”.

But what does ‘Finnishness’ even mean? Heikki Laitinen, Professor Emeritus of Folk Music, writes: “Generally, the thinking regarding tradition is that the older it is, the more Finnish it is. [...] In fact, the opposite is true: the older it is, the more international it is. The same myths and ideas have travelled all around the world in ancient times when the now impassable cultural boundaries between continents did not yet exist.”

The very concept of folk music, along with many other terms incorporating the descriptor ‘folk’ or ‘national’, emerged out of the philosophy of the late 18th century, particularly the ideas proposed by Johann Gottfried Herder regarding the ‘soul of the people’ (Volksgeist). In the 19th century, the concept of ‘folk’, ‘people’ or ‘nation’ [the German word Volk encompasses all these meanings] acquired a new and political meaning with the emergence of the nation-state ideal. Finland, at the time an autonomous Grand Duchy in the Russian Empire, began to build an identity of her own, and eventually declared herself an independent state in 1917.

The concept of folk music reflects the notions of the era of its birth that there are distinct differences in character between peoples. However, the phenomena grouped under the soubriquet of Finnish folk music include transnational cultural phenomena on the one hand and strong regional traditions on the other, and not nearly all of these are defined by where Finland’s political borders happened to be at any particular time.

The principal instruments used in pelimanni or fiddler music – violin and accordion – are well known in many European countries. Many of the genres of music performed on them today originated in the upper classes of central Europe and trickled down to the common people, entering the repertoire of what was described as folk music in the 19th century and morphing into rich local traditions. This was the case with the minuet in Swedish-speaking Ostrobothnia, with the purpuri at Kaustinen [from the French potpourri, used in music to refer to a medley of tunes] and with the quadrille in Karelia.

The various ways in which folk music has been interpreted in various eras can still be seen for instance in the way in which archival collections are made up. These collections, in turn, have a major impact on what kind of an image of the past a contemporary folk musician delving into those archives will acquire. A time travel journey through an archive may take us through the treks of collectors visiting communities of Finno-Ugric peoples in the early 20th century, through the idyllic conception of rural people prevalent in the 1940s, through the recognition of the music of cities, of the working class and of the Roma minority in folk music scholarship in the 1960s, to the showcasing of folk music as the antithesis of commercialism in the 1970s. 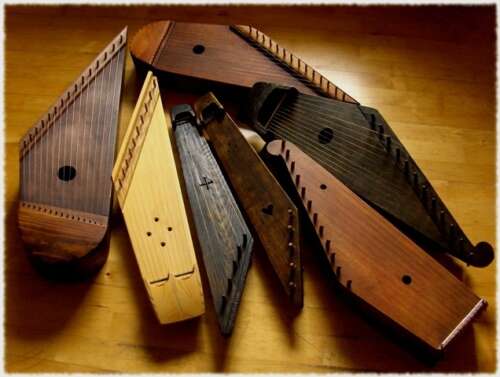 Väinämöinen’s instrument is not unique to us

Finland has elevated the kantele to the status of national instrument, and a kantele player nowadays has to deal with issues of symbolism associated with their instrument on a wholly different level than, say, a violinist. The mythical status of the kantele stems from the national epic, the Kalevala, compiled from the orally transmitted runo singing tradition; its principal character, Väinämöinen, builds the first ever kantele out of the jawbone of a pike. The very same story, by the way, appears in the national epic of neighbouring Estonia.

The idea that the kantele is unique to Finland is firmly embedded in the national psyche and may be difficult to abandon, even though there are kantele-like instruments in many of our neighbouring countries, as presented for instance by kantele player Timo Väänänen with Kari Dahlblom and Leena Häkkinen in a radio feature and a series of books in the 2000s. Väänänen pithily remarks that the kantele is older than any nation-state on Earth. (For more, read this FMQ article from 2017.)

Karelia, the East and otherness

Although runo singing has been cemented as one of the cornerstones of the Finnish identity, it too was simply part of a broader Baltic-Finnic tradition and connected to a global network of mythology. It was on the basis of the runo singing tradition that Elias Lönnrot fashioned the Kalevala, where the regional origins of the constituent poems are eradicated. Heidi Haapoja noted in her dissertation on modern runo singing that this tradition is often referred to in Finland as “our heritage”, even though the majority of the vast quantity of recorded folk poetry was collected in regions such as Dvina Karelia and Ingria, which are not and never have been within the borders of Finland in a political sense.

The issue of what it means to be Karelian is also tied up with the Kalevala. Karelia is an extensive region that straddles the current border between Finland and Russia and has for centuries been the subject of conflict between neighbouring realms. The runo singing tradition originally covered a broad geographical area, but it survived the longest in Karelia. So is the Kalevala actually a Finnish epic, or a Karelian epic, or perhaps a Finnish-Karelian epic?

The relationship between Finnishness and Karelianness is a complex issue, subsuming such sensitive topics as the expansionist ideology of the 1920s and 1930s seeking to unite all Finnish-related tribes in a Greater Finland, the events of the Second World War, the propaganda of the war years and the aftermath of the war, which resulted in a massive exodus of Karelians from territory that Finland was obliged to cede to the Soviet Union. Many of these evacuees, resettled all around the rest of Finland, maintained their Karelian identity in exile, often passing it on to their descendants, who themselves have never lived in Karelia.

The current scientific view is that the Karelians are a people unto themselves, with a distinct language and culture. This inevitably begs the question of whether the building of the Finnish cultural identity involved cultural appropriation. Heidi Haapoja has studied the issue from the post-colonial perspective, identifying folklore research as a key discipline in “merging ‘otherness’ into stereotypical Finnishness”. The mythical ‘other’ peoples of the distant past have been sought with Romantic notions in peripheral regions – in Karelia, in Ingria, and generally in the vaguely defined East – illustrating the imbalance of power. Combined with this was the tendency to render the folk tradition anonymous: “The idea of the collective origin of the material eradicates the author/performer.”

Stamps from Finland (left) and the Soviet Union (right), featuring runo singers and kantele players, and published for the Kalevala 150 anniversary in 1985.

In current public debate, it is worthwhile to be aware of the history of folk music, meaning how the concept originated and how differently it has been viewed in various eras. In Sweden, the issue of co-opting folk music for political purposes has been debated to a considerable extent, beginning with the general election of 2010, at which time many folk music and folk dance activists rose to challenge the presentation of Swedish national culture as a monolithic opposite pole to cultural pluralism. At the time of the present writing, in March 2021, a decision is pending in Sweden in a court case where the Swedish Academy (which, among other things, awards the Nobel Prize for Literature) sued the Nordfront website and the national socialist Nordic Resistance Movement for the misuse of classic literature after they had published extracts for instance from the Edda epic in a context inciting hatred and violence.

Similar efforts have not been very prominent in Finland, probably because the cause of folk culture is more commonly associated with the traditionally rurally oriented Centre Party than the more recent nationalist right-wing parties.

There have been some isolated barbs highlighting the links between folk culture and nationalism, one example being found in Helsingin Sanomat in May 2020, where the fact that Minister for Foreign Affairs Pekka Haavisto (Greens) owns two editions of the Kalevala was commented upon thus: “The Greens are often regarded as somehow unpatriotic, so having two copies of the Kalevala brings a great True Finns twist to Haavisto’s bookshelf.” The response to this was a spontaneous campaign titled #kaikkienkalevala [everyone’s Kalevala], where several people stressed that owning a copy of the Kalevala says nothing whatever about a person’s party politics, nationalism or patriotism, or lack thereof.

Being aware that many of the cultural phenomena that we regard as Finnish have actually emerged in constant dialogue with international trends does not mean that we cannot be proud of Finnish culture.

There is plenty of literature available on this topic. The bibliography for the present article includes the following [all sources in Finnish unless otherwise noted]:

The article mentions several minorities living inside the Finnish borders. In addition, there are indigenous Sámi people, whose home region, Sápmi, stretches over the northern parts of Finland, Sweden, Norway and Russia. They have a specific culture of their own - read more in FMQ-articles “If our memory fails us, we exist no more…” (Hildá Länsman's interview) and Music and identity building - World-first conservatory degrees of Sámi music completed.