Pehr Henrik Nordgren’s music often has a ritual, pictorial quality that generates a powerfully disturbing sense of atmosphere, of foreboding, as this album perfectly illustrates.

Pehr Henrik Nordgren’s music often has a ritual, pictorial quality that generates a powerfully disturbing sense of atmosphere, of foreboding, as these three works perfectly illustrate.

The Second Piano Concerto (2001) has something of the character of a ceremonial, a kind of initiation rite. It’s cast in a single span, just over 20 minutes in length, which reinforces the idea of an experience undergone, as do the exchanges of piano with the strings and percussion. Stylistically, it’s something of an unruly grandchild of Bartók’s Third Piano Concerto, with a similar out-of-doors feel, except that the outside world here is far darker and more hostile.

The left-hand concerto, written for Izumi Tateno in 2002 after he had lost the use of his right hand in a stroke, is a symphonic poem in all but name. It is based on one of Lafcadio Hearn’s Japanese ghost stories, already the basis of one of Nordgren’s Ten Kwaidan Ballads for solo piano (1972–77), where a widowed husband is told to ride his wife’s corpse through the night so as to avoid her enduring wrath.

The first third of Nordgren’s concerto is a slow section setting the scene before the man’s hellish ride begins – but it’s a fairly steady affair, not a wild, Mazeppa-like dash and soon slips back into the torpor from which it emerged.

Sitting between these two concertos is a 19-minute song-cycle from 2003 setting (continuously) four poems of Edith Södergran for mezzo, divisi strings and harp. Here, too, there is something hieratic about the music, with Nordgren’s vocal lines more recitative than melody, almost as if we were overhearing passages excerpted from some opera. Folk-rhythms break through the third song, briefly lightening the mood.

The booklet summarises the poems but it would have been useful to have the texts themselves there – if that was because of copyright problems, Alba should have said so. First-rate performances and recorded sound, though. 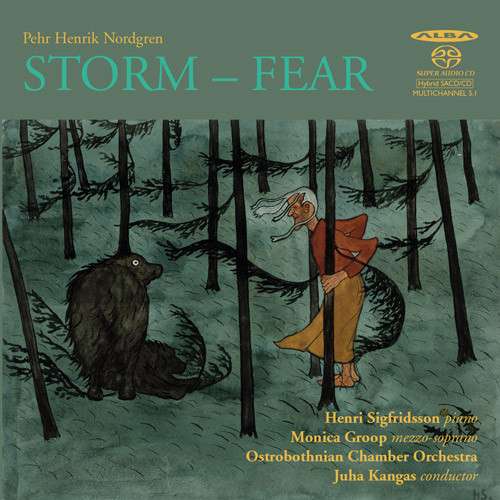