For all the grief that the coronavirus pandemic has caused, it has also brought out a great many strengths in the music sector. People in the arts are no strangers to creative, solution-oriented thinking and reactiveness, and the exceptional circumstances we are experiencing have bred novel concepts, operating models, content and applications.

When restrictions on gatherings were put in place because of the coronavirus pandemic, music quickly went online. (For more on the digital leap in music teaching, see here.) Orchestras and opera houses released their digital performance archives for free viewing, and bands and musicians began to post content online, accessible to everyone.

Orchestra musicians, while continuing to practise at home, found themselves creating content that could be produced easily and within the limitations of social restrictions: solo and chamber music performances, instrument presentations, interviews, video messages and practice diaries. Musicians thus diversified their roles and their means of communication.

Indeed, one of the most prominent positive outcomes of the coronavirus spring in the music sector was the interaction between audiences and musicians in social media. Video messages – by both individual musicians and entire orchestras – podcasts, streams and commissioned videos were very well received, and it seems likely that some orchestras will retain these as part of their regular operations going forward.

The pandemic devastated the live event business. The music sector in Finland responded to the challenge and devised guidelines for organising live events safely. Both performers and venues have adapted themselves to these guidelines. Orchestras typically began to play concerts without an interval and with added distancing both within the orchestra and in the audience. Many concerts and gigs are now performed twice in one night to make up for the loss of ticket revenue due to restricted attendance.

The entry and exit of audience members is ushered and staggered at some venues and concert halls, and several orchestras have discontinued the sale of season tickets and of refreshments at concert venues. Some of the larger orchestras have performed in smaller formations, and ensembles have also performed at locations outside concert halls, such as public libraries. Many orchestras, clubs, bands and artists have been streaming their performances live in autumn 2020.

The following is a selection of highlights among the new operating models and solutions adopted in Finland in 2020. 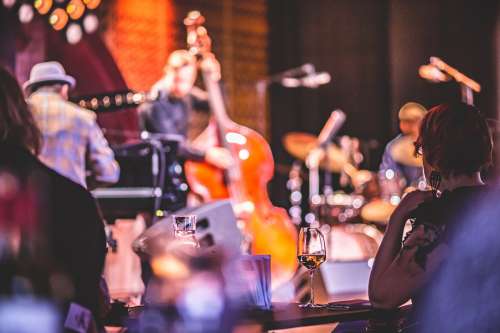 With the G Livelab mobile app you can watch live streams or order refreshments directly to your table at the club.
Photo by Laura Vanzo / G Livelab Tampere

The G Livelab clubs in Helsinki and Tampere have had a mobile app in place ever since they were opened. This app has facilities not only for ticket purchases but also for ordering refreshments directly to your table. The latter has been especially useful for ensuring safety and avoiding close contacts, given the restrictions that have been in place since it became permissible to have gigs again.

The G Livelab concept also included streaming from the very first, well before the pandemic ever broke out. There was thus a system in place for professional live streaming for which a fee could be charged. The G Livelab mobile app has also proved useful for tracing contacts among attendees if exposure to an infected person should make that necessary.

Concert Centre Finland is a non-profit association that organises live concerts and workshops at schools and daycare centres in Finland. When exceptional circumstances arose, the Centre began to produce remote concerts that helped the work of music teachers and eased the everyday lives of parents of children of daycare and school age who were working from home. The remote concerts received plenty of positive feedback, and they continue alongside live concerts with limited audiences in the 2020–2021 school year.

The April Jazz festival scheduled for spring 2020 was hurriedly converted into an event named April Jazz Subgrooves. Concerts were streamed live from G Livelab in Helsinki, the live stream being accessible for a fee on the keikalla.fi website. There were four nights of concerts, featuring both solo performances and small groups, e.g. Kari Ikonen Solo, Timo Lassy & Teppo Mäkynen and Superposition headed by Olavi Louhivuori. Several international promoters were invited to listen to the concerts remotely.

As the pandemic escalated, it began to look like all summer festivals in Finland would be cancelled. As restrictions were partly lifted, however, several festivals went ahead with either an entirely virtual offering or with a hybrid event including online components. (For more on the past summer’s festivals, see here.) 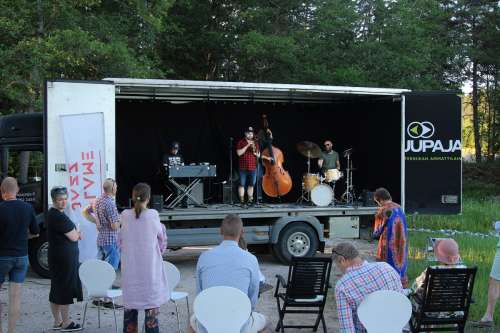 Despite the tough restrictions on public assemblies in the spring, some live music performances went ahead in Finland. In fact, performances by small groups in the gardens or courtyards of nursing homes and assisted living facilities became quite common towards late spring, and chamber music ensembles from orchestras performed at libraries and in other public spaces. As the restrictions were partly lifted, more live concerts with limited audience numbers began to happen – many of them outdoors.

The Flame Jazz concert series came up with a concept titled Flame Jazz Home Delivery & Stream. In May and June, this involved a series of jazz gigs literally delivered to people’s homes by order in the Turku area and streamed online. A band would perform on the back of a truck that drove around residential areas on demand, respecting social distancing at all times. Jussi Fredriksson, executive director of the Jazz City Turku association, reports that there clearly was a niche for such a concept, because the feedback was excellent and the gigs were quickly booked up. He notes that the bonding between the performers, organisers and listeners fostered a sense of community that is sorely needed in these difficult times. Flame Jazz intends to resume the home delivery service in spring 2021.

The Finnish National Opera and Ballet rustled up a completely new opera production from scratch in only a few months. Based on Mozart’s opera Così fan tutte and with a new libretto by Minna Lindgren, Covid fan tutte broke the audience record for the FNOB’s live streams and attracted a great deal of media attention. Its satirical take on the coronavirus pandemic in Finland in spring 2020 was commended for its quick response to current events but also criticised for tastelessly mining a human tragedy for humour. The performers in the production stressed that the purpose was not to make fun of the suffering of others.

Another exceptional premiere at the FNOB was the chamber opera Laila, with music by Esa-Pekka Salonen. The 20-minute work brings artificial intelligence into real-time interaction with audience members. (For more on Laila, see the article and the review.)

Maritza Núñez, one of the most prolific opera librettists in Finland today (see also the column Meditations of a librettist), was in Lima, Peru giving an opera workshop in early 2020 when the government declared a state of emergency. Her planned six-week stay extended to more than six months, during which time she worked on several librettos. It was during this quarantine and at Núñez’s initiative that the exceptional opera Eclipses for two female voices and chamber ensemble was created. She had written the libretto for this back in 2016, but the pandemic brought it into fresh focus in her mind.

The opera was conceived as a collaborative effort, with the music being provided by 15 composers, one scene from each. Núñez is particularly happy that six of the composers are women, because woman composers are a rarity in Peru. Eclipses was given a virtual premiere on 25 October. The production was put on by the Universidad Nacional de Música in Peru, and it was designed by visual artist Yitzhak Fowks and choreographer and dancer Ana Elena Brito, who also appears on the video.

Another libretto by Núñez was set by composer Pasi Lyytikäinen in his monologue opera Der unveröffentlichte Film der Eva Braun, which is to be premiered by the Finnish Chamber Opera on 21 January 2021.

The pandemic also served to escalate the digital leap in music exports and promotion. There are many advantages to digital solutions: for decision-makers and other professionals to attend virtual events is not only easy but also ecological, cost-effective and logistically uncomplicated.

Music Finland has been facilitating networking and international discussions online in many ways while accumulating expertise in music exports for the post-coronavirus era. The first virtual export tour, to Mexico, was organised in the spring, and in the autumn the concept was extended to other markets. International songwriting camps were organised on a hybrid model: at the sessions, Finnish songwriters were present in person, while their foreign colleagues attended virtually.

This article is partly based on Hanna Isolammi's report "The Corona Spring & Summer 2020 in the Music Field", published by the Finnish Music Council.