Väinö Raitio (1891–1945) was one of Finland’s musical modernists in the 1920s – praised but unperformed until the last couple of decades. Nowadays, his colorful orchestral works have become the focus of growing interest. This year, the Helsinki Festival started its concert programme with a one-of-a-kind performance of Raitio’s first full-length opera, Princess Cecilia (1933) – previously performed 81 years ago.

Princess Cecilia received praising reviews following its premiere in 1936: “Here, far away in the north, in a completely different Europe cut off from the rest of the world, it is possible, in a medium-sized town in a little country, to hear a European opera that is quite magnificent and highly modern in the best meaning of the word!”, wrote Friedrich Ege in the Zeitschrift für Musik after the premiere. The opera was planned for performances in Lübeck, Germany, but the war interrupted these plans. Princess Cecilia became just another dusty manuscript in the archives.

Thanks to the Helsinki Festival, copywriter/editor Jani Kyllönen, and the performers, it’s now possible to listen to this picture of its own time: charmingly eclectic, sometimes dramatic, sometimes amusing, but always colorful. Listen to the concert performance of Princess Cecilia here!

The Helsinki Festival continues until September 4, 2017, and next week the FMQ will publish more reviews of the festival concerts. Stay tuned! 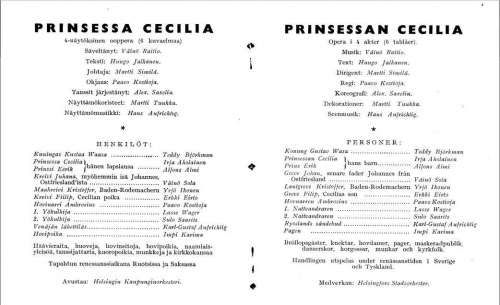 The original programme of Princess Cecilia.