PREVIOUS ARTICLES FOLLOWING ARTICLES
Curbing the climate crisis will require urgent action everywhere, including the music business. But how difficult is it to translate words into deeds for someone whose entire career is based on touring, which carries a massive carbon footprint?

“I’m finding it less and less enjoyable to go and listen to […] internationally-touring orchestras when I realise that at least 80 people took a plane for a single concert; particularly when I know that I can listen to a similar interpretation of the same piece by a more local orchestra,” wrote composer Fabién Levy in VAN magazine in September. Levy is not alone in this sentiment: awareness of global warming is increasingly fostering a cognitive dissonance between individuals’ concerns and their actions.

But what potential do we have to change the touring industry?

“When your operations are market-driven, practices are dictated by profitability,” says Mikko Sirén, drummer of the cello metal band Apocalyptica, the majority of whose gigs are abroad. “Although [CO2] compensation for one flight is not all that expensive, if you multiply that by 15 people flying 100 flights a year, it eats substantially into the relatively thin profit margin that may have been budgeted, say, for paying for a recording session in the following year.”

By contrast, Sirén goes on to list elements in touring where low-emission approaches can have cost benefits.

“The main thing is to optimise your travel and to minimise the amount of gear you have to haul with you. By hiring gear from local tech operators, we can reduce our cargo from 50 crates to 18 crates. Before the tour, our audio engineer pre-programs settings templates for the most common digital mixing consoles, so we don’t have to lug our own 300 kg console around with us. When we tour Europe, we generally share the stage with a couple of other groups, and we make a point of sharing the gear we use.”

Reducing waste, preferring digital tickets and including public transport in the price of concert tickets are examples of small but cumulative measures introduced by Apocalyptica. Sirén does acknowledge, however, that in the end these have a minor impact on the overall carbon footprint.

“Promoter Rowan Rafferty once said sarcastically that the only environmentally sustainable event is a cancelled event. I may be naive, but I would like to think that the good we do with our music outweighs the adverse impacts of touring. The most important thing we can do is exert soft influence: convey the right messages to the audience to motivate them to make changes. Preaching would be counterproductive. Encouragement is better than guilt-tripping.” 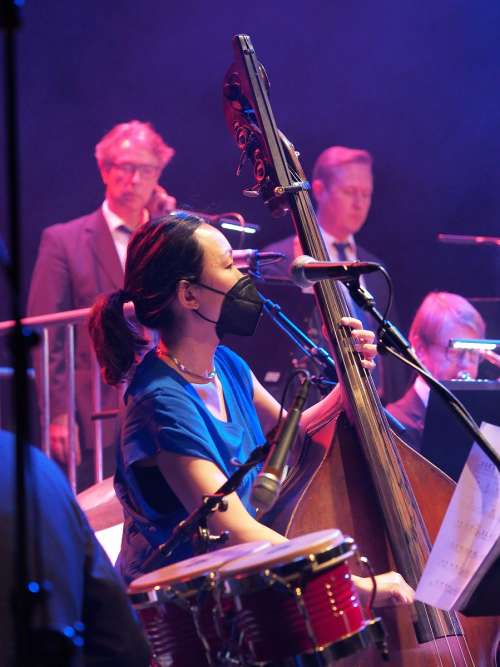 Linda May Han Oh on a gig with UMO
Photo: Olli Nurmi

The environmental sustainability of concerts was the theme for the Nordic Jazz Comets project in 2020–2021.

“Most major jazz festivals already have comprehensive environmental plans and practices in place, but with small operators it’s a mixed bag. Some had to begin with very basic practical measures,” says producer and publicist Raisa Siivola, who managed the project on behalf of the Finnish Jazz Federation.

Audience mobility generally causes a larger carbon footprint than the performing artists do. The electricity and heating consumption of the restaurant or concert venue and where that energy comes from must also be considered.

“The further we go with analysis, we find that even choosing what food is served is important. We do not want the concert organiser or the performing musicians to be saddled with the sole responsibility for sustainable development; it must be a shared effort. What we found in the project was that people are afraid that all this will eat into our resources in what is already a difficult business, but my view is that sustainability carries the seed of improved cash flow in the future. If we cannot find the money to invest in this now, we will be shutting even more doors from ourselves.”

The five tours in the Nordic Jazz Comets project were designed with environmental impacts in mind. For instance, instead of a Finnish band first traveling to Denmark and then a couple of months later to Sweden, the band’s gigs in these neighbouring countries were arranged as a single tour.

“Because a zero-emissions policy is impossible to implement in practice, we should not only think about CO2 compensation but also rethink the whole concept of touring. What and how could bands have to give to their local community? A one-night-only gig is hardly enough for engaging in grass-roots outreach work.”

One of the new concepts being floated is the Jazz Finland residency, jointly launched this year by the Finnish Jazz Federation, the Sibelius Academy of Uniarts Helsinki, the Finnish Musicians’ Union and UMO Helsinki Jazz Orchestra. The first resident artist in August 2021 was drummer and composer John Hollenbeck, and the second was double bass player Linda May Han Oh, who gave concerts in Helsinki, Turku, Tampere and Kotka in October, gave classes at the Sibelius Academy and contributed to two studio sessions.

“Top performers usually come to Finland for a quick in-and-out,” says Maria Silvennoinen, Executive Director of the Finnish Jazz Federation. “What we want to achieve is to have more international visits for longer-term artistic collaboration with UMO, with the Sibelius Academy and with freelancers. The residency model employed here addresses all these needs quite well.”

The artists invited to the residency are paid a monthly stipend of EUR 2,200 in addition to travel and accommodation, plus separately agreed fees for any concerts, masterclasses and other collaboration. This makes the residency a profitable consideration even for an international jazz star.

“It will take quite some time for us to be able to properly assess the impacts, but we might note for example that Hollenbeck met with about 50 Finnish jazz musicians, and some of the fruits of these collaborations will no doubt be demonstrated next year.”

Silvennoinen notes that the notion of extended visits emerged several years before the pandemic shut everything down.

“We understood that we will continue to need international contacts and collaboration but that they will need to be on a more sustainable basis in the future. Short visits are simply not ecologically sustainable. An extended visit is a win-win scenario, because the impact is greater and the local community benefits more.”

Extended residencies have been seen in classical music too: the Finnish Radio Symphony Orchestra hosted pianist Conrad Tao for two weeks in January 2021, and conductor and composer Thomas Adès was in Helsinki for nearly all of October at his namesake festival.

“There’s no point in bringing anyone here from New York for one week. We try to coordinate visits with other agencies so as to minimise the number of long-haul flights,” says Tuula Sarotie, general manager of the Finnish Radio Symphony Orchestra. The orchestra complies with the social responsibility principles of the Finnish Broadcasting Company, one aspect of which is environmental impact.

“The main thing for us was to reduce the frequency of touring substantially. As recently as in the 1990s, the FRSO might have five or six tours in a single season. However, it is not an option to decree that all our soloists and conductors have to be Finnish or that all visitors have to arrive by surface transport.” 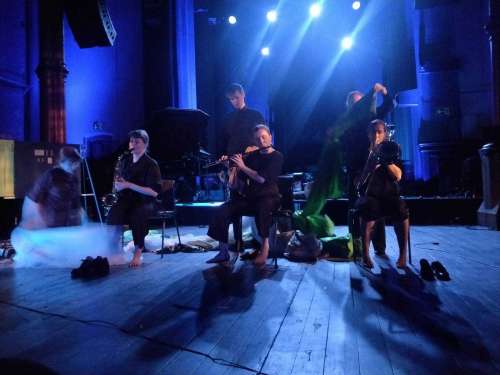 In the freelance sector, Helsinki-based contemporary music ensemble Fabric Union travelled by train and ship on their three-concert tour to Gothenburg and Oslo with TTCM (NO), and Mimitabu (SE).

“Travelling by land has long been my preferred mode of travel, and the others were fine with it, even though it took more time,” says composer Lauri Supponen.

One of the musicians had to fly because of scheduling issues, but Supponen notes that minimising the carbon footprint was neither the theme nor the explicit purpose of the project.

“Most of us shared our experiences of the trip on social media. When people asked them ‘How was the flight?’, they answered ‘Actually, we didn’t fly’. This serves to remind people that flying is not the only alternative for touring musicians,” Supponen explains.

“As a human experience, it was great fun that we got to spend those long journeys together. It was a very practical way of bonding. My piece, for instance, involved a lot of bodily contact and power games that required trust,” says composer Matilda Seppälä, who was also on the tour.

Both composers are active in the Extinction Rebellion, whose purpose is to exercise civic activism and civil disobedience to accelerate emission reductions. Climate issues are issues of life and death for them.

“I stopped flying abroad for holidays long ago, but for a long time I thought that it’s OK to fly every now and again for professional reasons. Now even that doesn’t seem so self-evident. It’s very hard for me not to consider the consequences of my actions,” says Seppälä. “Air travel only accounts for a small percentage of the world’s emissions, but in an individual’s carbon footprint the largest components are flights and food. When we think of conductors whose jobs involve flying around the world all the time, that sort of thing obviously can’t be sustainable.”

For composers to be present in person at premieres of their works is vital not just in the interests of gaining new commissions and performances or for networking, but also because often the score of a contemporary work is not enough to convey how it should be performed, and hands-on coaching is essential.

“New ideas very often emerge in dialogue in the context of a trip abroad, a festival or a residency. But this is exactly why we should think about the ecological footprint of travel and how to reduce it. We have very thin musical connections with the Baltic states or St Petersburg, which are destinations allowing for more sustainable travel,” says Supponen.

“Although under the current circumstances it is not possible for a professional composer to stop travelling altogether, I can envision a music sector that is more local, more interactive, more generalist and more present in the everyday lives of people in the community. Composers could play a local role in that,” Seppälä says. Both she and Supponen feel that an artist’s work does not exempt the artist from responsibility for its environmental impacts.

“Some people seem to think that high culture would continue to exist no matter what happens. It is naive to imagine that addressing the challenges of the eco-crisis would not pre-empt financial support for the arts, for instance. Even now, arts and culture were the first to be cut off when the pandemic hit,” Seppälä points out.

“Our times inform all the art we create. Do we want the ecological crisis to be explicitly present or leave it as an undercurrent about which we are doing nothing?” Supponen continues. “I challenge all my colleagues to acknowledge that we are all ecological composers. After all, it would be quite difficult to write music for the world to hear if there is no longer a world to hear it.”