”Could we talk in 10 minutes, I’m just returning some backline drums from our tour?” says Charles Gil, picking up the phone on a dimly-lit November afternoon. It’s business as usual for the French producer who has lived and worked in Finland since 1995, introducing Finnish audiences in places near and far to high quality improvised music from France, Finland and beyond time and again.

2020 has presented serious challenges to anyone working in the fragile field of independent music. Yet, Charles Gil presses on, producing and managing successful tours under his trusted brand ”Vapaat äänet” (”Free Voices and Sounds”). He’s back from a nine date tour of the Baltics and Finland with the French saxophonist Sylvain Rifflet. Everything went well, which is a feat unto itself during these ever-shifting times.

”Of course it would have been easy to just cancel everything in the light of what’s going on now with the pandemic,” Gil explains, ”but I wanted to figure out how to keep things moving in a safe way and in the end, it was possible. Thankfully, all of our partners and venues were on board with taking things forward. I feel that you need to stay resourceful and active even during these times. People need to hear some live music whenever possible.”

That ethos has carried Charles Gil far, from his days of early tour production based in his hometown Lyon, France, to being one of the key ambassadors of creative music in the Finnish scene. His connection with the distant North was sealed by moving to Helsinki in 1995 after meeting his future wife, photographer Maarit Kytöharju at Tampere Jazz Happening the year before, while Gil tour managing Workshop De Lyon.

In 2010 Gil received the accolade ”Chevalier de l’Ordre des Arts et des Lettres” and in 2016 he was made the ”Chevalier of the French National Order of Merit” for his remarkable contributions to Finno-French jazz culture. In 2004, he was awarded the annual ”Varjo-Yrjö” award for the advancement of Finnish jazz culture as only the second ever awardee of that ongoing prize. (It’s fitting to note here that his wife Maarit, known as Finland’s foremost live jazz photographer, was awarded the same prize in 2016 – a fact that speaks volumes of the importance of the dynamic duo for the Finnish jazz scene.) 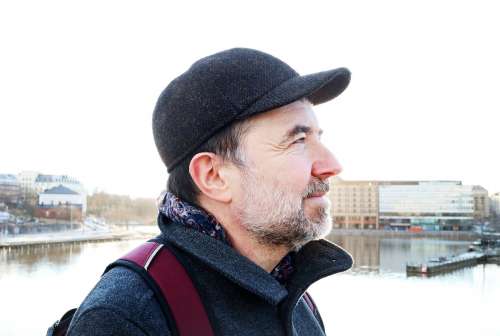 A common denominator in tours produced by Charles Gil is that the musicians seem very happy, no matter what the project is. It’s no surprise, then, that Gil sees the journey itself a crucial part of the process of presenting live music.

”To me the concept ’slow touring’ seems natural,” he says. ”It relates back to ecological issues, but also to the sheer convenience of being on the road in a comfortable way and sharing the space with the musicians. We drive whenever we can, avoiding the stress of flying. It’s also important to have a day off every now and then, at least once during a tour of two weeks. You also need to eat well and allow everyone to take their own space when needed.”

Gil’s philosophy has been shaped by his extensive touring, and he simply believes in learning by doing. ”When I’m out there with the band, I can learn about my mistakes first hand as I suffer from them at least as much as the musicians,” he laughs.

Another key facet of the touring cycle of Vapaat äänet seems to be that Gil’s planning doesn’t overlook any parts of the country. Remote small towns sit on the itinerary side by side with more high profile touring destinations with remarkable ease, often offering the year’s jazz highlight in many a culturally sidestepped location.

”Often I try to expand my touring horizon by simply talking to people and trying to find out what’s happening out there,” he explains. ”Say, if we’re due to stop by in Joensuu on an upcoming tour, then maybe I’ll find out if there’s anybody we could reach out to in Lieksa to offer another concert in the area, even if those would be really small places.”

In a large and sparingly populated country such as Finland, you really need to be a believer to take avantgarde programming far outside of the traditional touring circuit, but Gil has done it successfully for more than 20 years now, as 2021 marks the 25th anniversary of Vapaat äänet productions in Finland. 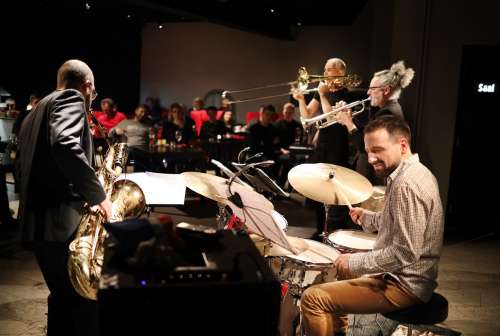 Journal Intime and Jeremy Piazza on a gig in Tallinn on a Baltic tour just before the lockdown in March 2020.
Photo: Maarit Kytöharju

The mindset of a festival booker

One particularly important Finnish town for Charles Gil is the fittingly remote Raahe, in the Northern Ostrobotnia region. Not only was the first ever Gil-produced Finnish tour gig in Raahe, but in 2014 he also took over as the Artistic Director of the town’s much loved annual jazz festival Jazz On the Beach (”Raahen Rantajatsit” in Finnish). With the booking profile combining adventurous jazz with a couple of hand-picked Finnish crossover names, Jazz On the Beach is arguably the most idyllic weekender on the Finnish jazz calendar.

Or at least we hope so. ”At the moment there are only some preliminary plans for 2021,” Gil says, ”but we aim to get together with the festival team at the end of the year to start figuring out what would be possible next summer. Thankfully, with such a compact event, you can wait a bit longer before calling the shots during such uncertain times.”

The experience of being a festival curator is not a new one to Gil, who cultivated the Ultra Music Meeting at Pori Jazz for 11 consecutive editions from 2003 to 2013. These booking experiences have brought new perspectives into his work.

The true value of things

The way Charles Gil speaks about producing tours and curating festivals goes deeper than the run-of-the-mill business side of things. The softly-spoken gentleman seems like the right person to offer an analysis of what’s to come after all ”this”. Is there a positive takeaway for the future of arts here in the covid-ridden era of non-performance, hidden somewhere?

”Well, at least we’re talking about things at a very grassroots level now. Do we need live music? It seems clear to me that we do, and now everyone I meet at events such as Tampere Jazz Happening just now is saying the same thing. We’re seeing the true value of things when they are endangered and it’s evident that producing live music brings a lot of joy and meaning to people.”

”I treat every gig as a possibility. Each of them is an open invitation. And every time a gig has to be cancelled, it’s like missing an important meeting. I think it’s crucial to try to continue producing events even now and finding new ways of making them happen safely.”