In a sun-drenched town only 200 kilometres south of the Arctic Circle, jazz connoisseurs mixed with locals to enjoy their 31st festival of music, at the Jazz on the Beach in Raahe, Finland.

Frenchman Charles Gil has been at the helm of the Raahe jazz festival, Raahen Rantajatsit, since the summer of 2015, and from that time the festival has confirmed its place as the most edgy summer jazz gathering in Finland. Gil is from Lyons in southern France where he worked with a local association ARFI. Moving to Finland at the end of the 90s, he established the Vapaat Äänet agency which has become synonymous with the exchange of cutting-edge jazz artists between France and the Baltic area.

In a town boasting only a little over 20,000 inhabitants, Gil again assembled a roster of artists from across the spectrum of Finnish jazz and beyond, from the rawest of free jazz to a selection of smooth, if uncompromising, local musicians.

A spectrum of sounds and events

Whereas the festival had taken place for 25 years previously on a beach site just out of town, Gil moved the location back into town, using a variety of smaller outdoor venues but retaining the inclusion if not encouragement of artists from the edges of jazz.

This year’s festival also included free events in two local libraries as well as workshops that brought the total number of visitors to the three-day event to exceed 2000. One such free event was the opening concert held in the blazing sun of the summer heatwave, leaving two local bands sweltering on the stage of Härkätori, right in the heart of Raahe. A large crowd witnessed the massed acoustic guitars of Raahe United, a local community project, and the trumpet/vocal lead of Ruga Rado, both playing a selection of traditional and Finnish covers. 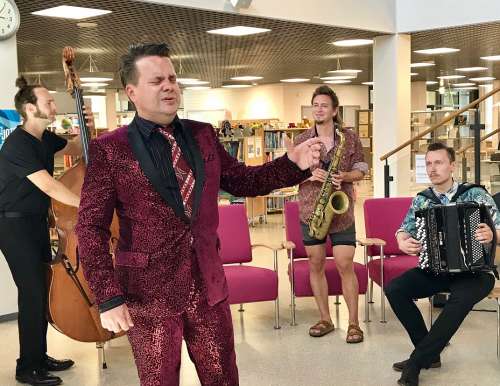 A mix of influences

The first night at the main stage, a section of the quay behind the nineteenth century Customs House, featured a mix of local and foreign sounds, both fronted by vocalists singing their own lyrics. Local born singer-songwriter Lotta Jääskelä, working here as Ylva Haru, has two albums to her credit, and sang a selection of intimate self-penned songs backed by a solid double guitared folk-rock quartet. Many were taken from her latest album Linnut [Birds], and she sang in the dimming light as a group of swallows rested on the stage awning, then dived and soared over her audience.

The second band this night, instrumentalists Sole Azul, also featured songs where the intimacy of the lyrics were complemented by the intricacy of the music. Singer Jaakko Laitinen (also band leader of Jaakko Laitinen & Väärä Raha) had joined principle composer Harri Kuusijärvi in writing the music for five pieces featured in Sole Azul's set, and the bitter-sweet themes of his words were reflected in the angst and discord of modern tango compositions. Kuusijärvi graduated as a solo accordionist from the Sibelius Academy in Helsinki and now is based in Lapland. With two solo albums to his name, Kuusijärvi has developed a singularly experimental approach to his instrument, but typically uses minimal electronic effects. His tunes are unpredictable but recognisably tango based, a style of music that Finns have adopted in their love of exaggerated melancholy and despair.

The bassist Eero Tikkanen and tenor saxophonist Pauli Lyytinen bring some compositions as well as their own experience and radicalism from other contemporary bands, Mopo and Elifantree respectively, making Sole Azul an exciting contributor to what they describe as 'post apocalyptic tango'. Despite these radical associations, the band played a prominent role throughout the festival with a children's workshop, two library appearances, their own set and on the final night leading a dance jam. 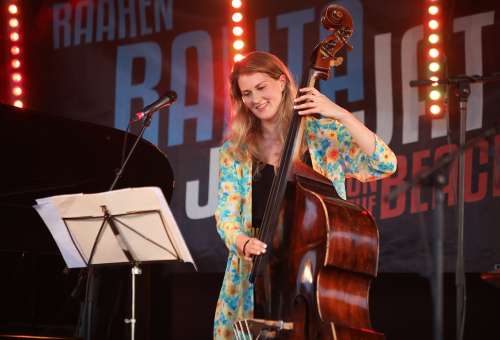 The second day of the festival involved principally Finnish bands, most of whom played on the Ruiskuhuone stage, behind the Customs House. Of the three appearing there the highest profile was the Finnish quartet Kaisa's Machine. Led by Kaisa Mäensivu, a prize-winning bassist as well as composer, she is now based in New York where she completed her studies. Her band has one CD to its name, and played a lively set comprising mainly these tunes.

More radical in their approach that night were the collective MINE, featuring singer Selma Savolainen. With a voice and an approach reminiscent of Carla Bley, Savolainen was principally centre stage working around the sparse piano lines and accompaniment, and keeping the audience guessing her mood.

Outside the town centre, but still only minutes walk away, Hot Heros (no normal heroes here!) played a blistering set in the late afternoon heat. Featuring two members of the Tampere based trio Black Motor, Sami Sippola on tenor sax and Ville Rauhala on bass, the band played the same hard-driven free jazz as with their previous band, but with crossover percussionist Janne Tuomi behind the skins. Where Black Motor had played a free-wheeling, Albert Ayler style of music, the Heros start at least from a more concrete base. Their last two albums, providing most of their repertoire at this show, take as their point of departure inspirational scenes from Finnish and American folk and popular culture, and then proceed to tear the motifs to shreds.

On a stage set up amid the grass behind the Lang Rooms, Hot Heros proved that musical dialogue of an intensity usually witnessed in darkened cellar bars can also be aired in the full glare of Finnish summer sun, in a garden behind a very genteel tea-room, without any loss of face or faithfulness. 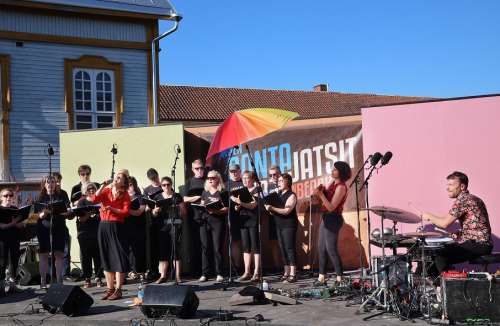 With an approach to festival running that welcomes just such a contrast of form and content, Gil staged another fascinating mix of styles when he invited the French voice and sound trio Three Days of Forest to perform in Raahe. While all other performers had used Finnish language as their medium of song and communication, here he introduced a French band working in English, and threw them together with a local Finnish-speaking choir.

Working with the vibrant, assertive poems of African Americans Gwendolyn Brooks and of Rita Dove, Three Days of Forest use explosive percussion and a very heavily processed viola to counterpoint the voice of their singer Angela Flahault, putting the texts into an otherworldly perspective. To this they added the sounds of the 14-strong choir Raahen Laulu to bring their show very much back to earth.

While the Finnish bands Litku Klemetti, Bowman Trio and Linear John also played sterling sets at Raahe, the main spotlight peering through the evening gloaming of the final night fell on Näissam Jalal, a singer and flautist originally from Syria. With her musicians Claude Tchamitchian on bass and Leonardo Montana on piano forming the project Quest of the Invisible, this expressive and enchanting music steered the festival to its climax.

A small town on the north west coast Finland had again set its sights far across everyday horizons, and carried many listeners away with them there.