The composer Selim Palmgren walked a tightrope between national and international trends in music. He was part of the Finnish national music movement but tried to combine this with a more international outlook.

In the late spring of 1914, the conductor Robert Kajanus wrote to Selim Palmgren, who was living in Berlin at the time, and asked if he had any new orchestral works that Kajanus might perform. Palmgren replied that he had nothing at that precise moment and went on: “I have mainly been spending my time this season, as I did last season, trying hard to write Finnish piano music that is also fit for European audiences…”

Palmgren’s answer sums up the tension he was experiencing as a composer – how could he, on the one hand, write “European” music and, at the same time, contribute to the creation of “national” music. At home he had to appear to be “Finnish” enough so that he could take part in seemingly important national projects to build Finnish cultural identity. Outside Finland, though, he had to come over very much as an international, even “non-nationalistic” composer, to avoid any accusations of provincialism.

Far more of this sort of tension is evident in Palmgren’s career than in that of most of his Finnish contemporaries. The main reason is his very cosmopolitan working life. He lived a long time in Italy, Berlin, Stockholm, Copenhagen and, in the 1920s, in the United States.

Palmgren’s comments to a magazine interviewer shortly after arriving in America in March 1921 make it clear he was quite aware of the problem:

“I’m interested in all folk music, because I have used quite a good deal of that of my own country, though my work is less characteristic of the real Finnish music than that of Sibelius. They told me in Paris when I was there recently that the French conductors found Sibelius’s orchestral works difficult to conduct but that mine were easier. I suppose that means that my music is less local in character.”

Selim Palmgren (1878–1951) grew up at a time when national ideals dominated Finnish music. Although Palmgren made his own contribution to the development of national music, he was not the same sort of mouthpiece for Finnishness that Sibelius was. (See also Olli Heikkinen's article “Utterly Finnish, peculiarly original” on Sibelius.)

In his memoirs, Palmgren describes his encounter with Sibelius’s Lemminkäinen Suite: “They who had the chance to see and hear Jean Sibelius himself conducting his Kalevala tone poems at that time – and that would have been 1895–99 – can’t have forgotten the experience. ‘My dear Palmgren’, I imagined him saying, just between you and me, ‘All this Kalevala business hasn’t got a lot to do with you – let old Sibba (Sibelius) take care of it and you try and think of something else!’ And of course I did…”

The national epic, Kalevala, did not interest Palmgren as much as it did a lot of other Finnish composers of the day, but even he wrote a few works relating to it. They also include a work on the Lemminkäinen theme. Its title is even the same as the opening movement of Sibelius’s suite: Lemminkäinen ja saaren neidot (Lemminkäinen and the Island Maidens). Unfortunately, both this orchestral work completed in 1905 and Waeinemoeinen, also written for orchestra the following year, are lost. From the reviews, however, it seems that in them Palmgren had experimented with Finnish national material derived from old rune songs.

But the Kalevalaic rune song material of Lemminkäinen and the Island Maidens and Waeinemoeinen are a departure for Palmgren – perhaps just a nod in the direction of national music. The rune song represented the oldest stratum of Finnish folk music, one that flourished mainly in eastern Finland. As someone who used folk music, however, Palmgren was clearly more interested in its more recent forms, to be found in the west of the country.

Palmgren’s piano and song output consists of a huge number of direct arrangements of folk tunes as well as pieces that are more freely influenced by folk music. For example, two of his five piano concertos, the first (1904/05) and the third (1916), also known as Metamorfooseja (Metamorphoses), are based thematically on Finnish folk tunes.

Palmgren’s choral music too was clearly based on national ideals. He also worked to promote Finnish choral music when he directed the YL Male Voice Choir in the periods 1902–1903, 1905 and 1927–1928. Music for male choir that, at the start of the 20th century, was most clearly able to interpret Finnish national feeling.

Up to the First World War, Palmgren was mainly based in Berlin when abroad. He made five study trips to the city between 1899 and 1906 and lived in the city later on in 1907–1908 and 1912–1914. He managed to forge relationships with a good number of musicians working there. One of the most important was the piano virtuoso Ferruccio Busoni, under whom Palmgren studied on two occasions in Berlin, and also in 1901, on one of the famous summer courses held at Weimar.

Contact with Busoni continued after the masterclasses. Palmgren went to show him his work and also received help from him in trying to find a publisher. In 1912 he even had the idea of asking Busoni to conduct the first performance of his third piano concerto, Virta (The River) (1912). This plan fell through, however. In February 1913 Palmgren showed the concerto to the conductor Arthur Nikisch, but nothing came of this either. In 1916, however, Nikisch conducted The River in Leipzig [originally in the printed article: Helsinki. Corrected in May 2021.] Palmgren himself actually gave the first public performance of The River in October 1913. In December that same year Friedman performed it [for the first time] in Germany, in Berlin, with Palmgren conducting. The piece was a resounding success. Friedman and Palmgren had to take six curtain calls, and the reviews were ecstatic.

The outbreak of World War I severed Palmgren’s links with Berlin. He then spent lengthy periods of time in Stockholm and Copenhagen. In 1921 he went off to the United States for five years. At first he toured the country performing with his wife, the singer Maikki Järnefelt-Palmgren, and on a couple of occasions he also performed with the Australian-American composer-pianist Percy Grainger. Between 1922 and 1926 he was professor of composition at the Eastman School of Music in Rochester. 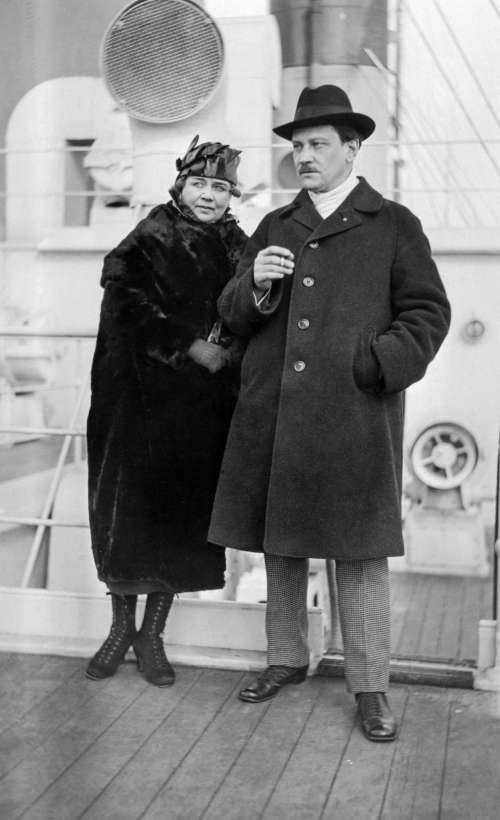 Selim Palmgren and Maikki Järnefelt-Palmgren on a ship to New York in 1921.
Photo: Arthur Coit / Museovirasto

Palmgren’s most “international” music was to be found among his piano works. His own appearances as pianist relied much on his international acclaim as a composer of piano music. This of course was also a type of music that could easily reach the attention of those in other countries. And well before Palmgren got to America his piano music had already achieved great popularity there.

The roots of Palmgren’s piano music lie in Late Romanticism, but he also often moved in the direction of impressionism. The first signs of this are apparent in a few works written in Italy and Berlin between 1907 and 1908. In fact, he was the first in Finnish music to adopt the impressionist style. Also new to Finnish music at that time were Palmgren’s cautious experiments in a sort of modernism that anticipates Prokofiev.

When Palmgren consciously tried to sound “European” in his works for piano, in Finland he had to listen to the criticisms made not just of his modern harmonies but also of his “non-Finnishness”, Impressionism and even wary attempts at modernism in Finland were all too readily seen as oddities and music that was alien to the ideals of national music.

Nevertheless, Palmgren’s piano music also had a firmly national dimension to it. This was evident, for example, in many of the folk song arrangements made for piano but also in the hints of nationalism in a good number of other works and the titles of pieces that were connected with Finland and things Finnish.

From national to international opera

Palmgren’s work as an opera composer also illustrates his objective to carve an international career. He actually only completed one opera, Daniel Hjort, which had its first performance in Turku in April 1910, but the composition of opera was something he dwelled upon for many years afterwards.

Daniel Hjort is based on a classic of Finnish literature by J.J. Wecksell and is rooted in Finnish history. However, the reviews made much of the work's modernist idiom and lack of national flavour. For example, its use of the whole tone scale showed the influence of trends in foreign, mainly French, music.

After Daniel Hjort, Palmgren at first thought of writing an opera based on Aleksis Kivi’s Seitsemän veljestä (Seven Brothers) and Nummisuutarit (The Cobblers on the Heath), which are keyworks of Finnish literature. Both projects were shelved indefinitely.

When in 1912 Palmgren moved to Berlin with his wife, it was only natural for him to start planning the composition of music that would have a wider international appeal. He commissioned a libretto in German from the Berlin newspaper critic Hermann Kienzli for the opera Peter Schlemihl, based on the short story by German Romantic writer Adelbert von Chamisso. The opera’s composition, however, did not get off the ground.

Palmgren reached a turning point in spring 1914, when he got hold of a new and interesting opera libretto. It was based on the horror film classic Der Student von Prag, which had been released only the year before. Its scriptwriter, Hanns Heinz Ewers, had also produced Palmgren's libretto. After Palmgren had composed some 40 minutes of the piece the First World War broke out. The work was interrupted, and he never returned to it later on.

With its psycho-expressionist elements, Der Student von Prag would have been the start of a new trend in Finnish opera and one that had obviously moved away from the ideals of national music. The fact that a popular film had been chosen as the subject and that Ewers, who was at the peak of his writing career, was the librettist says a lot about Palmgren’s aim to succeed on the stages of central Europe.

This article was first published in FMQ 1/2009 and is now (May 2021) republished with the kind permission of the author.