“The best collaborations empower or even improve their participants. Whenever guitarist Marzi Nyman stepped up during Silence Festival he seemed to lift the creative discourse to another level with his gregarious, joyous musicianship.”

On the morning of Silence Festival’s last day, Sanja Kosonen crossed the wide, fast-flowing Ounasjoki River on a tightrope. This was how the festival in Kaukonen was supposed to have opened three days earlier, before Storm Solomon intervened. In the end, the timing worked out quite well. After three days of complicated and unpredictable experiments and collaborations, here we had the chance to witness something highly demanding yet beautifully simple. Would Kosonen make it across or wouldn’t she? She would, of course. And she did. The villagers applauded, and so did the circus artists, dancers, poets, musicians and volunteers who were there to see it happen.

But even in her solitary ropewalk, Kosonen wasn’t quite alone. Ready for her on the river’s west bank was guitarist Marzi Nyman. He played psychedelic loops and grinding charges on his electric guitar, partly encouraging Kosonen and partly reflecting on her gravity-defying feat. It was Nyman’s guitar that underlined the little miracle in the act, and which focused the wonder and appreciation of the crowd. Looking back on the event, it’s impossible to separate Nyman in his red pinstriped suit on the riverbank from Kosonen in her white dress on the rope.

Kaukonen sits 130km north of Rovaniemi in the heart of Lapland. Here in the north, humans are reliant on one another. Silence Festival – designed by circus artist Sakari Männistö and composer Outi Tarkiainen – reflects that, shunting together artists of different disciplines and backgrounds, seeing what might emerge from the silence as a result. The festival encourages immediate collaborations between humans who may not know each other and have little time to prepare.

At one of the evening soirees an accordionist and juggler were thrown together. They had never shared a stage; they hadn’t even properly met. Their short performance didn’t change the world. But it had some things to say about movement and biology and their relationship to sound and melody.

The best collaborations empower or even improve their participants. Whenever Marzi Nyman stepped up during Silence Festival he seemed to lift the creative discourse to another level with his gregarious, joyous musicianship. When he joined the Kaukonen village rock band, their David Bowie covers became freer and more inventive. At Särestöniemi Museum, Nyman stood on the steps of Reidar Särestöniemi’s atelier, belting-out riffs on his guitar like a rock star to the tree-lined, stadium-shaped meadow. It was an extraordinary combination of sight and sound.

When Nyman’s three-piece band played at Kaukonen’s Villa Magia on Silence Festival’s opening night, the storm played havoc with the electricity. But the moments when power was lost were the most inventive and exciting. Not just for us the audience, but for Nyman and his collaborators too – Lauri Sallinen on clarinet and Niko Kumpuvaara on accordion. 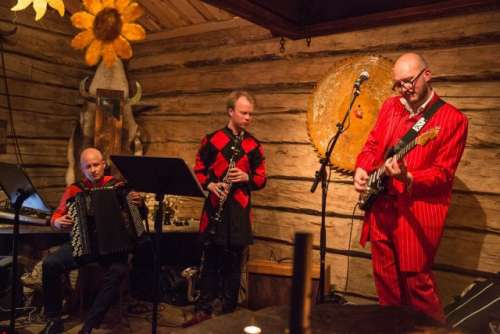 The next day Sallinen duetted with bandoneón player Henrik Sandås. The clarinetist plays as though he’s a musical free spirit, intuitive and whimsical. But Sandås never lets anything pass without examination. He eyeballed his partner terrifyingly for the duration of their duet. The result was reactive and intense, but had the wings of song too.

That pair was reunited at the festival’s climax at Särestöniemi Museum. It started with artistic director Outi Tarkiainen’s wind-blown Kunnes kivi halkeaa (2008), Minna Pensola digging purposefully into her violin while Elice Abonce Muhonen was yanked up to the ceiling by her hair. After that, Sallinen and Sandås engaged in the tight dance for two that is Øyvind Mæland’s Pas de 2 while acrobat Saku Mäkelä and dancer Riia Kivimäki entwined themselves just like the instruments, but also trampled on each other, collapsed and fought as the instruments did too. Next came the emotionally strenuous A Space In Between, choreographed by Alex Newton and Anthony Curt. Here dancers Emma Lister and Oliver Speers were a couple slowly wrenched apart from one another while Minna Pensola and pianist Anna Laakso protested in the corner with the sounds of Romantic Rautavaara and Kuula.

At Kittilä Church, Sandås played music from Argentina on his bandoneón while poet Juha Rautio recited his own verse. There is something deeply moving in Rautio’s words and their delivery even if you understand no Finnish at all. But that was probably connected to the experience of hearing bittersweet Argentinean tango delivered in a country that has since made the form its own. Does Piazzolla’s La Familia end with the same transfiguring cadence as Sibelius’s Tapiola? It sounded so. 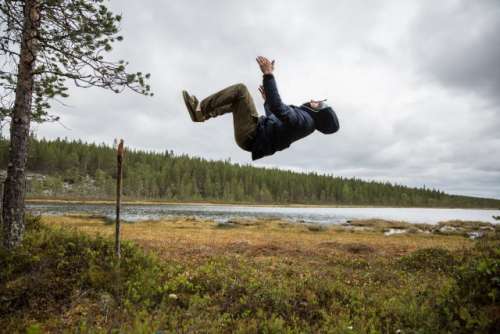 Other notable encounters included Aino Eerola and Jyri Pirinen sensitively improvising a soundtrack to Elina Oikari’s film Sound of the Tempest and the remarkable dance-theatre-acrobat piece The Forest Project, in which Sade Kamppila and Viivi Roiha led a shamanistic performance through a nearby forest.

But Silence Festival’s heart remained at Kaukonen’s Community Centre where, on the last night, the village band played once more. Everyone involved in these unusual four days will have private thoughts about what penetrated the Lapland silence most resonantly. But this rough-cut village band, like the river crossing, seemed to intrigue and enliven the villagers and the visitors alike – a reminder that the most important collaboration of all is the one with your neighbours.