At first it looked like all summer festivals would be lost this year, but now that restrictions are being eased, there are signs of revitalisation everywhere, and the field of culture is no exception. In the wake of a string of cancellation announcements, streaming events and live concerts for limited audiences are being prepared near and far. While this is a classic case of ‘watch this space for further developments’, what is Finland’s exceptional classical music festival summer looking like as of now?

In April, the Finnish Government declared that all public events involving more than 500 people would be prohibited up until the end of July. This dealt a huge blow to this summer’s music festivals and also forced tough decisions on the organisers of events scheduled immediately after the end of that period. The Helsinki Festival and the Turku Music Festival, which were both to have been held in August, threw in the towel in early May.

We should remember that the Government did not impose a blanket ban on all public events. As of 1 June, the limitation on the number of people allowed to congregate was raised from 10 to 50, and cultural events with more than 50 people attending are now also allowed if implemented with special arrangements in sufficiently spacious venues.

Having said that, it is refreshing to note that concerts for very limited audiences have already sprung up, for instance at G Livelab, at the Savoy Theatre, by the Finnish Baroque Orchestra and jointly by the concert series Hietsu is Happening and Klassinen Hietsu.

The quickest off the bat among classical music festivals was Meidän Festivaali [Our Festival], which published its programme on 30 May. It is hardly surprising that this famously unprejudiced chamber music festival specialising in unusual concert concepts should be able to conjure up a full-fledged festival week for the period 26 July to 1 August, comprising performances for limited audiences, outdoor concerts and live streaming. Repeating programmes for a string of ‘listener clusters’ constitutes a shared if staggered concert experience for a larger group of people.

Hietsu is Happening and Klassinen Hietsu: Kesäjamboree - the first concert with a limited audience (recording of a live stream on June 6, 2020).

Because of the current extraordinary circumstances, the theme of the festival is ‘Poikkeus’ [Exception], although the original programme planning is still lurking in the background. The theme for this year was to have been ‘Ilman’ [Without], being the contribution of the Kamus Quartet, the joint artistic directors of the festival, to the Beethoven anniversary year.

“Kamus had planned to celebrate Beethoven without actually playing any of his music,” explains the Kamus Quartet. “We wanted to explore the music without which Beethoven would not have become Beethoven, the revolutionary figure that he was. We also indulged in the tantalising thought experiment of what the world would be like without Beethoven.”

There is now one Beethoven piece on the programme, but in other respects the composer names are far from the canon; as examples, we may mention Caroline Shaw and Justinian Tamusuza.

The festival was to have included the world premiere of the VR project titled Inside the Quartet, which was in preparation through the spring. This would involve the audience wearing VR headsets allowing them to experience a performance of the Voces Intimae string quartet by Sibelius as at the seat of a Kamus Quartet member of their choice. Deploying headsets to be worn by multiple people did not seem a realistic idea for this summer, so the installation will be postponed to a later date. It may, however, prove to be an excellent way to import immersive musical experiences to care homes, for instance.

Most classical music festivals will not be happening this summer. Several of them have announced that they have managed to postpone their entire programme to next summer – the Savonlinna Opera Festival, the Naantali Music Festival and the Mänttä Music Festival among them.

But summer is not completely devoid of music. Several festivals intend to live stream their concerts, which is good news for musicians and will delight those music lovers who feel hesitant about showing up in person even at a small-scale event. Yet new information on live festival concerts is constantly coming in. 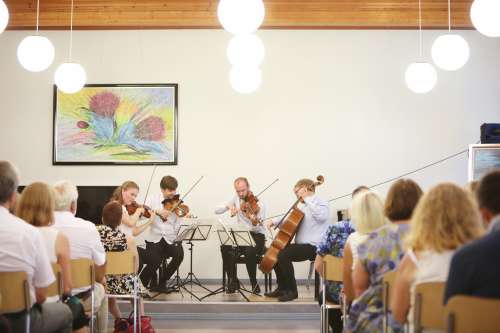 The Music by the Sea festival in Inkoo (12–14 June) will be wholly streamed, and a limited number of tickets for seats on site will be available for all concerts. The festival is exploring its titular theme, music of the sea, under its new artistic director Jan Söderblom. The Emäsalo Music Festival is also offering a handful of live concerts, including a maritime concert for leisure sailors.

The Korsholma Music Festival (28 July – 5 August) is focusing on the 1920s and on Beethoven under the banner ‘wild and free’. The concerts will be streamed, and live audiences will be admitted to some. “This is the contribution of the Korsholma Music Festival towards alleviating the impacts of the pandemic in 2020 by offering cultural experiences,” the festival website declares.

Concerts with restricted attendance may also be in the pipeline for the Suvisoittofestival of the Avanti! Chamber Orchestra. Streaming or other alternative means of implementation are being planned at least by the Helsinki Chamber Music Festival, the Kaakko Chamber Music festival and Rauma Festivo. The midday matinees of the Helsinki Organ Summer festival are going ahead, and Helsinki churches in general are offering a wealth of small-scale music events with free admission from the beginning of June.

Introducing streaming instead of completely cancelling a festival comes across as a message of hope. For many, visiting a beloved summer festival is an irreplaceable annual ritual, and being able to see familiar musicians and venues – even if remotely – may be of great value.

Some festivals are postponing some of their concerts to the autumn or to next spring (Turku Music Festival, Mikkeli Music Festival) or investing in a winter concert series (Crusell Week). Even if the future remains unclear, it is hugely important that at least some festivals show us that there is hope.

On 11 June, the Finnish government said that outdoor events with more than 500 people will be allowed in Finland as of 1 July with certain restrictions. For many festivals, though, the lifting has come too late. (See the article on Yle News)