The drama emerges from the everyday conversations of the Judge’s family but expands in the viewer’s mind – thanks in no small part to Talvitie’s powerful music, reflecting horrors in its shrieking noises, dissonances and nightmarish repetitions.

New operas just keep on coming in Finland, some with burningly current topics. Most such operas are produced by small, independent companies – this trend has yet to make its breakthrough on the major stages. It is indicative that composer Riikka Talvitie produced her terrorist-themed opera Tuomarin vaimo [The Judge’s Wife] (2014) all by herself, albeit assisted by defunensemble, which was involved in the project from the start.

Such tenacity is in itself worthy of praise – a composer producing her own opera harks back to the days of Handel. But it must also be said that in this guise – informal, austere and crammed into the tiny Balder Hall in the city centre of Helsinki – the work was much more effective than if it had been performed in an established theatrical venue. 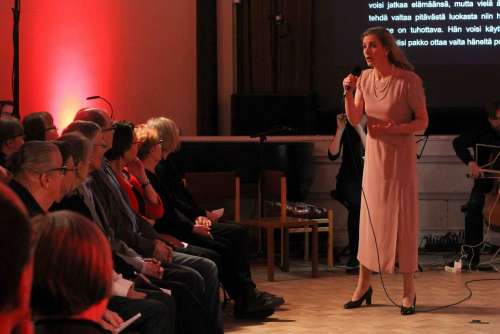 Spiced with video and spoken voice, and stage-managed to perfection, the performance was riveting and anxiety-inducing. It prompted thoughts about the causes and consequences of terrorism, about the arbitrary actions of the authorities, about politics and ideals – and about British class society.

The opera is based on the eponymous play written for TV by Caryl Churchill in 1972. At that time, it was the IRA that was bombing targets in the UK, but in this production director Teemu Mäki extends the perspective from European political terrorism of the 1970s and 1980s to today’s terrorist acts through visual references and info spots. However, in the action itself no one is blown up, and it is never made clear what the suspected terrorist is eventually convicted of. The most violent event seen is on video, showing the titular Judge murdered on his evening walk, but that is only the tip of the iceberg.

The drama emerges from the everyday conversations of the Judge’s family but expands in the viewer’s mind – thanks in no small part to Talvitie’s powerful music, reflecting horrors in its shrieking noises, dissonances and nightmarish repetitions. Through the use of electronics, Talvitie incorporates concrete sounds from actual demonstrations.

The scenes differ in character: in the dinner scene, for instance, the anxiety is relieved by irony. In a performance-art twist, Talvitie has the soloists tapping out rhythms with their feet and slapping themselves on the cheeks. The maid uses kitchen implements as percussion instruments. All this lends a wry humour to the scene. The singers are practically cheek by jowl with the audience, which reinforces the not always comfortable immediacy of the performance. 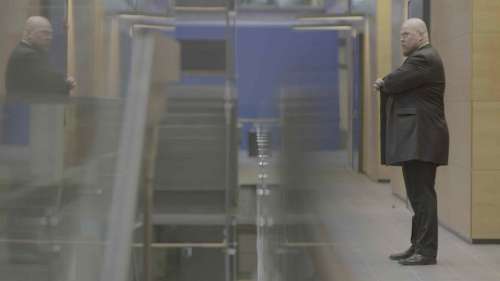 Juha Uusitalo, the Judge, in the video by Jonatan Sundström.

Juha Uusitalo was incredible as the grotesque and sadistic Judge whose booming hate speech easily associated with Neo-Nazis and their ilk. Tuuli Lindeberg, as the Wife, was a mix of conflicting emotions, loathing and defensiveness. Her bright, instrumental soprano brought out a multitude of nuances under the controlled, class-conscious shell of a British upper-class lady.

Tuula Paavola brought laconic arguments to the table with her sumptuous contralto voice, playing the part of the Wife’s Sister, and Saara Kiiveri as the Maid was seething with rage at her master, with a generous helping of class rebellion.

Jutta Seppinen conducted with determination, and defunensemble managed to conjure up colours and effects worthy of a much larger orchestra with only a few musicians and electronics.

Tuomarin vaimo is an important comment in current social discourse, and one can only hope that further performances will be forthcoming after the production run of only three performances in March in Helsinki. The size of the performing ensemble at least is no object.

The video, pictures and more information on Tuomarin vaimo here.