PREVIOUS ARTICLES FOLLOWING ARTICLES
The Kaivos festival, held at the disused copper mine in Outokumpu, brought to this unique environment a serving of musical, visual and performance art that did strange things to time – being experienced by audience members variously as a meditation, a swim in the ice or a profound experience of communing with nature.

In eastern Finland, summer called it quits almost overnight in early September, as temperatures plummeted to daily lows close to freezing within a week. Even in early afternoon, the thermometer was barely touching 10°C as I sat in the bleak concrete tower – known as the Crusher (‘Murskaamo’ in Finnish) – perched on top of the disused Outokumpu mine. Despite two extra layers of clothing, I shivered with cold as violist Mari Viluksela performed György Ligeti’s sonata. My thoughts straying to the lunch that was waiting in the cosy, warm restaurant, I felt that the music was lasting much longer than one would have thought looking at the clock.

It was no accident that I was reminded of things like time dilation, because only moments before in that same chilly space, Pekka Koskinen, Professor of Physics at the University of Jyväskylä, had talked about the concept of lightness from the perspective of physics and touched on the general theory of relativity by noting that gravity is actually a distortion of the space-time continuum: the stronger the gravity, the slower time passes.

The theme this year at the Kaivos festival, which takes its name from the disused copper mine in which it is held (Kaivos being the Finnish for ‘mine’), was the absence of weight: Keveys [Lightness]. This year’s festival on 3–5 September was the fifth of its kind, and the festival announcement was held off until the last possible moment for fear of coronavirus restrictions scuppering the event. Fortunately, the expansive industrial halls offered ample room for safe distancing.

Built during the interim peace in the Second World War, the facilities that straddle the steep hill of the mine itself, flanking the town centre, offer plenty of food for the imagination. In the dusk, Kiisuhalli [Pyrite Hall], which boasts a cathedral-length reverb, looks like a love child of the Hagia Sofia and an aircraft hangar. The concrete tower glowering on top of the hill is a suspicious panopticon. Suspension bridges and tubular walkways span the canyon, on the far side of which is a former enrichment plant dubbed Hogwarts by the local youth because of its sombre black walls. This massive, gradually crumbling structure embraced by the forest athwart a sleepy city does indeed evoke shades of the Harry Potter universe but also recalls the eerie surrealism of Twin Peaks.

“Magnificent though the performances may be, the space is a tremendous experience in and of itself,” says Väinö Jalkanen, pianist and composer, who is the artistic director of the Kaivos festival. He was a founding member of the festival together with the ÄÄNI collective, which specialises in contemporary music. Jalkanen was fascinated by Outokumpu and the old mine when he came there to witness a performance of contemporary dance in 2012.

Indeed: though Outokumpu has a population of only 6,000, it is home to a vocational qualification programme in contemporary dance, besides similar programmes in stage and performance technology, sound production and graphic design.

“This is why we have the festival in the autumn, when the students have come back to town, instead of during the summer holidays. Because there are so many young people in Outokumpu willing to explore something new and something wild, this is a unique location for this particular festival.” 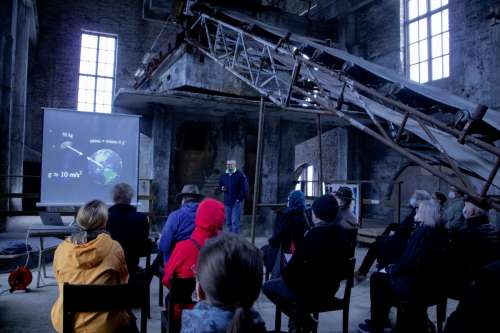 Pekka Koskinen, Professor of Physics at the University of Jyväskylä, talking about the concept of lightness from the perspective of physics.
Photo: Henri Elsinen / Outokummun kaupunki

The programme of the Kaivos festival this year focused on contemporary chamber music and rarely performed works from the second half of the 20th century. Jalkanen, who has studied composition in Italy, invited the Quartetto Maurice from Turin to perform at the Festival in addition to the ÄÄNI collective, which is the 'house band'. Their programme included works by Giacinto Scelsi, Francesca Verunelli, Daniele Bravi, Clara Iannotta and others. Spectral sounds, tonal colour and noise were explored from a variety of viewpoints in works by the aforementioned composers and also in Palais de mari by Morton Feldman and String Quartet no. 9 by Georg Friedrich Haas, the latter performed in the dark. Both works simply eliminated the listener’s sense of time.

However, the Kaivos festival does not want to be pigeon-holed as a festival for contemporary-music geeks. The programme also included science-themed lectures, works for viol from the Baroque era, silent theatre by the Vaara collective, paintings by visual artist Vilma Panula, electronic music, stage poetry and an atmospheric performance by Veera Neva on saxophone in Kiisuhalli in counterpoint with the video visuals of Arttu Nieminen. Professional dancers and dance students performed to music by Tristan Murail and Rebecca Saunders and also turned up to take the floor at the after-hours DJ gigs, which featured experimental beats by Illyana and rarities of Finnish disco music discovered through dedicated crate-digging by Arttu Seppänen.

“Some of our visitors come for the dance performances, some for the contemporary music, some for the lectures. And since all tickets are valid for several hours, there is a very low threshold for straying out of your comfort zone and having a look at something completely different,” says Jalkanen.

The programme of the Kaivos festival was gratifyingly profuse, but lightness is a relative concept. While it was theoretically possible to see and hear every performance, this carried the risk of arts overload. As the festival concluded with the shifting light displays in Anagrāni by Alireza Farhang on Sunday afternoon, one’s analytical capacity was well worn away, and the mine tunnel forming part of the museum attracted no interest any more except as a shortcut to the next event.

As it happens, the combination of an overdose of art, the cold weather and fatigue – in a word, pressure – began to act on the subject like a meditation, prompting a multitude of amateurish epistemological, ontological and metaphysical musings on the nature of space, time, deferred gratification and bodily sensations. If a work lasts for a long time, does it become heavy? If a work is heavy, does it last longer? I was also haunted by Milan Kundera’s thoughts on the restless, elusive nature of lightness and of the reality and imposition of meaning inherent in its polar opposite, heaviness.

In a sparsely populated region, there is a rare kind of space in which to breathe and to act, even as an artist. Visitors from the regions of Savo, Kainuu, Karelia and central Finland formed an essential part of the festival. In addition to embracing the local circumstances and raising the profile of cultural life outside Helsinki, Jalkanen has an even more important item on his agenda: to change the public perception of the eastern Finnish identity.

“If you ask someone what it means to be a New Yorker, they will probably think of something future-oriented, of doing new things for the first time. But the identity of North Karelia is often seen as manifested in, say, traditional foods such as Karelian pirogs,” Jalkanen explains. “I want this event to demonstrate that the future also happens in eastern Finland, that this is a place where you can have world premieres, Finnish premieres and interesting novel phenomena. People may think that this sort of thing is ‘typical’ in New York, but not many realise that people in Outokumpu can be like this just as well: bold, unprejudiced, dynamic world citizens.” 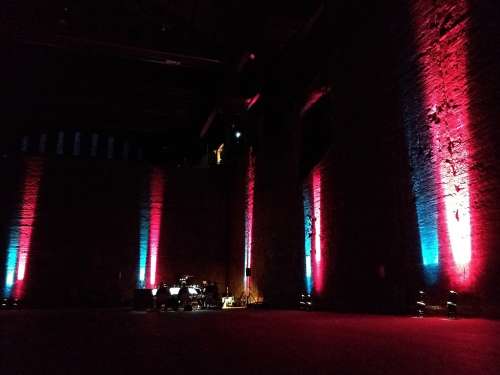