The Tampere Biennale celebrates its 30th anniversary this year. Launched in 1986 and held in April in even-numbered years, its profile is that of a domestic review of contemporary classical music, with commissioned works and premieres. It alternates with Musica nova Helsinki, which is more international in content and is held in odd-numbered years.

This year, the programme is quite exceptional. There has never been so much crossing of borders and deliberate mashing up of genres at the Tampere Biennale as now. Artistic director Sami Klemola has put together a package where music deftly sidesteps into other branches of the arts and brings back influences, not to speak of juxtaposing, say, experimental rock and conventional concert music. The Tampere Biennale is not just a music festival, it is a diverse and layered showcase of today’s culture to a much greater extent than is usual for Finnish contemporary music festivals.

This spring’s Biennale is here and now. Reminiscing about past decades is so, well, last century.

“I selected two pieces from the 1980s for the Tampere Philharmonic. The concerto Visions and Whispers by Usko Meriläinen, premiered by Mikael Helasvuo, is of particular relevance for the festival: it was premiered at the first Biennale and will now be heard again.”

The largest individual piece on the programme at the Biennale is the brassy and massive Aiolos, a 90-minute monolith of a concerto by Paavo Heininen for organ and symphonic band. The rest of the programme is a patchwork of recitals by chamber ensembles and soloists, improvisation, club nights and sound events all around the city.

Alternative with a vengeance

Finnish modernist-academic contemporary music is alive and very well, but the programme of the Biennale serves to remind concert-goers that alongside the piece-orientated and handicraft-orientated culture of classical music there is a wealth of different approaches to sound and musical material. These worlds do not necessarily collide in Finland as strongly as they have been doing in the rest of Europe for years.

“I find it interesting that so many relatively similar things are being done in different genres. Yet appreciation tends not to cross genre boundaries. I do not know why that is,” says Klemola. It is his desire that fans of particular genres would find their way to concerts and events of different genres.

In the more popular genres, experiments rarely if ever begin life as the work of a single person sitting at a desk. Composer Jarkko Hartikainen, one of the composers whose pieces are being premiered at the Biennale, is very much aware of this dichotomy. He is a postgraduate composition student at the Sibelius Academy, and there have been seminar discussions there about sound installations and sound art. “Sound art is usually seen as an extension of the visual arts. It is rarely composed, in the sense of consisting of a logical and controlled processing of musical ideas.”

Sound art is a relative newcomer in the field of Finnish contemporary music, but there are already a number of creators of sound installations in Finland. Composer Ville Raasakka works with materials ranging from concrete sounds to microtones. In his sound installation Asphalt and algae, he combines a commentary from a Monster Truck race with the sounds of the sea floor.

There are no fewer than 12 sound art exhibitions at the Biennale. Some consist of surprising sound sources embedded into the city itself, while others are conventional sound art works combined with visual impulses and characters. One of the most inventive works is the kinetic sound installation Bits and Bytes by Finnish-German artist Marko Timlin: it is scored, if one can use that word, for 104 floppy disk drives whose frequencies can be modified in real time.

Concerto planos is a joint production by a new circus company and contemporary musicians, and as such in a class by itself at the Biennale. Finnish new circus occupies a respected position at the international cutting edge, up there with France, Canada and Australia. Circo Aereo is one of the uncompromising companies of this newish art form. The production created by Circo Aereo and defunensemble for the Tampere Biennale is a first in Finland: the first live performance where new circus meets contemporary music.

And we do mean meet, because it is not only acrobats Mika Kaski and Sade Kamppila who manage the stage action: the musicians of defunensemble and bass clarinettist Tapani Rinne also participate. “We decided at the outset that the musicians would also perform on stage,” say Tapani Rinne, who designs the music and the shape of the performance, and Tuomas Norvio, the sound wizard.

Rinne and Norvio have robust experience of the variable nature of performances in circus and dance. For defunensemble, this is a new area, as they have never before worked with a circus company. Lights and the placement of performing areas all around the space are also important elements in Concerto planos.

A meeting of the margins of margins

“The music and sound have a strong improvisational character, and the music is by no means through-composed,” Klemola points out. The music both supports and reinforces the action on the stage, but there are also independent musical sections. The scenes have illustrative working titles such as Jumping rope swing, Light swing duo and Worm walk. “In the scene titled Mika eyes shut, Mika walks on his hands on a tiny platform, blindfolded. We create a stuttering sort of sound to mimic his movement. Hanging by the hair is a powerful number by Sade; she quite literally hangs from the ceiling by her hair. We will build a massive white noise piece for that,” says Rinne.

The musicians are required to do things well beyond the call of duty. Flautist Hanna Kinnunen is in a tight spot: “Hanna has a solo during which she is suspended from the ceiling in a harness. She also has a scene with Mika involving quite hard physical contact on stage.” The production also features a self-made instrument consisting of piano strings fixed to a large metal frame. This contraption is electronically amplified and played by Emil Holmström.

Tuomas Norvio summarises the process: “This encounter between circus and contemporary music has a very special palette of emotions.” Rinne concurs. “It is quite amazing how naturally all these elements work together,” he says. “This seems to be a meeting of the margins of margins. It’s great fun.”

Concerto planos will also be performed at the CIRKO Festival in Helsinki on 12 and 13 May 2016. 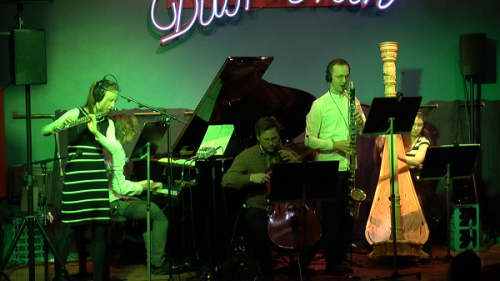 Tips for the Tampere Biennale by composers and musicians

Musical happening controlled on a PlayStation, game aesthetics, a solid overall concept. “This is so 21st century.”

“My colleagues in Berlin told me about this wonderful artist named Islaja that you have.” Fonal Records has been a nexus of alternative and experimental popular music genres for 20 years, and it has not gone unnoticed internationally.

“A solo violin recital is a rare thing. Maria Puusaari is one of the best performers of this repertoire in Finland.” The programme includes two world premieres.

“Originally written as the score for a silent film, Wennäkoski’s piece was very impressive in the original context.” “Auvinen was already writing punk in his previous orchestral piece. The concert is sure to be high energy.”

“Vainio’s music and the sound design are brilliant!”