PREVIOUS ARTICLES FOLLOWING ARTICLES
Finland’s latest star conductor, Klaus Mäkelä, has caused a bit of a stir with his Decca label debut - a full cycle of Sibelius Symphonies, no less. But what part of the success is calculated studio work and what is an exceptional flow of music that can also be achieved in concert? To find out, we can compare the studio recording to a recent live experience at Hamburg Elbphilharmonie.

In early 2021, public life in Norway was completely shut down. The Oslo Philharmonic and its chief conductor, Klaus Mäkelä, took advantage of the situation. They used the blank space in the schedule to take their time and dig deep into the music of Jean Sibelius, with a luxury of diligence that would hardly have been possible during a regular season.

The results of their work are presented in two ways: a Decca recording of the whole cycle of Sibelius Symphonies – and a tour of central Europe, showcasing the Sibelius cycle in Paris, Vienna, London and Hamburg.

Both approaches have been enthusiastically received. The concerts in Hamburg were nothing less than a sensation. In their interpretations, Mäkelä and the Oslo Philharmonic found exactly the right balance between clarity and emotion, between the overwhelming power of Sibelius’ severity and the intimate moments of his symphonies.

The abundance of detail, the wide range of dynamics and colour and the gripping expressiveness were general trademarks of the alliance. Since Mäkelä became chief conductor in Oslo in 2020, he and the orchestra have developed an intense, reliable partnership, the subtle rubato playing being the sign of an enormous flexibility, based on a profound knowledge of the music.

Conductor and orchestra clearly trust each other. That’s why they can fly together – as in the famous “Swan” theme at the end of Sibelius’ 5th Symphony, which delivered one of many goosebump moments in the live cycle.

Although the main ideas and the framework of the symphonies remain very much alike in the studio production and on stage, there were still some modifications and new elements in the live performance. The most obvious change was caused by the different shape and characteristics of the venues. Whereas the recording from the Konserthus in Oslo often provides a rather massive sound of the orchestra - despite the fact that the musicians had to sit 1.5 meters apart from each other at the time - the Elbphilharmonie in Hamburg represented an opposite ideal.

Designed by the same acoustician as the Helsinki Music Centre, Yasuhisa Toyota, the hall has an almost studio-like transparency which of course affects the mixture and balance of the instruments. The timpani, for example, sounded more distinct, more soloistic than on the recording, especially in the final culmination of the 7th Symphony. Very interesting also is the big crescendo of the 1st Symphony, which arrives with a bright beam in the recording, led by the trumpet. In the Elbphilharmonie, Mäkelä grounded this moment with more substance in the low registers of the brass section. 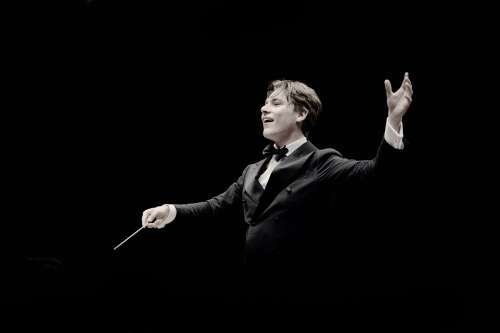 To my ears, the most striking difference regarded the pacing. Inspired by the slender acoustics in the Elbphilharmonie, Mäkelä conducted some movements and passages in a slightly more fluid tempo. He approached some accelerandos and climaxes with even more speed than in the recording, ear-catching particularly in the romantic heat of the first two symphonies.

Here, Mäkelä revealed an expressive power that might be called juvenile – but it was never too much. He knew exactly how to channel the amount of energy that the music and his orchestra needs. There were always moments when he stepped back and reduced his movements, as in the 6th Symphony, where he created the spirit of neoclassical lightness with small gestures.

But then he was always able to flip the switch immediately. Be it in the tender woodwind melody of the 3rd, where his hands formed the soft rocking character without the baton. Or in the 4th Symphony, where Mäkelä’s whole appearance showed all the weight and gravity of the music. He and his fantastic team from Oslo dived into the dark depths of the piece and bestowed the audience with an enthralling interpretation – as one highlight of an unforgettable musical encounter with Sibelius.