The recent immigration wave into Europe has proved that where there is no common language, music and art can provide an important communication avenue between immigrants and locals. Through art, immigrants are able to express their own culture but also to give a voice even to their most harrowing experiences. Likewise, music played a pivotal role for Finnish immigrants in America in the turn of the 20th century. It enabled them to maintain their Finnish identity in the new environment and to integrate into American society.

North America attracted more than 350,000 Finnish migrants between the mid-1860s and the late 1920s. Conditions driving migration included continuous crop failures, population growth in rural areas as well as political reasons. On the other hand, curiosity and a sense of adventure tempted young people to try their luck on the other side of the Atlantic. The majority of immigrants were unmarried young men who came from a working-class background and who were between 15 and 25 years of age.

Due to their working-class background, Finns were open towards the labour movement from the very start. This had a direct and significant impact on the development of the immigrants’ music culture as a big part of local music activities were centred around labour unions.

Music provided an important way of socialising for immigrants. It was present at all occasions, from meetings to summer festivals and speaking tours. On a local level, the cornerstone of music activity was provided by brass bands and choirs, which everyone was welcome to join. Apart from creating a strong sense of community, music served as an ideological tool which was used for many kinds of ideological and educational purposes, such as recruiting new members, spreading the political agenda and trying to reduce alcohol use.

The most important music performance venues were the Finnish American halls, which were at the heart of the Finnish immigrant communities’ busy cultural scene. Halls were custom-built or rented to serve every Finnish community. They were mainly used for dances, evening socials and concerts by local music groups or touring musicians. Dancing was by far the most popular form of entertainment for the immigrants, providing an easy way to form social contacts.

In addition to providing a place for social gatherings, Finnish American halls formed an important network of performance venues for individual artists and groups. Musicians who performed at the halls were most often either Finnish musicians who had migrated and made their career in North America, or visiting professional musicians from Finland. These performers would travel from one Finnish community to another, often playing Finnish music. 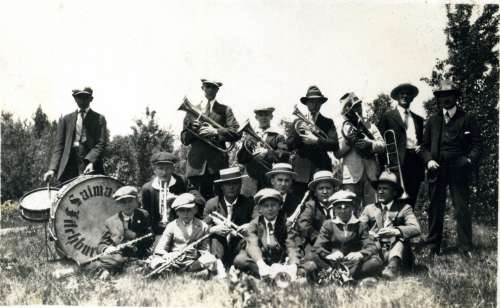 Integration and the IWW

Especially in the early days of migration, Finnish immigrants preferred music programs with strong Finnish influences  – including working-class audiences. In time, immigrants’ musical tastes became influenced by their new environment. This subsequently allowed Finns to expand their networks outside of their own community.

These changes were first seen in the brass band scene. With their repertoire mostly based on instrumental tunes, bands were better suited to ethnic blending, compared to choirs who had to overcome a language barrier in order to open up their activities. Band membership in mining communities and industrial cities would often include multiple nationalities. At the same time, band repertoire began to grow more varied.

The general patriotic ethos within the labour movement, which helped sustain Finnish identity, was significantly weakened by the 1910s, when poor working conditions drove increasing numbers of Finns to turn to the radical Industrial Workers of the World (IWW). In the 1920s, Finns formed the largest individual ethnic group within the organisation. The IWW’s catch phrases were direct action, sabotage and general strike. Music was the organisation’s most important operational tool in the battle against capitalism. Its central role is aptly represented in the IWW’s moniker “The Singing Union”.

The movement’s songs highlighted radicalism, bloodshed, solidarity, anti-war and anti-religious sentiments, the Red Flag and the power of community in improving the conditions for the working class. Some songs amongst the Finnish Wobblies, as the Finnish union members were called, also depicted the horrors of the Finnish Civil War (1918).

In line with the organisation’s aims, the IWW songs emphasised the demand for equality, calling for an equal standing for women and men as well as for ethnic minorities. This explains why many Finnish immigrant women emerged as prominent activists within the movement. They formed their own associations, wrote songs and participated in demonstrations.

The most famous IWW song about the battle of women is titled Rebel Girl. It was written by Joe Hill, the movement’s most significant songwriter, and it has been translated into Finnish as well. Whilst imprisoned, Hill wrote the song for his friend Elizabeth Gurley Flynn, role model for Finnish women activists. The song pertinently reflects the important role of women in the movement:

That’s the Rebel Girl, the Rebel Girl!
To the working class, she’s a precious pearl.
She brings courage, pride and joy
To the fighting Rebel Boy.
We’ve had girls before, but we need some more
In the Industrial Workers of the World,
For it’s great to fight for freedom
With a Rebel Girl.

True to its ideals of equality, the IWW accepted members from every profession and trade. I conclude my article with a verse from a rarely-heard and tragic song as an example of the destiny many immigrant women had to face. Langenneen laulu (Song of the fallen one), by an anonymous writer, is found in the book titled Palkkaorjain lauluja (Songs of the wage slaves) which was published by the Finnish Wobblies in 1925:

I am led like a lamb to the slaughter,
With no escape from the cruel death.
I am shunned by the "chaste" ones,
Who have trodden me down to the mud.

The song is likely to be the only published Finnish-language song which defends sex workers and their rights.