Olli Kortekangas excels at sensitive ensemble writing in his opera My Brother’s Keeper about the Finnish Civil War, but the work is hamstrung by its amateurish libretto.

Composer Olli Kortekangas is a consummate professional with an extensive career. A notable percentage of his output consists of vocal music, most prominently the near dozen of operas he has written. These vary from youthful radiophonic works to full-fledged, full-length music dramas.

My Brother’s Keeper, premiered at Tampere Hall in Tampere in February, is one of the latter, and as such its production represents a significant investment for all parties concerned – the composer, the librettist and the producers, the Tampere Opera. The subject is an important one, as after the celebrations of the centenary of Finland’s independence last year it is appropriate to turn our attention to one of the darkest times in our history, the Civil War. The composer reports that he had been working on this project for a decade or so.

So this is an opera about the Finnish Civil War, the conflict between the Reds and the Whites whose last battles were fought in Tampere 100 years ago. The story in the opera is one of a family in turmoil: a pacifist father, Johannes, and his two children who end up on opposite sides of the front. Daughter Amanda joins the Reds, while son Eemil sides with the Whites. The network of relationships is further tangled when Amanda’s husband, Iisakki, announces that he is in love with another woman. This other woman is Serafiina, a Red soldier, who is pregnant with his child; but Amanda and Serafiina do not know each other or their roles in this love triangle, and they become friends. In the final stretch of the battles, Eemil ends up shooting his father, and his mind shatters. Serafiina is killed by the Whites, but not before bearing a healthy child. The war ends, and Amanda takes charge of her husband’s child and of her brother. 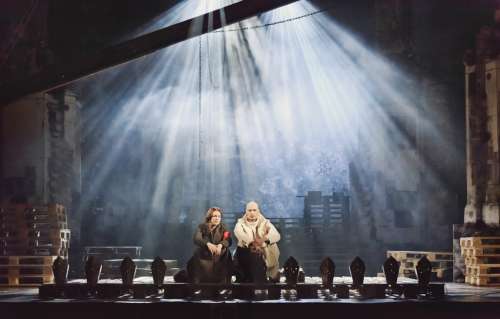 The premise in My Brother’s Keeper is sound enough, but the stakes are also high. It is therefore all the more frustrating that right out of the gate the opera stumbles because of an element which one does not even notice when it works but which is painfully obvious when it does not: the libretto, the fundamental structural element in a music drama. (See also the column by Maritza Núñez.)

Opera librettos are a challenging genre unto themselves, with peculiar rules of their own. A libretto is not the same thing as a spoken drama or play, even if there are some exceptions to this in 20th-century opera; these are known as "literary operas" (Literaturoper).

An opera libretto must have a core idea that is crystal-clear so as to allow itself to be depicted through the multimedia means of music theatre. A libretto must also be dramaturgically solid, including nothing but the essential. It must further be sufficiently sparse in its writing so that it leaves the music room to breathe. And since the amount of text must be limited, it must be symbolically strong and consistent.

Sadly, Tuomas Parkkinen, the librettist and director of My Brother’s Keeper, does not quite achieve this.

Opera librettos are a challenging genre unto themselves, with peculiar rules of their own.

Even in reading through the libretto it was obvious that there is too much text. The density of the text is problematic in relationship to the music, as the rapid-fire dialogue prevents Kortekangas from unleashing his creative energies and traps the music between the words, so to speak. However, at times the composer does get a chance to get his own voice heard, and the vocal ensembles in this opera are particularly pleasing to the ear. This is Kortekangas’s strong suit in general, and these ensembles are the finest moments in the opera. Kortekangas also skilfully employs references to other styles of music, such as workers’ songs.

There was plenty of discussion in advance about forgiveness and clemency, themes that the opera was expected to highlight. In the event, I for one struggled to discover those themes in the opera. Perhaps they were overrun by all the shootings, executions and apparently aimlessly rushing crowds.

Which brings me to the issue of the choral scenes and the directing, for which, as noted above, Tuomas Parkkinen was also responsible. Because the people as a community are of great importance in this opera, there are many choral scenes. There is nothing unusual about this, as crowd scenes were a staple of French revolutionary operas at the turn of the 19th century and of grand opera later on. But there is too much chorus in My Brother’s Keeper, or at least there are too many people on stage. The stage looks overcrowded for much of the time, and the audience is given very little respite from the constant fast-paced delivery of information. Less is more, particularly in opera where several art forms amalgamate. 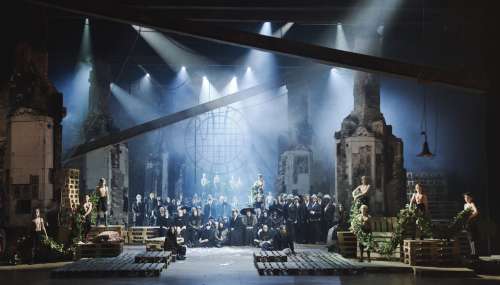 A crowd scene from the opera My brother's keeper. Photo: Petri Nuutinen.

The singing, however, is excellent and the casting appropriate. Baritone Juha Kotilainen, as the father, has a handsome voice and electrifies the scene whenever he enters. Soprano Tuuli Takala, as Amanda who joins the Reds, is captivating: her voice is pure, expressive and technically fully under control. She could easily pursue an international career if she so chose. Baritone Ville Rusanen is also in command of his instrument and is an excellent fit for the role of Eemil, the uncompromising White soldier. Mezzosoprano Erica Back, a recent graduate of the Department of Opera at the Sibelius Academy, makes a promising outing as the Red soldier Serafiina. Iisakki is brilliantly performed by tenor Tuomas Katajala. Baritone Tuomas Pursio was unfortunately unable to appear on the first night because of illness and was substituted as the Unknown Soldier by Kristjan Möisnik.

A few character roles are included in the cast. Päivi Nikula was at home in her role as the Housekeeper vacillating between social classes. The agitator, Hanna Waltz, performed by Virpi Räisänen, is a high coloratura role that momentarily transported the story into the realm of magical realism. We might imagine this role to have been modelled on the corrupt Chief of Police Gepopo who dominates the Surrealist utopia in Le Grand Macabre (1978) by György Ligeti (1923–2006). Suvi Väyrynen appeared as the young Onni Kontio. The opera was conducted in exemplary fashion by Santtu-Matias Rouvali.

The vocal ensembles in this opera are particularly pleasing to the ear. This is Kortekangas’s strong suit in general.

Opera librettos are still not regarded as an independent art form and literary genre in their own right in Finland, and this is an obstacle to the development of opera. Our composers are competent enough, but because they often find themselves working with ham-fisted librettos, their works rarely stand out from the crowd. Considering what a strong opera boom there is going on in Finland, we really need more professionally competent librettists. This, in turn, requires training that as of yet is not available in this country.

One of the most prominent Finnish librettist working today, Michael Baran, was involved in creating Olli Kortekangas’s operas Daddy’s Girl (2007) and One Night Stand (2011) – and one may hope that he will again be involved in the composer’s next opera. The Savonlinna Opera Festival, to its credit, is aware of the libretto problem and organised an opera libretto competition in 2016. The winner was Laura Voipio with Regine.

My Brother’s Keeper sparked a Facebook discussion among professionals with various viewpoints to opera about the importance of the libretto and what an opera libretto should be like. Although the libretto of My Brother’s Keeper was an opinion divider, there was general agreement that more attention needs to be paid to the quality of the texts to be set in operas in the future. One may hope that this translates into something concrete. For my part, I will ensure that the matter will be considered seriously at my current workplace, the University of the Arts Helsinki, for instance by offering training in the writing of librettos.