The wooden architecture of the new Sibelius Hall in Lahti provided both traditional and modern support to the Lahti Symphony’s performance of Sibelius’ Finlandia at the hall’s debut on March 9th [2000].The hall’s intriguing combination of proven and new should also help efforts to export Finnish wood-construction expertise and design. Externally, the hall was almost completed in time for the inaugural concert, but it will still take months to “tune” the acoustics. The New York firm Artec and its acoustics team want to polish the hall's timbre to its utmost.

People speak of things being “at the right time and place” when they fall into place as if by themselves or when they begin to roll in the right direction as if driven by secret forces of nature. The story of the Sibelius Hall goes back a long way, but not until spring 1996 did a veritable accumulation of coincidences create the critical mass necessary for a reaction to start.

Many years of successful cooperation with the BIS label had led the Lahti Symphony deeper and deeper into the world of Sibelius’ music. The orchestra specialises in premiere recordings, and that spring it was the turn of the Wood Nymph, an unknown work whose publication roused interest in music circles worldwide.

The subject also caught the attention of the information manager of the company Metsäliitto, Pekka Kivelä. He contacted the orchestra’s manager, Tuomas Kinberg, and the orchestra ended up being sponsored by one of the largest Finnish paper companies.

Around that time, Tuomas Kinberg was discussing the making of a documentary on the orchestra with the video producer Pekka Krook. When Kinberg told about his concert hall concerns, Krook hit upon the idea of combining the ongoing national “Year of Wood” with the plans for a new hall. The idea of a wooden concert hall immediately electrified the orchestra’s manager, and now it was his turn to contact Metsäliitto’s Pekka Kivelä. The latter realized the importance of the idea and promised to sponsor the project.

Due to Kivelä’s connections, the Lahti Symphony was able to present the idea of a wooden concert hall to the top echelon of the whole Finnish forest products industry. This in turn made it possible to present the project to the Finnish government and to the president of the “Year of Wood,” prime minister Paavo Lipponen. The important thing was to get the Finnish State to support the project.

During the summer of 1996, the Lahti Symphony and Metsäliitto engaged in efficient teamwork, and contacts were established with all government ministries that were in the least concerned. In the fall, newspapers reported that the government and the forest industry had granted 40 and 10 million Finnish marks respectively in support of the hall project. This contribution was crucial, for it covered almost half of the construction costs.

The biggest problems were however still ahead. The city of Lahti had suffered from the recession throughout the 1980s, and it proved to be extremely difficult to persuade the city council of the need for this project. The international architectural contest had already managed to be completed in the spring of 1998 before the city council finally decided to take a stand for the project. In the decisive, sixth (!) vote on May 10th, 1998, the vote was 30 to 29.

The decision represented the kickoff for the most notable project of the “Year of Wood” and “Age of Wood.” The prize-winning design of the architectural design firm Artto Kaijansinkko Palo Rossi Tikka OY was to be carried out after all. 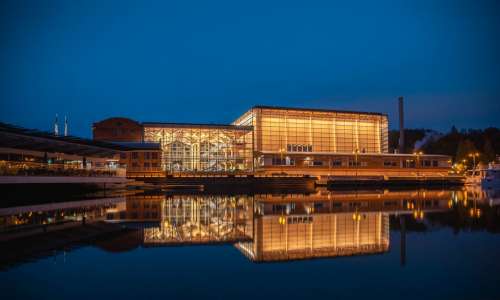 The Sibelius Hall from outside.
Photo: Ilkka Siitari / KOKO Lahti

Of central importance in the project has been the US firm Artec Consultants Inc., which is responsible for the acoustic design. Known as the creator of acclaimed halls in Birmingham and Lucerne, Artec’s Russell Johnson was a name in which conductor Osmo Vänskä put rock-solid trust. “The goal in Lahti was a top-level concert hall. The builders were chosen accordingly,” was Vänskä’s explanation when asked during the opening ceremonies why Finnish acoustics experts were passed over.

An expert in his field, Johnson can be compared to a master maker of string instruments. The basic solutions of his halls remain the same, for example the acoustic canopy whose different parts can be adjusted according to the needs of the ensemble or the music itself.

To a certain degree, “tuning” the hall means the precise adjustment of the different parts of this canopy. However, there are other aspects too: The audience’s entrance passageways constitute huge, high resonance chambers, whose inner surfaces are covered with adjustable, heavy control curtains. With their help, one can influence the hall’s resonance, among other things.

While the hall is being fine-tuned, the musicians are working in their new changing environment – listening, experimenting, and giving feedback. The acoustics experts have emphasized that the orchestra itself has to learn to play on its new instrument, the Sibelius Hall.

Although nearly half of the city council opposed investing in the Sibelius Hall, the public seems to be strongly in favour. All the spring concerts are sold out in a hall seating 1 250 when the choir balcony is also open to the public. The auditorium itself has 1 100 seats.

For the orchestra, the completion of the hall has meant an immediate doubling of listeners. Especially season tickets have been sold in record numbers, showing that the interest constitutes more than first excitement.

Lahti Symphony’s strategy is based on learning, which enables achievement of the goals set by the “team,” The possibilities for learning had been exhausted in the old concert hall. The Sibelius Hall creates a new foundation, a good platform for development in the 21st century.

The BIS recordings are the source of the orchestra’s international reputation. They were so far all made in Lahti’s Church of the Cross (Ristinkirkko), which producer Robert von Bahr considers one of his best recording halls. The new hall was tried out for recording already in the beginning of April 2000 when the orchestra recorded Erkki Melartin’s rarely heard opera Aino. The conductor was Ulf Söderblom, who had been the orchestra’s principal conductor 1985–1988, i.e. during the period in which the orchestra is considered to have begun its dramatic development.

This article was first published in FMQ 2/2000 and is now (June 2021) republished online with the kind permission of the author.