PREVIOUS ARTICLES FOLLOWING ARTICLES
Elina Mustonen, one of Finland’s most prominent harpsichord players, has recently appeared on stage in the UK – but as an actress, in performances combining music and theatre. Where did she find the drive to extend her career to acting, and what was the result?

“It’s a challenge to ski as fast as you can and then calm yourself down so that you can shoot accurately.” Musician and actress Elina Mustonen references the Nordic biathlon to illustrate her dual profession. In April, she appeared – as a musician and actress – in her solo production Her Infinite Variety – Women of Shakespeare in Word and Music in Cambridge in the UK. The production was written and staged by Johanna Freundlich, Nely Keinänen and Mustonen herself.

“It was well received,” says Mustonen with pleasure. “No one there had ever seen a performance quite like this.”

Music and drama have always been Elina Mustonen’s two passions. She pursued both in her youth, but theatre fell by the wayside once she chose music as a career. Her parents had heard a clavichord at a concert and ordered a spinet – a small harpsichord – from Germany when Elina was three years old. She graduated from the Sibelius Academy with the harpsichord as her main instrument, but the first major milestone in her career came when she went to study with Ton Koopman in Amsterdam.

“It was like learning to walk all over again. I was completely blocked and didn’t have the physical means to deal with it. With Koopman, we began with me learning to be conscious of whether my wrist was relaxed. It was excruciating but necessary. I almost wept at my first lesson, because I knew that I’d come to the right place.”

Music sounds the best when you can get out of its way, as Mustonen describes it. If your body is tense, that can be heard in the music. But the sound of a harpsichord is produced by a quill plucking a string. Pressing a key either produces a tone or it doesn’t. So does it make any difference how you touch the key? Mustonen says it does. The touch can be in an up-down direction, or it can ‘send out’ the sound with a follow-through motion. Harpsichord playing is a bit like Japanese calligraphy in this sense: it is the touch that leaves a mark on the paper, but the movement exists both before and after that touch.

Mustonen had a long and successful career under her belt as a musician and teacher in Finland and abroad when she decided to explore drama again. Her interest had been rekindled by opera productions where she played the harpsichord and also did a bit of acting.

“But would I ever dare open my mouth on stage?” Mustonen exclaims.

Ultimately, her passion proved stronger than her misgivings, and she applied for a two-year drama course at an adult education centre, at the bright young age of fifty.

“I felt I had to. Then, at least, I’d have no regrets. My husband said that he’s never seen me as happy as whenever I came home from drama school,” says Mustonen with amusement.

Mustonen subsequently studied drama at RADA, the Royal Academy of Dramatic Art in London. The programme was highly diverse, ranging from text analysis and voice production to masks, clowning and fencing. The focus was on how all of this supports the moment when the actor is on stage performing something like Pinter, Ibsen, Chekhov or Shakespeare. Mustonen’s teachers at RADA noted that her musicianship was apparent in her acting – she had brought a “musician’s scalpel” with her in her toolkit, meaning the ability to prepare well, the ability to implement changes quickly thanks to a routine of precision in rehearsing and repetition, and experience with chamber music that facilitated awareness of the ensemble and how to respond to her fellow actors.

Music also has a bearing on how Mustonen analyses texts by the playwright that is the closest to her heart, William Shakespeare. Metre and rhythm are important in his work, which is why Mustonen reads his texts as if they were a musical score, considering aspects of melody, counterpoint and polyphony. Shakespeare always has many dimensions and layers, further enhancing the kinship with music. Moreover, Shakespeare dates from the same era as the early music frequently performed on the harpsichord. 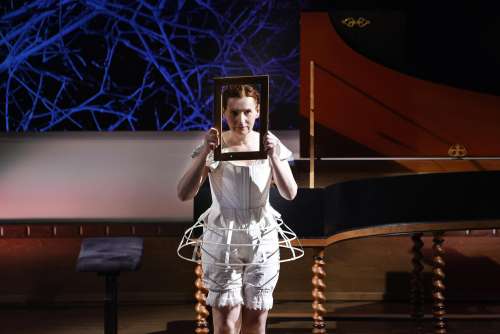 “All the world’s a stage”

Considering all this, it was only natural that Mustonen should embark on her musical theatre career in 2016, the Shakespeare anniversary year. Her Infinite Variety combines texts by Shakespeare with contemporary music for the virginal (another type of harpsichord). Mustonen has performed it frequently in Finland and has now successfully exported it to Shakespeare’s native land as well. This production was followed by JOUEZ! – On the Road with Molière, which breezes through the complete works of Molière in one hour, accompanied by gems of harpsichord music from the French Baroque.

After that comedy, Mustonen completed the musical drama Laura Maddalena, which tells the story of two girls at a Venetian orphanage in the 17th and 18th centuries, combining fact and fiction and also combining Venetian harpsichord music with new compositions by Eero Hämeenniemi. She is currently working on a solo production featuring actress Olga Knipper, the wife of author Anton Chekhov. The music for this production will be provided by Elina’s brother, pianist and composer Olli Mustonen.

What Mustonen finds particularly inspiring is the era in which Shakespeare lived and the conflicts inherent in that era: on the one hand, we have the education, appreciation of culture, patronage of the arts and sensibilities of taste of the upper classes; but on the other hand, we have cruelty and torture legalised by society, the death penalty and bear-baiting outside theatres. In 2024, Mustonen plans to put on a solo production featuring Queen Elizabeth I, to be written by Nely Keinänen and directed by Laura Jäntti. In a new departure, Mustonen will be playing Duke Ferdinand in a production of Shakespeare’s As You Like It in England in August 2022. In period-accurate fashion, there will only be 60 hours of rehearsal.

Looking at the number and calibre of performances Mustonen has undertaken, it is clear that any blocks she might have suffered from in her creativity and artistic expression are long gone. Having once dared open her mouth on stage, she has dared do it in English as well, and she has also had the breath-taking audacity to export her performances of Shakespeare to England and, last year, to the United Solo festival on Broadway. This requires preparation and courage, and an open mind prepared to encounter challenges and failures too, taking the rough with the smooth – which is part of the essence of all performing arts.

Mustonen describes performing as a combination of control and recklessness. The purpose of rehearsing is to gain tools, to explore extremes and to remove blocks in one’s expressive capacity. The feeling of spontaneity resting on top of a huge foundation of preparation is an exhilarating one: something unexpected happens and you seize the moment, leading to a ‘flow’ experience that the audience can sense. The words and music are created in the moment. Or, as they said at RADA, “you have to be on the line”.

“One time I was on this technique course where we were doing a basic exercise in pairs. The idea was to explore the boundaries of how to behave and how to abandon restraint. The teacher said we were too polite. Finally I started swearing in Finnish when my English vocabulary failed me. Everyone was amused, but my partner was frightened of me. It was like unleashing a beast. Eventually everything went well with my partner too, and the others asked me to teach them Finnish swearwords,” says Mustonen and laughs.

An actor’s instrument is the actor himself. Actors have to expose their personality to a far greater degree than musicians do, and they also have a more direct contact with the audience. On stage, one can do anything and everything that one would not or could not otherwise do. Acting has given Mustonen courage, and it has been a liberating influence on her as a performing musician as well. “When I am on stage and acting, I am braver than I am anywhere else. In some ways, the stage is the safest place in the world.”

The Shakespeare quotes at headings: