PREVIOUS ARTICLES FOLLOWING ARTICLES
Hietsu is Happening! runs on the logic of improvisation, while Helsinki Seriös has ambitions to become a new cornerstone of the chamber music scene. Both are examples of how non-institutional concert organisers can foster continuity. There is plenty of demand for small-format concerts out there, even if bringing marginal music offerings and audiences together is tedious and time-consuming.

Hietsun Paviljonki in Helsinki is a venue showcasing how to introduce and establish a new kind of chamber music culture in Finland: with an inspiring location and a series of concerts. The building began life as a recreation pavilion with changing rooms for the adjacent beach and was renovated as a venue with studios and an event space in 2015. In the following spring, two music event series were established: Klassinen Hietsu and the more eclectic Hietsu is Happening! with a mix of arts and styles. In 2021, both concert series were awarded the State Prize for Music.

It all began when musicians who had happened to book studio space at Hietsun Paviljonki quickly realised the potential of the larger space in the building for performing acoustic music.

“We are interested in many kinds of music, and we also live in this neighbourhood, so it was only natural to start a local event,” says Mikko Innanen, one of the organisers of the Hietsu is Happening! series. His background is in jazz, as is the case also with his long-time friend Antti Lötjönen. At Hietsun Paviljonki, they met classical guitarist Petri Kumela, and from a meeting of minds the trio quickly evolved into an eminently energetic concert-organising team that began to set up happenings.

“We boldly adopted the ‘happening’ rubric from the very first. It encourages us to venture beyond our comfort zones and to include multiple aspects of human life into the events we organise,” Innanen explains.

“It was fortuitous that the three of us got on like a house on fire,” adds Kumela. “We are all practical people who like to get things done. It’s never been about safe decisions!” Kumela notes that it is particularly useful that because the organisers come from different backgrounds, their respective networks cover a broad swathe of the music scene in Finland. 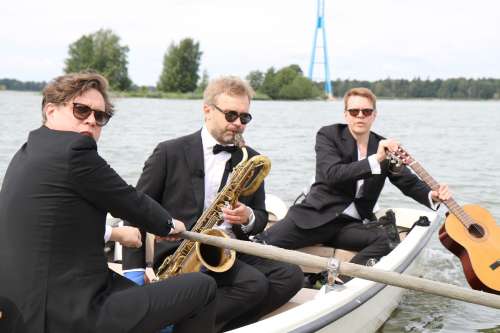 Unique locations have provided inspiration for a number of other well-established chamber music concert series in the Helsinki Metropolitan Area. The Aino Ackté Chamber Music Festival was launched at the historic villa once inhabited by opera singer Aino Ackté. The famously Functionalist cinema Kino Tapiola is home to the Kino Soi! chamber music club. Pianist Emil Holmström, meanwhile, designed his concert series Bösendörfer 1882 around its namesake, a characterful and restored vintage grand piano.

Now that one of Helsinki’s tradition-laden venues for chamber music, the concert hall at the R building of the Sibelius Academy, has emerged from its renovation, it is to be occupied by a new monthly concert series, Helsinki Seriös, as of autumn 2022. The purpose of this series is to resolve the perennial issues of the freelance field – funding and organisation – by establishing a broad base from the get-go: numerous musicians and experienced event organisers are involved, and funding was sought and acquired for the first three years of operation.

“I worked with Kamus in the Beethoven anniversary year and noted their concern that young chamber ensembles are not entering the field, or if they do, they soon quit,” says Minna Lindgren, explaining the origins of the project. Jukka Untamala, who plays violin in the quartet, had already worked out a model for how they would like to see the chamber music scene operating: round the year and in a synergetic and sustainable manner. Top Finnish chamber music performers who tour the festivals in the summer should be able to perform in Helsinki in the winter concert season, with repeats of the concerts in other locations. Similarly, international musicians performing in Helsinki during the concert season should be provided with opportunities to perform elsewhere in Finland.

“It was also partly a reaction to the climate crisis,” says Lindgren. “If a foreign musician flies in to perform with an orchestra, surely it would make more sense for them to do something else as well while they’re here instead of just flying back out again?”

Such as giving a chamber music recital in a couple of locations and/or giving a masterclass? Coordinating things like this is at the core of the Helsinki Seriös concept.

“Because there was nothing to do during the coronavirus restrictions, I took the idea and ran with it to my long-standing collaborator Hannele Eklund,” Lindgren continues. The duo were joined as curators by violist Atte Kilpeläinen from the Meta4 string quartet and violinist Elina Vähälä.

A substantial financial grant was provided by the Pro Musica Foundation and the Jane and Aatos Erkko Foundation. The Finnish Broadcasting Company (Yle) was looped in, and the symphony orchestras resident at the Music Centre in Helsinki, i.e. the Helsinki Philharmonic and the Finnish Radio Symphony Orchestra, also took an interest. The desired concert venue in Helsinki was the venerable Sibelius Academy concert hall, which according to Lindgren is the best venue in Helsinki for both performers and audience. While the hall is in constant use by the Sibelius Academy itself, a solution was found by involving the Sibelius Academy as a partner in the project and scheduling the concerts on Sundays.

The logic of improvisation

While the mantra “location, location, location” still holds, we also need to consider what kind of content is provided to compete for the interest of the increasingly pluralist tastes of the musical public. The core concept of the Hietsu is Happening! series crystallised last July, as Yle streamed a marathon concert at Hietsun Paviljonki.

“A live broadcast lasting seven and a half hours! This was DIY with a vengeance, as it was just the three of us handling all the production aspects of the event,” says Antti Lötjönen.

The general purpose of the Hietsu is Happening! series is to be an arena for experimentation, bringing together artists from varied backgrounds and allowing various genres of music and branches of art to collide at concerts whose formats may be very diverse. Improvisation is the key to everything, not just in music, the trio say. Often an anchor point is found in literature, from horror stories to the Gilgamesh epic. And then they just let things happen.

“There’s a real risk of face-planting,” says Mikko Innanen with amusement. Petri Kumela notes that they have increased the degree of organisation year on year. The series is here to stay, and the organisers have shifted from completely open-ended structures to longer-term planning. But improvisation is still the key: “The most memorable moments are those when things come together on stage and create quite surprising experiences.”

Mikko Innanen explains that taking the meeting of classical and jazz, planned and less-than-planned music, as a starting point fosters fruitful collisions. “To simplify, jazz musicians ‘just play something’, while classical musicians practice specific, pre-written works. These two worlds feed on each other at our events,” says Innanen.

The trio hope to see increasing interaction between musical genres in the future, even if this is not always easy within currently existing structures.

“There are events that programme different kinds of music one after the other, but what if the people from the various backgrounds did the planning together, and everyone would be obliged to go beyond their comfort zone?” 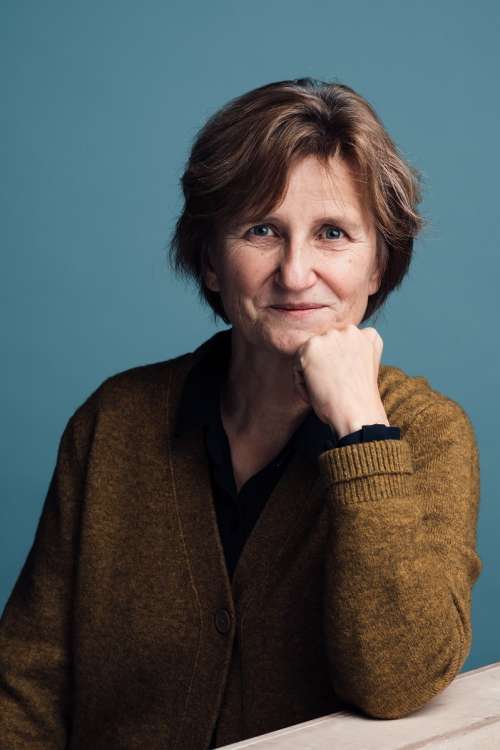 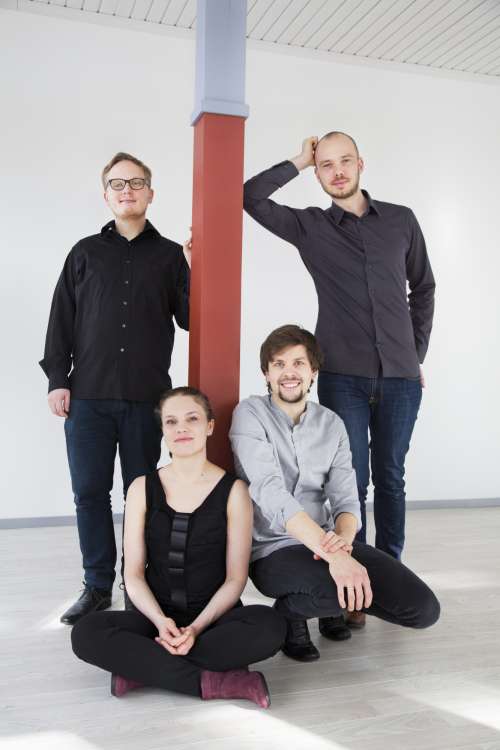 The Helsinki Seriös series, meanwhile, aims for success with a completely different concept. While the classical music sector has long been concerned about the genre labouring under the disadvantage of being perceived as serious and elitist, Helsinki Seriös has cheerfully adopted ‘serious’ as part of its very name.

“There’s nothing immersive or participatory about this. We wanted to do something quite traditional,” explains Hannele Eklund. “We feel that a traditional, high-quality concert series remains just as valid as a user interface as a traditional printed book.”

Helsinki Seriös is also not seeking to specialise or to build content thematically. “Musicians will perform whatever they wish to bring to the series,” says Lindgren. If anything, the series specialises in providing a chamber music series during the winter concert season in Finland to complement the summer festival season.

Lindgren compares this profile raising of chamber music to the mainstreaming of contemporary music. “I’m thinking of the efforts that Musica nova Helsinki festival has made to promote contemporary classical music. The organisers cast their net wide for partners, Yle broadcast the concerts nationwide, and now contemporary music is regularly included in concert programmes. We’re facing a similar task with promoting the notion that ‘there can be chamber music in the winter’!”

Regardless of content branding, all chamber music series face the same major challenge: continuity of funding. There is great enthusiasm, creativity and reactiveness beyond the large institutions, but continuous uncertainty is stressful. Innanen, Kumela and Lötjönen from Hietsu is Happening! are confident that the non-institutional sector will remain creative even if a more continuous and stable funding were to be made available from government or private sources. They are hopeful, as they have witnessed an increasing level of activity in chamber music.

“In recent years, musicians have started doing things themselves instead of waiting for someone else to do something,” Mikko Innanen sums up.