The music of Cecilia Damström stems from expressiveness and the desire to make a difference. In music, the tiniest gestures can come across as political statements. At the Ung Nordisk Musik festival in Tampere in August 2020, Damström’s Requiem for our Earth puts the theme of this year’s event – Music Ecology – up front. “I was able to include an unusually large number of themes important for me in this Requiem,” says the composer.

“There are so many angles from which to address climate change that I couldn’t decide which would be more important than another. There is no single answer to combating climate change,” says composer Cecilia Damström. When she was commissioned by Female Voice Choir Lyran to write a 30-minute work on climate change, she decided not to limit herself. She allowed Requiem for our Earth to embrace the multitude of problems, issues and aspects of climate change.

Incorporating dramatized elements, the work brings together a plurality of voices from quotes from Greta Thunberg and Pope Francis to official documents, public debate and legal texts. The tape part layers the music with external sounds such as pigs squealing, activists shouting, chain saws buzzing and icebergs crumbling. The choir leads the way through these scenarios in its memorial for the Planet Earth, yet the choir part itself does not point fingers or declaim political slogans. The piece is nevertheless an intense and even a harrowing experience, prompting listeners to form their own opinions. The listener is likely to end up with more questions than answers, though.

Requiem for our Earth was premiered last November and is now one of the key works on the programme of the Ung Nordisk Musik festival to be held with an environmental theme in Tampere in 2020. The work will be performed by the women of the Tampere Cappella and Näsin Ääni choirs. Ung Nordisk Musik is a festival that rotates between the Nordic countries, presenting as the name states a cross-section of music by young Nordic composers. The theme of each particular festival is explored in lectures, public discussions and this year also in the festival Zine, which includes articles for instance by John Luther Adams and Riikka Talvitie.

“Most of the composers and performers featured at this festival belong to today’s under-30s generation, whose lives have been largely defined by the ecological crisis. The goal is to share experiences, to collect viewpoints and to focus on concrete examples of how music and ecology intertwine in artists’ lives,” say the producers of the festival, Matilda Seppälä, Lauri Supponen and Dante Thelestam. 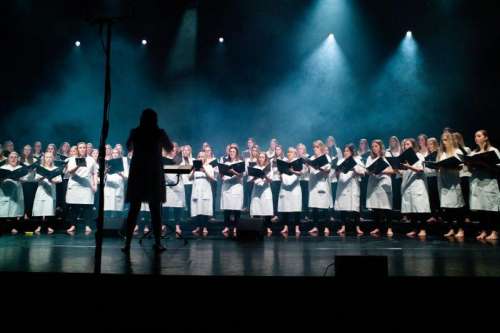 Requiem for our Earth consists of ten movements each addressing an area of the natural environment jeopardised by human activity: earth (mining), forests (excess felling), animals (meat industry), oceans (melting glaciers and dying corals). This modern requiem has a documentary approach: quotes are sometimes sung by the choir and sometimes heard as a recording of the original speaker. In some sections the choir sings a cappella, while at times it performs stage action as a counterpoint to the electronics. The tape and the choir engage in dialogue and often end up in conflict.

The work is powerfully visual, as it incorporates a video work by Marek Pluciennik that is projected both on the background screen and across the white costumes of the singers. Damström wanted to create a cross-discipline and cross-sensual artwork that would have a greater impact than a work that is only listened to. The video, lighting and movements complement the music and other sounds to create a veritable Gesamtkunstwerk.

“The more senses are engaged, the better the content hits home,” says the composer. “It was also important to bring in sounds that are uncomfortable to hear.”

Colour symbolism is used to enhance the message and to lend a certain universality to the visual aspect. At the end, the harmonies are associated with colours projected into the performance space by the choir members using torches. The choir surrounds the audience in a representation of dying corals, the colours gradually fading as the colour filters are removed from the torches.

Who gets to have a voice?

Cecilia Damström’s commission calendar has been bursting at the seams in recent years. She completes an average of seven works per year. Most recently, two works were premiered in early August: the song cycle Framtidens skugga [Shadow of the future] written for Monica Groop to poems by Edith Södergran and Helene, the last movement of Damström’s trilogy on great Finnish women. This trilogy consists of piano quintets with varying instrumentation dedicated to Minna Canth, Aino Sibelius and Helene Schjerfbeck and formed part of Damström’s residency at the Kokonainen festival.

She is currently working on a chamber music work for Pekka Kuusisto and an orchestral work jointly for the Joensuu City Orchestra and the Karelia State Philharmonic under the EU project ‘Big Music for Small Cities’. Damström is pleased to have had highly diverse commissions. But whatever the ensemble she is writing for, she always wants to address topics important for herself.

“I think about equality on all levels. Intersectional feminism, animal rights – those are the principal cornerstones in my music at the moment,” says Damström. Her orchestral work Tundo!, which was recently performed in USA for the first time, is dedicated to refugees, and her opera Djurens planet [Planet of the animals], now on tour as a school opera produced by the Finnish National Opera, is described by her as an eco-feminist and post-humanist work.

Damström stresses that contemporary music can make a difference in many ways. Titles and descriptions can put a message across, and the impact can of course be greater if there is a text involved. Vocal music can give a voice to someone, and that is always a choice. “It is important to hear the voices of young women, which is why I wanted to incorporate the voice of Greta Thunberg, a young woman activist, in the Requiem,” says Damström as an example.

In her quintet trilogy, Damström imagined in musical terms what the lives of well-known women in Finnish history might have been like. In Helene, the dance-like mood of her youth and the concrete sounds of domestic chores trace the life experience of a woman artist.

Damström has been very impressed with how eager Finnish choirs are to make statements with contemporary music. Lyran basically gave her carte blanche for the climate change commission, and Akademiska Sångföreningen [the Academic Male Voice Choir of Helsinki] has commissioned her to write one part of the trilogy envisioned by the choir of works about natural elements and renewable energy sources. “Given how limited the financial resources of choirs are, it is wonderful that they are challenging themselves and how we are accustomed to thinking about commissioning contemporary, relevant works,” says Damström appreciatively.

Damström describes her music as emotional and expressive. In the modernist tradition, emotions – conventionally seen as feminine – are typically downplayed as nostalgic or even negative features.

“Sometimes you feel that even a triad can be a political statement.” 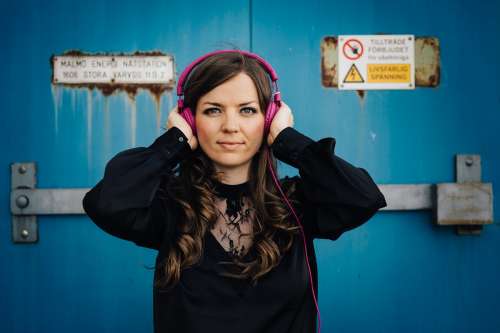 Ung Nordisk Musik 24-29 August, 2020 in Tampere, Finland. All the concerts were live streamed, you may watch a selection of videos here.