Kantele player Eija Kankaanranta constantly challenges herself as a musician and embraces the new dimensions she discovers in her instrument.

It is not exactly typical for a classically trained professional musician to join an ensemble in an entirely different genre of music. Or to play a gig on an instrument on which they are not officially qualified. The conventional conservatory-driven ideology of musicianship dictates that musicians should stick to their roles – but what if a particular instrument has no authoritative history to follow as a guideline? Then there is nothing for it but to adopt an approach of constant change and leaps into the unknown. For many practitioners on very old or very new instruments, this is exactly what they aspire to do, and kantele player Eija Kankaanranta is no exception.

Eija Kankaanranta ended up as a professional concert kantele player through the traditional route, via a music institute and the Sibelius Academy, yet today her day-to-day pursuits are anything but traditional classical music. Recently she has been playing in an opera by Kaija Saariaho inspired by Noh theatre, touring Japan with harpsichord player Assi Karttunen and guitarist Rody van Gemert, and playing electric kantele in the brand new ensemble Con Fusion led by composer Asta Hyvärinen. She has also found herself playing the dulcimer at concerts of the Finnish Baroque Orchestra and of Ensemble Ambrosius. Apart from all of this, one can hear her play whenever going to a concert at the Music Centre in Helsinki, in the interval call music written by Kaija Saariaho.

Saariaho’s opera diptych Only the sound remains will finally travel to Japan next year, and the Superpluck trio formed by Kankaanranta, Karttunen and van Gemert is also set to continue. Kankaanranta’s current projects further include finalising a disc containing the complete works for kantele by Juhani Nuorvala – her long-time collaborator with whom (and his dog) she happens to share a studio. Contemporary music and fostering new kantele repertoire are at the very core of Kankaanranta’s musical identity. In addition to the aforementioned Nuorvala and Hyvärinen, she has worked with composers such as Pekka Jalkanen and Minna Leinonen.

Custom instruments for the opera pit

Kankaanranta initially played the piano at what was then the Tampere Music Institute, and took up the concert kantele at the age of 11. Thanks to the inspiring kantele teacher Ismo Sopanen the kantele soon edged out the piano. Yet, perhaps surprisingly, she did not actually so much as lay hands on a traditional five-string kantele until her professional studies. Folk music is of course included in the curriculum for classical kantele players, and folk music has gradually made inroads into Kankaanranta’s musical identity too. She is a member of Juurakko, an ensemble almost ten years old that plays new folk music rooted in the blues. In January 2020, the band won the ‘Artist of the Year’ award at Finnish Etnogaala [watch the gala here].

“I’ve done my share of banging my head against the wall, frustrated that I can’t play the Piano Concertos of Beethoven on the kantele. But if I’d stuck with the piano, would I be performing music across such a wide range? Restrictions foster a wealth of opportunities. Kantele players today are involved in so many different things that it feels like the instrument no longer imposes any restrictions at all.” 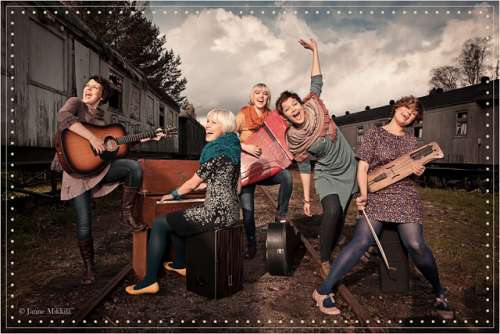 What Kankaanranta finds the most appealing about the kantele is that it is literally a hands-on instrument: you control the sound with your fingertips. The interplay between strings and fingers easily leads to improvisation, which for Kankaanranta is an important part of the process of practising; but she also sometimes improvises in her recitals. With some composers, particularly Juhani Nuorvala, her improvisational input turned the collaboration process virtually into co-authoring.

“I try to keep myself alert when improvising in the sense that an improvisation – whether completely free or within a given framework – has to be alive all the time. You have to be sensitive to the moment and try to reinvent yourself as you go, because otherwise it would be pretty much the same as repeating a notated piece,” she explains.

The concert kantele was developed in the 1920s, and genuine new repertoire for the instrument began to emerge in the 1980s as the result of efforts by the Kantele Association. As musicians grew more confident with their instrument, they were empowered to commission new works themselves. Today, kantele players are very active in commissioning.

Kankaanranta has found that the kantele is a veritable cornucopia for composers. “You can do a lot of things with the sound, because you’re in direct contact with the string. Of course, you can play the strings not just with the fingers but also with an electric bow or mallets, or else you can prepare the strings in some way, and so on. The tuning mechanism is unique, allowing step-free glissandi spanning a whole tone and facilitating microintervals. Overtones are also an interesting phenomenon. Everyone who picks up a kantele can discover something new in it!”

In her artistically oriented doctorate, completed in 2009, Kankaanranta focused specifically on the multitude of sonorous properties on the kantele.

“I didn’t want to talk about ‘special’ techniques, because I feel that all sounds are part of the same sound space, whether they have a pitch or not,” she says.

In addition to exploring sonorities, Kankaanranta is fascinated by the potential of the kantele for being edgy and coarse – something that does not really correspond to the image that many people have of Finland’s national instrument.

“I like rhythm and edginess in general, in any music and in any performance,” says Kankaanranta. “Adapting rhythm music for the kantele or playing the quicksilver passages written by Saariaho represent an energy-intensive challenge, because they require extreme precision in damping the strings and working the tuning levers, and sharp articulation.”

Eija Kankaanranta and Aino Peltomaa will perform at the November Music festival (5-14 November, 2021) in the Dutch city of ’s-Hertogenbosch.