Genre-bending trio Elifantree keeps challenging itself – this time creating music with eight drummers in as many countries.

“The idea with this project was to challenge and develop ourselves. We wanted to start the creative process from scratch with each drummer,” is how singer Anni Elif of Elifantree describes the group’s most ambitious project to date.

In what sounds like a fantasy in these pandemic times, she and fellow multi-instrumentalist Pauli Lyytinen spent the entire autumn of 2018 travelling through eight countries to create the band’s sixth album. They recorded improvisations with eight drummers, including the group’s own Olavi Louhivuori. He played on two tracks, lending his seat to colleagues for most of the other tracks.

“We really had to live in the moment and be as present as we could and come up with the concept on the spot each time,” says Lyytinen. “From a creative point of view, this was quite demanding. Creativity needs time to rebuild. We brought many different instruments and setups to vary the process.”

Lyytinen plays saxophone, electronic wind instrument (EWI) and an array of electronic and percussion instruments. Elif, who studied cello at the University of Gothenburg, doubles on keyboards and kemençe, a stringed bowed instrument from her father’s homeland, Turkey. Their eight collaborators played a wide range of percussion and drums in many styles.

“Besides Olavi, we only knew one of them well beforehand, Andreas Werliin, who had been in a band with Pauli,” says Elif. “We had met Yuko Oshima a couple of times on tours, and Lisbeth Diers and I played together 15 years ago. But we were familiar with each drummer and had heard most of them live. We wanted to create a colourful entity by combining stylistically different artists. The main theme was to find artists who follow courageously their own paths, as we do,” she says.

Since its inception in 2007 as an acoustic trio with drummer Tatu Rönkkö, Elifantree has been one of Finland’s most inventive and uncategorisable groups, drawing on jazz, fusion, theatrical Kate Bush-style art-pop, experimental and world music, and increasingly electronics.

Art-rock and progressive rock have also always been among the arrows in their quiver. So an ambitious, sprawling 18-track concept double album is not a surprising move for the group. However there are only a couple of long, multi-sectional tracks like those favoured by the classic prog bands. Most clock in around three minutes or less, including brief interludes based on field recordings.

The title, Hachi, meaning “eight” in Japanese, refers to the number of countries and collaborators involved. “Kasi” (slang for eight in Finnish) is also the name of Lyytinen’s summer cottage in Eastern Finland, where the Finnish tracks were recorded, including one called Kasi. 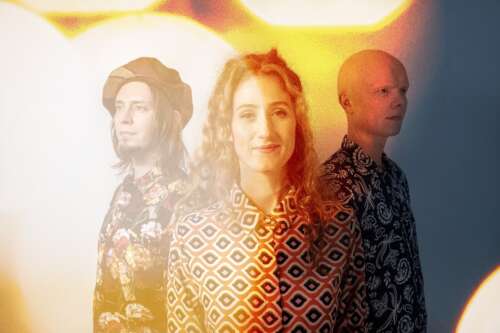 Revolving drummers – but no Spinal Tap

In late 2015, Rönkkö was replaced by Louhivuori, who already had an established international jazz career with the likes of Oddarrang, Ilmiliekki, Piirpauke, Tomasz Stańko and Marilyn Crispell, and now leads Superposition.

Working with so many outside drummers might set off alarm bells about Louhivuori’s status – was this a way of auditioning for a new drummer? Is the band on its way to an endless Spinal Tap-like succession of drummers? Lyytinen quashes any doubts about Louhivuori’s future with the group.

“Olavi is definitely our drummer! We were without a drummer for a short while in 2015 after Tatu left. At that point, we had an idea of working with various different drummers and applied for a grant to realise this vision. We started to work regularly with Olavi before we got the answer and decided to still make this project happen as planned,” he explains.

“At one point we played with the thought that Elifantree could be a changing combo with the core being Pauli and myself,” adds Elif. “We dropped this idea pretty soon after we found a common tone with Olavi, though.” Indeed, the three plan to record new music as a trio this year. “After two grand collaboration albums, we have a tangible urge to strip down and go back to basics,” she says.

Louhivuori describes the Hachi project as “very inspiring”. “It’s also been great motivator, since all of the other drummers on the album are really amazing and I have long admired their approach on the instrument. So now they have contributed something completely unique to the band, which gives me a great push and possibility to learn from all of them,” he says.

On the road was an another long-time member of the team: sound engineer Joonas Saikkonen, who built a mini-studio from scratch in each space. “Joonas played a big role in this process. He brought many good ideas during the journey and provided fresh angles,” says Elif.

Saikkonen had worked on several Elifantree albums as well as two of Lyytinen’s other bands, Magnetia Orkesteri and Machinery, along with other groups such as Mopo and Ainon. He first used his portable recording setup during the summer before the Hachi odyssey, when Elifantree recorded Blood Moon, an all-improvised album with the electroacoustic ensemble Tölöläb, released in late 2019.

“Blood Moon was recorded just before we started the Hachi journey. The work with Tölöläb had similarities to the drummer project, in the sense that we didn’t really know each other before and spent several days creating music together from scratch,” says Lyytinen.

Elif’s wide-ranging, emotive vocals have always been the most distinctive aspect of the Elifantree sound. On this album, though, her voice keeps a lower profile. Less than a third of the tracks featuring lyrics, mostly in English and one in her native Swedish. “For some tunes perhaps more subtle vocals, or none, were suitable, as on the Japan tracks or on the pulsating Clockwork from Switzerland,” she suggests, citing a gamelan-inspired track featuring Swiss musician Julian Sartorius on various pots and percussion.

“That’s how it’s always been with Anni and Pauli. We trust that things will emerge as long as we keep our minds open and stay open to different ideas – no matter how wild or crazy.”

In Copenhagen, the duo recorded in a former church with Diers, who also used a broad range of percussion items including pottery, bells and foot rattles. “We were inspired by each meeting, space and culture,” says Lyytinen. “We adapted our way of playing to each drummer and each space. For instance, there was no escape from the 14-second reverb in Tomba Emmanuelle” – a mausoleum in Oslo designed by Norwegian artist Emanuel Vigeland. There, the duo improvised with Norwegian percussionist Terje Isungset, known for crafting his own instruments from natural elements including ice.

In the dimly-lit, reverberating chamber, Isungset played rocks and other self-made percussion while Lyytinen seemingly tapped into Norway’s ethereal “fjord jazz” on saxophone and Elif sang and played the kemençe.

These improvisations led to Mausoleum I and II, the latter an eight-and-a-half minute epic that closes the album. Isungset conjures an atmospheric soundscape that suggests tinkling keys and bottles in a vast, echoey space. Elif draws on her classical background for a madrigal sound, suggesting a melancholy queen pacing the halls of a vast, draughty castle. The centrepiece of the album, Solace, also exploits an extraordinary acoustic space: an old water tower in Alsace, France.

The album’s longest piece at nearly 11 minutes, it marks the beginning of the second disc, beginning with mellow vocals and echoey sax. A third of the way in, an organ and Oshima’s Tibetan singing bowls come in gradually. The song builds slowly as the vocals move into the distance and then close again, before a finale of impassioned saxophone.

The two tracks recorded in Japan, meanwhile, include field recordings including the Tokyo subway, as well as heavily treated, experimental vocals that blur the boundary between voice and rhythm.

The UK sessions produced the album’s most appealing track, Breezeblock Shed, which is nearly a three-minute pop song. With its shuffling funk beat and coy, cartoonish vocoder vocals, it wouldn’t be out of place on a Gorillaz album. This might have been a natural choice as a first single, but that honour went in March 2020 to the bewildering Black Sheep, based on a vocal-keyboard improvisation by Elif. The result is dark, almost industrial, with Lyytinen adding a screaming guitar effect and wild bird calls.

“Recording Black Sheep by the lake in Savo was fun and inspiring. Anni spent hours in the shed working with this song and invited Pauli and I to play our parts, which we did very quickly and spontaneously,” recalls Louhivuori. “That’s how it’s always been with Anni and Pauli. We trust that things will emerge as long as we keep our minds open and stay open to different ideas – no matter how wild or crazy.”

Black Sheep was followed by a gentler second single, Gold Dust, which surfaced last autumn, featuring Swedish drummer Werliin, known for his work with Fire! Orchestra, Ane Brun and many others. The other guests, too, all have fascinating backgrounds. Marc Pell plays in London experimental pop band Micachu & the Shapes and has worked with British electronic artist Matthew Herbert, as has Swiss percussion pioneer Julian Sartorius.

One of the two Japanese drummers, Ryosuke Kiyasu, started out in punk and is known for his nearly-violent live performances. Oshima is based in France, where she has played rock, pop, electronica and jazz, including as a duo with prominent US drummer Hamid Drake. All these influences feed into Hachi’s sequence of complex aural landscapes, crafted in post-production.

Due to the pandemic, Hachi’s release was postponed twice. It is now scheduled for a Feb. 26 release in various formats, with a German release in April. “We put a lot of energy into mixing everything properly, after getting some distance to the material,” says Lyytinen. “We combined some jams, and added field recordings. We tried to find the best order to glue this journey together, to create new musical landscapes, a grand collage if you will.”

Elifantree's album Hachi will be released on 26 February, 2021.