The cultural cold war between the superpowers that began after the Second World War played a major role in shaping the international arts and culture scene as we know it today. This series of articles discusses the impacts of cultural diplomacy, particularly that of the USA, on Finnish music from the days of the Cold War to the present. This third part examines how American avant-garde came to Finland in the 1960s and what impacts it had.

As discussed in the first and second articles in the present series, during the Cold War the USA invested in cultural life in Europe by funding and supporting concerts, festivals, tours and cultural exchange programmes promoting American music and artists. This had an impact on the Finnish music scene too.

Berlin became a hub for the international avant-garde in the 1960s. Thanks to the active cultural policy of the USA, many American artists resided in the city, and in West Germany in general. Experimental music did not enter the official US cultural agenda until the 1960s; previously, experimental art had been considered too ‘esoteric’ to represent American cultural values. Artists such as John Cage and Merce Cunningham did not have access to the cultural exchange programme until the 1960s, even though they had established a reputation in Europe earlier.

Excursions by American avant-garde artists were funded by bodies such as the Ford Foundation. The postgraduate grants of the Fulbright Foundation also played an important part in cultural exchange. In Germany, avant-garde artists were even able to make use of the financial resources of the US military. One of the most important funding channels for experimental art was the German Academic Exchange Service (DAAD). In 1963, at the request of the Ford Foundation, the DAAD assumed responsibility for its invitation programme, which hosted academics and artists in Berlin for short-term stays. This marked the beginning of the DAAD Artists-in-Berlin Programme. Invitees included John Cage, Morton Feldman, Diamanda Galas, Dick Higgins, Steve Reich, Terry Riley, Fredrik Rzewski, David Tudor and La Monte Young, to name but a few. They gave talks on experimental and avant-garde music at America House, which promoted American culture in Berlin.

The international avant-garde in Finland

The trend to break the boundaries of musical material and form that began in the 1950s culminated in the experimental music of the 1960s, where the generation that had not experienced the war abandoned the technocratic narrow-mindedness and political caution of previous generations. New international influences became conspicuous in that musical experiments were introduced to concert halls, and indeed onto the streets.

Finland’s first electronic music studio was set up at the University of Helsinki in 1963, and in the same year Erkki Kurenniemi, a

As the USA was sending experimental and avant-garde artists to Europe to enjoy residencies, the fringes of Europe sometimes benefited from these sojourns too. Several American artists visited Stockholm to attend events organised by Moderna Museet or Fylkingen – New Music and Intermedia Art. Finnish composers have traditionally had close contacts with Sweden, and it was there that they often came into contact with the international art scene.

Of course, Finns also encountered American artists on excursions to central Europe. Otto Donner, for instance, met Terry Riley at the Zagreb Biennale and Ken Dewey in Paris in 1962. These meetings led to a collaboration culminating in Finland’s first ‘happening’, Street piece Helsinki, in August 1963. Apart from Donner, Dewey and Riley, this involved at least Kaj Chydenius, Airi Hynninen, Erkki Kurenniemi and the Helsinki Student Theatre. The piece consisted of jazz musicians improvising on the basis of street noise and another group of musicians performing a score that was written by Riley on an enormously long sheet of paper in real time. Hynninen danced on Market Square, a typewriter clattered at Runeberg’s statue, and Dewey, Donner and Kurenniemi conducted a survey among passers-by on the streets, asking them about ‘happening’ art. 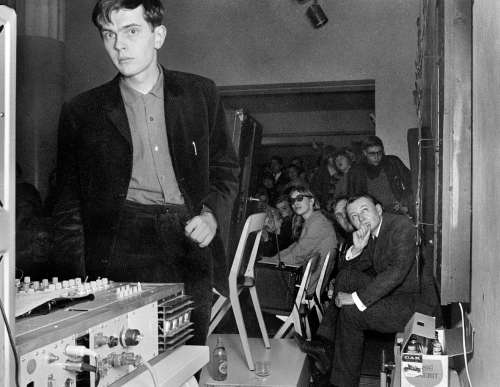 Erkki Kurenniemi and his Integrated Synthesizer at the Electro-Shock-Evening, Finnish Underground Happening in Helsinki on February 9, 1968. Photo: Mikko Oksanen / Lehtikuva.

Artists and specialists from the USA

Many of the key international avant-garde events that took place in Finland in the 1960s would never have happened without the US cultural programmes. It was thanks to these that, for instance, composers Fredrik Rzewski and John Cage visited Finland in 1964. Both were resident in Berlin on US scholarships at the time.

In the 1960s, the US State Department also sent performers such as the Cleveland Symphony Orchestra and the University of Illinois Jazz Band to Finland. Of the specialists dispatched by the US State Department, one that was of particular interest for Finland’s musical life was William Strickland, an orchestra conductor who had previously been a cultural diplomat posted to India, Poland and Iceland. He was in Finland as a US Specialist-in-residence in 1964 and 1965 and conducted at least the orchestras of Lahti, Oulu and Tampere as well as the Finnish Radio Symphony Orchestra in concert. In May 1965, Strickland noted in his report to the US State Department that working with provincial orchestras was particularly rewarding: “They seem to be untouched areas.”

Strickland’s goal was to get orchestras to perform American music, and in this he was successful. He noted that Charles Ives in particular worked well “overseas”. He recorded Ives with the Finnish Radio Symphony Orchestra and applied for funds from the State Department for other recordings too, as donations through the Finnish American Society. He was closely connected with young Finnish composers and conducted works such as Erkki Salmenhaara’s First Symphony (1962/1963) and Otto Donner’s Hommage à Ives (1964). He recommended Seppo Nummi to the State Department as a specialist guest and remarked that Nummi was “anxious to have further American collaboration”. A few years later, Nummi did travel to the USA as a specialist guest invited by the State Department.

Although visits by American creative artists to Europe attracted considerable attention, their music was not really performed very much. In that sense, the US project never fully achieved its purpose. On the other hand, the very presence of American artists in Europe had a crucial impact on how the history of Western art music was written after the Second World War and how it is appreciated, and this influence extends to the present day.

In Finland, experimental music was received with suspicion and antipathy. Concerts given by young musicians where they “kicked the piano, broke beer bottles, threw peas and otherwise sought to create sounds by the most astonishing means imaginable” were dismissed as the lunatic fringe of avant-garde. These experiments were short-lived, and reception of experimental music did not develop in Finland until decades later.

Towards the end of the 1960s, radicalism in the arts shifted its shape. Young people began to question the American rhetoric of freedom, peace and progress. The underground and hippie movements involved a fierce resistance of war and of cultural and economic imperialism. However, the US cultural policy programmes went on.