The jouhikko, a traditional bowed lyre that represents a dead end in the evolution of musical instruments, is enjoying a renaissance not only in Finland but internationally too. Jouhikkos are being played and built as far afield as in the Americas, by amateurs and professional instrument makers alike. But what should a jouhikko actually look and sound like? What are the ideals governing its development? Jouhikko virtuoso Ilkka Heinonen adds his two cents.

The repertoire of the traditional Karelian jouhikko players, born around the middle of the 19th century, mostly consisted of dance music and hit songs of the day arranged for the instrument. Most of the instruments were made by the musicians themselves, and even instruments made in neighbouring villages – such as those made by Feodor Pratšu and Juho Vaittinen in Impilahti – could differ remarkably from one another in appearance and structure.

By the beginning of the 20th century, instruments more modern and stronger in tone had replaced the jouhikko in accompanying dance music, leaving not much of a niche for the instrument. The jouhikko fell silent almost completely for decades except for a handful of enthusiasts such as the late Professor Martti Pokela (1924–2007), a champion of folk music and the kantele, and conductor Juha Kangas (b. 1945), whose instruments were designed with considerable creativity by instrument maker Carlo Bergman.

A new chapter in the story of the jouhikko began in the early 1980s with a gathering of folk music scholars, musicians and instrument makers in Kaustinen. One of them was instrument maker and musician Rauno Nieminen (b. 1955), who had been exploring the playing and building of jouhikkos since late in the previous decade. It was also around this time that the groundwork was laid for the teaching of folk music practices at the Department of Folk Music at the Sibelius Academy. 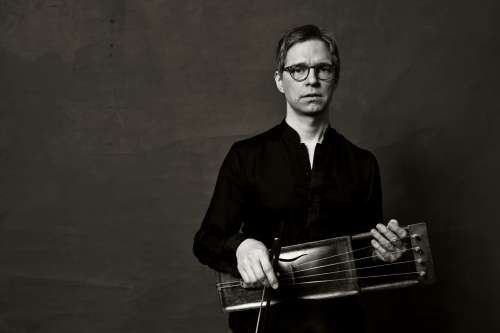 Fast forward 35 years: Finnish folk music teaching has become known and respected worldwide, alumni of the Sibelius Academy perform concert music based on Finnish folk traditions all over the globe, and Rauno Nieminen, with a doctorate under his belt, is a veritable legend in the playing, making and scholarly study of the jouhikko.

The jouhikko may have lost its status as a dance music instrument for the common people, but in modern times it (like many other folk instruments) has found a new context in concert halls and clubs. The performing practices of Western classical music, jazz and popular music have informed the development of new types of expression for the jouhikko too, and these in turn have governed the development of the instrument itself: chamber music contexts require a stronger sound from this traditionally soft-spoken instrument. A club environment requires physical properties such as reliability under varying temperature conditions and a steady sonic output for amplification purposes.

Yet perhaps all these changes have caused something of the essential character of the instrument to be lost? How can one define the key parameters that make a jouhikko a jouhikko? Some name horsehair strings as the main feature, even though most of the instruments played on archive recordings have gut strings; but we could equally well name structural features, bowing, repertoire, style or the unique technique of using the backs of the fingers on the left hand for fingering. How much can any or all of these be changed to bring the jouhikko into tune with the times but without losing its uniqueness?

I have worked with Rauno Nieminen on jouhikko development since the early 2000s. I commissioned my first jouhikko from Nieminen in 2002, and for the past twelve years we have played together in the jouhikko quartet Jouhiorkesteri. This is not only an excellent platform for creating new jouhikko music but also a never-ending seminar for exploring repertoire, playing techniques and ways of improving the characteristics of the instrument.

My personal contexts of jouhikko performance are very varied. Some of the concerts I play in are amplified, as with Jouhiorkesteri or my own Ilkka Heinonen Trio. On the other hand, my passion for performing early music and contemporary music – such as premiering two concertos for the jouhikko – require quite different properties from the instrument than club gigs. It can be quite challenging to combine a projecting, clear sound with the soft, whirring sound rich in overtones that is considered typical for the jouhikko. I have ended up using different jouhikkos (all but one built by Nieminen) for different needs.

At the moment, I mostly perform using a jouhikko that I made myself under Nieminen’s guidance. It has gut strings, a hollowed-out body resembling that of a violin and a modified treble viol bow. My aim was to introduce features of the viol family to the jouhikko, and this instrument does have a glowing, bright and carrying sound, very feasible for chamber music. Yet it lacks something of the wild sizzling overtones and scrape of the bow that is part of the essence of the instrument – even if these very properties make it impractical and unreliable in concert. Reinforcing one property reduces another, and sound ideals are very firmly context-bound.

It is probably impossible to arrive at an unambiguous definition of a sound ideal. Even if we compare our present sound ideals to the historical scrape and buzz of the heterogeneous museum instruments, I find it a daunting task to deduce in which direction we should guide the sound of the jouhikko.

Because sound ideals are so firmly context-bound, I have ended up with a very unanalytic and subjective approach to the "development" of the sound of the jouhikko. My feeling is that the sound of the jouhikko reminds us of our fragility and sensitivity, and also of our honesty and sincerity – in a word, integrity. Everything, in fact, that makes us so beautiful in our imperfection. This is why I continue to explore the sound of this instrument, left behind in the evolution of instruments and saddled with a truly wretched user interface, because it makes its player, and hopefully listeners too, remember just what it is to be human.