Folk music through a feminist perspective has been a thing in Sweden for several years, but Finland’s first series of feminist folk music concerts is only now taking place. Singer and journalist Amanda Kauranne and her team explore difficult topics and taboos of womanhood in four concerts.

“My mother raised me to be a feminist,” says singer and journalist Amanda Kauranne softly, explaining the background to the concept. She has been studying the status of women in the folk music sector for a couple of years now in her radio programmes and articles (see e.g. her article in FMQ).

“Somehow I had imagined that the field of folk music – my home ground, after all – would be more favourable towards women,” says Kauranne. “But here, as in society at large, the problem is in the deep structures.” Kauranne feels privileged in that as a singer it was very easy for her to find strong women as role models. For instrumentalists, it has been much more difficult to find such inspiration, and powerful instrumentalist women such as Maria Kalaniemi and Sara Puljula must have been very important influences for many.

Everyone involved in this concert series is a woman, from the logo designer to the sound engineer. In addition to Amanda Kauranne, the band on stage includes Helmi Camus (keyboards, bass), Minna Koskenlahti (percussion) and Sini Siipola (dance). The Verta [Blood] concert also included Maija Kauhanen (kantele), and the Propaganda concert featured Hildá Länsman (yoik, vocals). The working group conveniently doubles as an a cappella vocal ensemble.

“Singing about your own true love is wonderful enough, but I want to sing about other things too,” says Amanda Kauranne with a sigh. “I want to sing about the whole spectrum of human life, without my gender determining what I should sing about. This concert series is all about bringing up taboos and tearing them down. Oversexualisation is omnipresent in our society. Women are a threat when they speak out; women are still expected to ‘keep silent in church.’ What is so frightening about women speaking in an expert capacity, for instance?”

The job profile of a folk musician includes being well versed in history. Many topics that were traditionally sung about remain terrifyingly relevant today. Hearing a song listing the herbs that were known to induce miscarriages, one cannot help but think of how many countries there are where abortion is still illegal. Amanda Kauranne reminds us that while many of us are horrified by female genital mutilation in developing countries, we should remember that clitorectomies were practiced in the West as recently as in the 1950s – ostensibly for medical reasons! 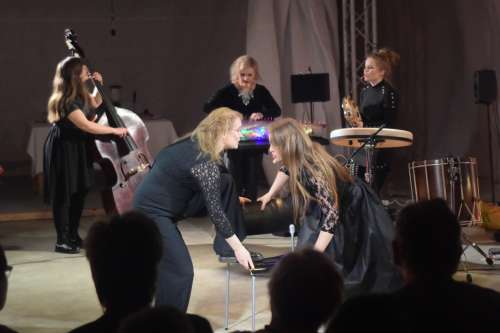 Next, the concert series will take up propaganda. Is folk music political? Amanda Kauranne considers her answer carefully.

“The very term ‘folk music’ has political nationalist roots, and there has also always been a political slant to the issue of which music can be considered folk music in the first place. At some point, folk music did renounce politics. But on the other hand, it can also be considered a political act to detach oneself from all this and just play a groovy polska!

“Lönnrot, folk songs, the kantele – all these are part of the story of the Finnish national identity. But today we know that the kantele is a Finno-Ugric-cum-Baltic instrument and that the metre of runo songs was widespread around the Baltic Sea.”

Amanda Kauranne also notes that a vast percentage of the poetry that went into the Kalevala was collected in Dvina Karelia, which was never part of Finland at any time in history. Many texts about folk music overtly or by implication employ a definition of Finland that extends far beyond the country’s modern borders.

Not just about women

After propaganda, the concert series will conclude with a concert about sanctity. If it is anything as impressive as the earlier concerts, the series as a whole will have had a truly mind-blowing impact on its audiences.

We should remember that feminism – both generally and in this particular case – is not just about boosting the status of women, but about helping everyone. It can help all genders become liberated from norms and assume a more diverse role in society. Amanda Kauranne certainly hopes so.

“First we need to empower women. Women have been put down for centuries and still encounter hate speech if they appear to take up too much space. But after that, of course, it’s about empowering everyone!”

The 'Propaganda' concert at the main building of the Finnish Literature Society on 21 September, 2018.

The concert series was awarded the "Phenomenon of the year" award at the Etnogaala event on January, 2020.