In 2016 women are still under-represented in classical concert repertoire, never mind the canon. At contemporary music concerts, however, women appear as composers with increasing frequency. How should we address the issue of a composer’s (female) gender in this day and age? Are we really still talking about this, in Finland?

Few people know about Finland’s first female professional composer, Ida Moberg (1859–1947), even though she conducted the premiere of her symphony in 1906 and won a composition competition with her work Tyrannens natt (Night of the tyrant) for choir and orchestra in 1909. Helvi Leiviskä (1902–1982) might be somewhat more familiar but her three symphonies have also failed to find their way into the core repertoire.

Finland did not really have a strong tradition of women composers until the emergence of Kaija Saariaho (b. 1952). Her ascendance to the international elite in contemporary music has been of huge importance to the growing body of her junior colleagues. 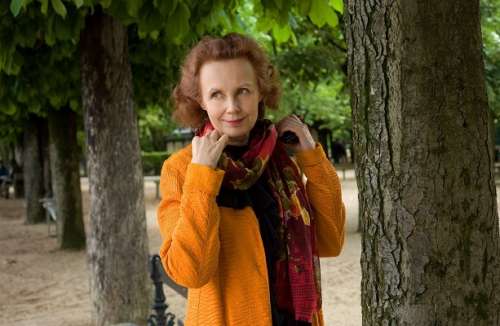 From woman composer to composer

Minna Leinonen (b. 1977) is a composer who has firmly established herself in recent years. She notes that Saariaho blazed the trail for younger generations to profile themselves not as women composers but simply as composers, and there is no need for affirmative action in Finland. “When you live in a country where women have equal rights and equal opportunities to get their works performed, then it should be enough just to compose.”

Leinonen says that she imagined that the question of a composer’s gender would no longer be relevant. “And yet many journalists bring up this issue when interviewing a composer who happens to be a woman. What does that say? Is a female composer still a curiosity?”

Kaija Saariaho remarks: “I should think that the situation is rather good in Finland today, and attitudes to women as composers have changed dramatically if you compare the present situation to what I experienced as a young composer,” she says. “Back then, a few composers teaching at the Sibelius Academy actually refused to teach me because I was a woman.” Later, Saariaho imagined for a long time that the problems had gone away. “I avoided addressing the issue, because I considered it more important to talk about the music itself. But a few years ago I suddenly realised that though my status as a composer is wonderful and I am very rarely disparaged professionally because of being a woman, the situation in general is not as uncomplicated as I had imagined, particularly for the young generation.”

Saariaho concludes that even though the generation immediately following her had an easier time than her, even globally, the situation is not the same everywhere. “Also, the equality drive of 30 years ago did not take root and grow in the way that seemed self-evident at the time. The questioning of women’s rights, racism, inequality and prejudice have returned and influenced the attitudes of the public at large.” 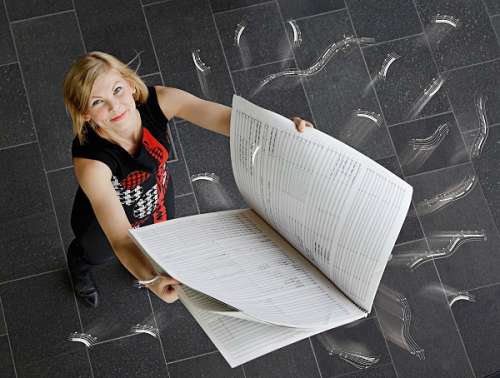 Few today question whether composing is a suitable occupation for a woman, but there are lingering suspicions of the female gender being used as a trump card. “A male colleague told me a few years ago that these days you have to be a young woman to get grants and commissions,” says Leinonen. “So women have it easier, do they? We work just as hard as men do; we don’t write music with our gender.”

Resentment is quicker to arise as an increasing number of people are vying for a shrinking pool of resources. It is easy to believe that if a colleague receives a grant it is due to some factor other than professional competence – connections, age or gender, perhaps. The notion of a “woman card” forces women into a struggle to prove their credibility, to qualify for the “open series”, as it were.

But the environment may also be encouraging. Leinonen points to the importance of the support she received from her teachers, especially Veli-Matti Puumala and Jouni Kaipainen. Saariaho says: “When I was a student, the saving grace was that I had great fellow students, almost all of them men, and of course there was my teacher Paavo Heininen.” On the other hand, Saariaho has had her share of envious quips. “It makes me smile to hear my male colleagues speculate that a large part of my success must be due to my being a woman!”

The Society of Finnish Composers has 203 members, of whom 21 are women – about 10%. Leinonen was recently elected a member of the board of the Society and hopes to be able to contribute to a broadening of employment prospects for composers in educational and cross-discipline projects. She does not consider herself as automatically representing the mandate of women composers; she simply represents the entire membership. “Treating our members equally is a goal that all board members share.”

Marcia Citron notes in her book Gender and the Musical Canon (1993) that women as professional composers have challenged conventional wisdom about both composers and women. Leinonen has noticed that being a professional composer still requires courage and tenacity, which do not necessarily come naturally. “I’m a child of the 1980s, when girls were brought up to be polite and obedient. I’ve had to learn how to break out of the box and take risks!”

Many women composers in the course of history remained unmarried. In today’s Finland, day-care and pension security for grant recipients provide a better foundation for combining family life and a career as a composer. Leinonen says she worried about her budding career surviving motherhood. “I knew I wouldn’t be able to write music as intensely as before, and I also wasn’t prepared to compromise on spending time with my child. But when my first one was born, I realised that the process strengthened my composer identity.” 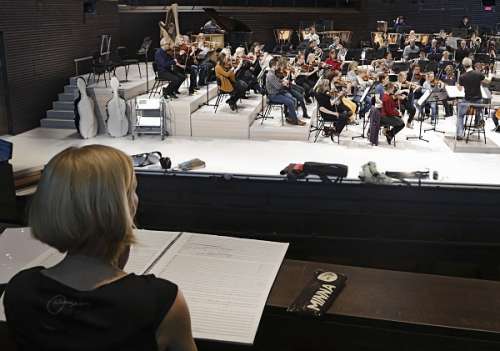 Contemporary reviews of the Piano Concerto of Helvi Leiviskä noted that it was “somewhat in a man’s voice”. This comment, for all that it shows a flagrant bias, also illustrates that the models to which women writing music aspired were, unavoidably, male. Favouring extensive musical forms was a composer’s way of seeking to be taken seriously.

The history of music is full of men talking about women, but in contemporary music we can hear women’s voices. In 2003, Lotta Wennäkoski (b. 1970) wrote a piece entitled N! (Naisen rakkautta ja elämää) (Love and life of a woman), which engages in dialogue with Robert Schumann’s song cycle Frauenliebe und -leben and has become a classic in its genre.

Leinonen’s radiophonic work Äiti – iäti (Mother – forever, 2012) is based on experiences of joy and sorrow among mothers of her acquaintance. In Naisen muotokuva (Portrait of a woman, 2013), the titles of the movements are extracts from reviews received by women artists in the 19th century. “I wanted to show how much more equal our society has become in a century,” says Leinonen. “And going forward another century, there will be no need to talk about women artists in particular except in a historical context.”

In Låt mig vara – Anna mun olla (Leave me alone), which Leinonen wrote for the Lyran Academic Women’s Choir, she combined texts written by choir members with poems by Edith Södergran. “Many of the women had never revealed their most painful experiences regarding their body image or physical appearance to anyone; the shame ran too deep. I wanted to use this work to tell them that they are all beautiful.”

Saariaho’s monologue opera Émilie and grand oratorio La Passion de Simone gave voice to an 18th-century scientist and a Jewish philosopher respectively. “I don’t feel that I chose these women to write about specifically in order to promote a feminist agenda,” says Saariaho. “It’s more a question of addressing themes that are important to me. I was interested in Émilie du Châtelet and Simone Weil long before I had the idea of writing works for the stage about them. Their exceptional strength and mental independence were pioneering and exemplary, and as such empowering.”

The majority of students at music institutes are girls, and there is no longer anything strange about women being employed as instrument teachers or musicians. Certain institutions, such as the Vienna Philharmonic, remain strongholds of male dominance, and the vast majority of conductors and composers are still men. In Finland, professional composition tuition is solely in the hands of men, but at the music institute level the situation is different: Leinonen, Riikka Talvitie (b. 1970) and Sanna Ahvenjärvi (b. 1972) are all engaged in teaching budding young composers.

Saariaho’s music has reached venues that most contemporary composers of either gender can only dream of. A new production of her opera L’amour de loin (2000) will be staged at the Metropolitan Opera in New York in December 2016. In February, the New York Times pointed out in a headline that L’amour de loin will be the first opera written by a woman staged at the Met since Der Wald by Ethel Smyth (1858–1944), performed in 1903.

“Opera remains largely the province of men; there’s big money involved, and people throw their weight around. Women still play a very minor role in it,” notes Saariaho. “The fact that [the New York Times] focused on me being a woman is typical of today’s scoop journalism – a shock effect to catch the attention of the public. Naturally, I would have liked the publicity to focus on the opera itself, although I suppose it’s good that this cat was let out of the bag; maybe it’ll make some opera director somewhere think twice about things.”

Saariaho says that getting L’amour de loin to the Met has been a ten-year project. “I’ve grown accustomed to the idea and no longer think of it as a major conquest. It’s a fine venue, and I’m very happy to have my music performed there, of course. I hope that everything will go well; I find all the attention and the limelight somewhat awkward and tiring.”

Yes, we’re still talking about this

The woman question is a current one in music, and not just in Finland. According to a recent study (British Academy of Songwriters, Composers & Authors: Equality and Diversity in New Music Commissioning), commissioning parties in the UK, particularly those commissioning orchestral works, tend to favour male composers. In Sweden young women have set up a network named Konstmusiksystrar (Art music sisters) to correct anomalies like this. So there is still work to do.

It is possible that maintaining discussion about the gender issue serves instead to perpetuate the marginal status of women as composers – the notion that there are real composers and then there are “women composers”. On the other hand, not talking about this might lead to a false sense of security; even in our apparently equal Nordic society there are still attitudes and structures that constitute obstacles to women seeking to create careers as composers. So I suppose the best thing to say is this: we must remain vigilant on equality issues.

A set of theses was published in Finland in January 2018 with the intent of actively promoting equality, non-discrimination and pluralism in Finnish music. On 8 March 2018, 90 key organisations and companies in the sector have signed the theses and thereby committed to their goals.