The huge tide of humanity that almost overwhelmed the 2017 NMD was also its triumph: a characteristic gift from London, European capital of creative curiosity and of the big crowd.

Was the opening concert of the Nordic Music Days really part of the Nordic Music Days? It was hard to tell. Yes, we were in London – most of us had come to terms with that already. But we were listening mostly to old music (Sibelius) played by a London orchestra, surrounded by its regular subscribers and guests. The conductor Esa-Pekka Salonen confirmed after this first performance of the festival that he, in fact, had programmed the concert alone with “no committees involved.”

That’s not really in NMD’s constitution, which had its own artistic director in the form of Martin Q Larsson and series of programming committees. But the paraphernalia of distractions and opportunities offered by Southbank Centre, which hosted the event in association with the Swedish Society of Composers, forced NMD into taking on a slightly different guise this year. That included the first of the Philharmonia Orchestra’s regular Thursday night concerts, which was co-opted into the festival lineup as part of the deal.

This became a festival of uninvited guests. That was the point. And when a few hundred new-music specialists from the north meet in a building that has a footfall of 14,000 souls per day, the nature of the meeting changes entirely. There was no intimate huddle of Nordic folk at Southbank Centre. Instead, we experienced an esoteric new music conference gatecrashed by thousands of people every hour – from babies and pensioners to hip-hop dancers and traditional orchestral music lovers. That might have made networking almost impossible. But the huge tide of humanity that almost overwhelmed the 2017 NMD was also its triumph: a characteristic gift from London, European capital of creative curiosity and of the big crowd. 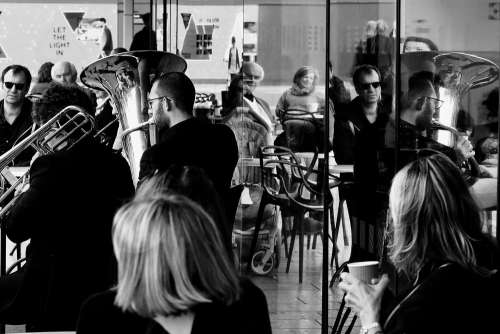 Those wandering visitors presented the Nordic contemporary music scene with a huge opportunity, which it seized. New art music is so often a closed circle. But the Swedes and the Londoners behind the 2017 festival conspired to deliver an event in which many thousands will have stumbled upon all manner of strange, wonderful and expectation-shifting music – from runic song to Sami joiks, from Anders Hillborg to Jarkko Hartikainen, from Madeleine Isaksson to Jean Sibelius. All of those mentioned were presented, ticketless, in the Royal Festival Hall’s main bar, ballroom or foyer areas that are populated constantly by passing visitors.

Sibelius as a contemporary

And so to Sibelius. Salonen’s performance of the Sixth and Seventh Symphonies at the opening concert was strong – literally. The Sixth was slower, thicker than we are used to and also relatively plain, spoken as if with an iron will. There wasn’t much of the rapture of Sibelius’s childhood in the Sixth nor was there serene wonderment in the Seventh. Salonen is a conductor who underlines the sense of strain in Sibelius’s music more than any sense of idyll, and there are some in Britain who find such emotional distance hard to take.

"Despite London’s frenetic din, the feeling that nature continues to inform the work of Nordic composers to an extraordinary degree was difficult to escape."

But in this context – the context of a festival of contemporary music – it was a good ploy to focus on structure and process, as Salonen’s performances did. It also meant we could hear these symphonies as a technical complement to the works that were played around them. Anna Thorvaldsdottir’s masterpiece Aeriality had the most magnetic and profound effect of all the music played, inducing a rare, extended silence in the cavernous Royal Festival Hall after its final notes had died away.

Daníel Bjarnason’s Violin Concerto is a more charming piece, with its scored-in whistling and elements of seduction halfway between shamanism and trickery. For all the concerto’s rhythmic fun and games and its sense of a groove, relished by Pekka Kuusisto for whose specific musicianship it was conceived, it is Bjarnason’s harmonic detail (including his use of microtones) that is most alluring and which makes me impatient to hear the piece again. 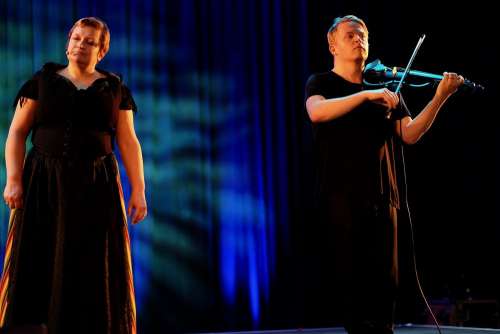 Kuusisto and Ilona Korhonen appeared on the Royal Festival Hall’s ballroom soon afterwards, bathed in luminous greens simulating the Northern Lights. Korhonen sang runic song to Kuusisto’s looped improvisations, by turns keening and percussive. Again, it was inestimably revealing to hear Korhonen’s singing in the context of music by Sibelius that the runic tradition so obviously shaped. But that relevance was somehow lost in translation. It might not have mattered to curious visitors, but it appeared to mystify London’s critical establishment.

Like it or not, Sibelius pervaded the festival due to the constant presence of the Philharmonia Orchestra’s Sibelius 360 installation, where visitors could “virtually” sit in Salonen’s Philharmonia Orchestra – right in front of the maestro, in fact – and experience the coruscating final pages of the Fifth Symphony from within. While the images were embracing and extraordinarily real (courtesy of 360-degree virtual reality headsets), the sound through the headphones didn’t have such impact. I wonder how many came away from Sibelius 360 having taken more from the visual experience than the musical one.

Either way, Salonen’s interpretation of the music once more underlined its sense of strain, his body language suggesting the natural inevitability of the music. “Perhaps it’s our proximity to nature – it’s right there, just by the cities,” said Anna Thorvaldsdottir in response to a questioning on the significance of nature to Nordic composers as she was interviewed on the ballroom stage. Despite London’s frenetic din, the feeling that nature continues to inform the work of Nordic composers to an extraordinary degree was difficult to escape.

Perhaps it wasn’t so much a feeling as a fact. Ansgar Beste’s In the steppes of Sámpi imagined a forest of joiks and animal noises building into a culminating hymn born, Sibelius-style, of its collective parts. We heard that piece from the exceptional vocal group Exaudi after all the animalistic ticks and shuffles of Pelle Gudmundsen-Holmgreen’s Song. Bára Gisladóttir’s Suzuki Baleno, performed the following day by The Riot Ensemble, took its lead from human exhalation. Bente Leiknes Thorsen’s With my ear to the ground, which we heard under the fingers of The Riot Ensemble’s pianist Adam Swayne, rhapsodized verbatim on the cries and squawks of the composer’s own infant children.

There was more. In Nordic Forests from the Manchester-based Distractfold Ensemble, we were taken deep into the woods. The bird sounds (real and violin-bound) of Tytti Arola’s Metsä were accompanied by jars of Swedish and Finnish forest material to tease the nose. But the most remarkable music in this concert was found in Johan Svensson’s ampèrian loops II, a rampant, hilarious stop-start scherzo that hardly dared make its noise, as if an orchestra of insects were playing it, huddled on the forest floor. Hanna Hartman’s Circling Blue suggested nature and technology aren’t so far apart after all, as it merged the sounds of a racing car with that of a woman’s singing voice until both became almost indistinct.

One idea, one vision

“This has been a beginning for us with Nordic music,” said artistic director of The Riot Ensemble Aaron Holloway-Nahum during a short break in the ensemble’s Floral Night Episode concert, describing how he and his players had become aware of "an idea, a unified vision in each piece and each composer."

The festival was not short of works to support his thesis. Nor would it be helpful to make a full list of all those that did. It’s enough to make special mention of the inherent tightness and clarity in Kaija Saariaho’s Terrestre and Adam Vilagi’s Flame, the latter drilling deep into a single idea and exceptionally performed by flautist Kate Walter, who worked as hard as any musician over the course of the event. 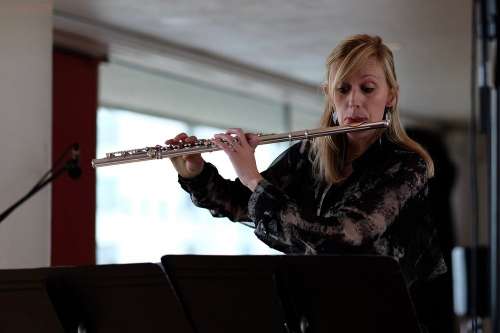 There was similar focus in all manner of works, by composers as varied as Bergrún Snæbjörnsdóttir, Per Nørgård, Djuro Zivkovic and more. But perhaps it was most obvious in Madeleine Isaksson’s Várije, where the vision in question was one of two elements meeting: the choirs of the Finchley Children’s Music Group and of the Krishna Avanti Primary School.

In the piece, which set a text in the southern Sami language (the title roughly translates as “towards the mountains”), the Finchley children skillfully negotiated the semitones of Isaksson’s main musical paragraphs while the Krishna group joiked in counterpoint, swinging their arms with their Sami mentors by their side. It was a simple enough piece with a straightforward binary design, sung in the Royal Festival Hall’s main bar amid the comings and goings of a Sunday morning. With Thorvaldsdottir’s Aeriality, although for entirely different reasons, it was probably the most resonant performance of the whole event.

More videos can be found here.