PREVIOUS ARTICLES FOLLOWING ARTICLES
Heikki Uimonen does not have a favourite sound. As an ethnomusicologist and a sound scholar, he is interested in all sounds. The more disturbing the better.

Everything in life can influence everything else, even a radio that is on all the time.

At the beginning, it was irritating. I was very annoyed to have to sit down at my day job for eight hours a day and listen to rock music and schlagers and so on.

That is from the foreword to the doctoral dissertation of ethnomusicologist Heikki Uimonen, 58, one of Finland’s leading soundscape scholars.

Uimonen was exposed to an overdose of radio while working at a library, before his university studies. Not that he was contemplating a career in academia at the time, but the seeds were planted:

“I began to wonder why anyone would play the same song six times a day. It’s just insane.”

One does not have to be a scientifically trained scholar to pay attention to the sounds in one’s environment, but for Uimonen his training helped him to find “keys to wondering at things”, albeit this was several years down the line.

“I began to study radio playlists and to interview people who work in commercial radio – why they play music, who chooses the songs, and so on.”

Uimonen’s book on the structural reform of commercial radio music, published in 2011, is only one entry in his extensive catalogue, which includes studies on music consumption, on the use of the compact cassette in home taping, and on soundscapes. Uimonen is currently working on two extensive projects: one that surveys the sonic culture of Finnish background music from the 1960s to the present, and another that is building a unique radio concept for Europe.

Uimonen’s academic career is ultimately founded on analytic listening, which he has been practising since he was a youngster. He played instruments at live gigs and in the studio, and before the Internet the only way to gain influences was to listen to mates playing and to records. His interests as a listener and music maker began to govern his thinking, and by the age of 30 he had ended up at the University of Tampere, studying ethnomusicology. It was there that he developed his special relationship with sound:

“That gave a turbo boost to analytic listening, because listening is an essential part of ethnomusicology studies.”

Uimonen had had passing encounters with soundscape research in the course of his studies, and when it came time for him to write his Master’s thesis, it was radio that once again played a vital if random role. Uimonen was working at a mail sorting centre during this studies – and one day the same song played for the third time during his shift.

Then it hit him: “This is my thesis topic.”

He ditched his previous topic, went out for a beer, scribbled his research plan on an A4 cardboard envelope and then hurried home to type it out on the computer.

“I never looked back.”

All the sounds of the world

After Uimonen had barrelled through his Master’s thesis, his teacher (now colleague) Helmi Järviluoma-Mäkelä asked the fresh graduate whether he would be interested in participating in a major project, assuming that funding could be obtained. This was a Finnish follow-up to the Five Village Soundscapes project, originally conducted by Canadian scholars in 1975. The idea was to chart the soundscapes of five European villages.

Although Uimonen had planned to do something different after his studies, this was an offer that was hard to refuse.

“I had just written my Master’s thesis and read through all those books with a fine-tooth comb, and I decided that this was a great and innovative area of research. Funding was uncertain, but not nearly as uncertain as it is today – the situation now is just disastrous.”

The funding came through, and “then we packed up our field equipment and set forth”.

The results may be seen and heard in the research group’s resulting study, Acoustic Environments in Change (2009).

Marriage of music and soundscapes

Soundscape research originated in Vancouver, Canada in the mid-1970s.

“The reason why soundscape research was born was that people usually only pay attention to sound when it becomes a problem,” Uimonen explains.

The purpose of soundscape research was to draw attention to aesthetically pleasing sound environments and to the ambiguity of ambient sounds. This is right up Uimonen’s street.

Cultural sound research always addresses the meanings and memories associated with sounds, how people use sounds in their lives and how sounds forge relationships with the environment.

This is a multi-discipline field that allows for various perspectives, such as a historical one. Uimonen’s research focuses on the relationship between music and the acoustic environment.

“One cannot exist without the other,” Uimonen summarises. His own music-making has taken a back seat to his academic career, though.

“When a person dies, all the knowledge they have of their soundscapes disappears. And since the sound environment around us is changing all the time, we are losing huge volumes of potential historical information.”

Soundscape research also addresses the multi-sensory relationship of humans to their environment. Some studies focus on what kind of sound information we are able and willing to receive and what means are used to influence our sensory experiences.

“A hearing individual receives auditory information on a 24-hour basis through their whole life. This allows for all kinds of research approaches,” says Uimonen.

One of the interests in soundscape research is how to systematically design a soundscape, e.g. through interior design and acoustics. For Uimonen, recording disappearing sound traditions is also essential these days.

It is important for both personal history and cultural history to store soundscapes and the stories related to them.

“When a person dies, all the knowledge they have of their soundscapes disappears. And since the sound environment around us is changing all the time, we are losing huge volumes of potential historical information.”

Out of the soundscape memories collected all around Finland, a broad spectrum of sounds emerged: mundane and festive, at work and at play, and relating to nature, safety, space, livelihood, agriculture, social functions, media, home, peace, landmarks and signals such as factory whistles and church bells. This is what the working group recorded.

“But a recorded sound or soundscape in itself is meaningless,” Uimonen points out. “A recording must be accompanied by an interpretation of the sound.” Accordingly, interviews with the persons suggesting the soundscapes were an essential part of the field work.

Between 2012 and 2019, Uimonen teamed with Helmi Järviluoma-Mäkelä and Jukka Mikkola on a programme named Äänien ilta [Evening of Sounds] for the Finnish Broadcasting Company (Yle). The format drew on the idea and ideals of the original soundscape research, and it had the effect of making ordinary citizens interested in the sounds in their environment.

“People would phone in and make requests about sounds of today and of yesterday, about sounds of tourism and technology, about frightening sounds, and so on. We would play their requests, like at a phone-in radio concert, and then discussed the experiences and meanings associated with those sounds.”

That radio programme formed a bridge to the currently ongoing multi-discipline, cross-genre and transnational project titled B-AIR Art Infinity Radio, which is financed by a three-year grant from the EU. It is a joint project European radio broadcasters, an artists’ collective and an university, and its purpose is to leverage public broadcasting and artists’ Internet radio activities to create a new kind of radio presence to revitalise sound-based creativity, communication and experimentation. The project also involves care institutions, from children’s hospitals to old people’s homes.

There are researchers from Serbia, Slovenia and France. The Finnish partner, with YLE, is the School of Humanities at the University of Eastern Finland. Uimonen and Professor Järviluoma-Mäkelä are building a concept translating their Äänien ilta programme to a European scale. There are plans for national programmes and for a shared European evening of sounds.

“First, there will be local broadcasts in Serbia and Slovenia, working towards a pan-European broadcast.”

It is a safe bet that Uimonen will not have to listen to the same hit song four times during that broadcast. 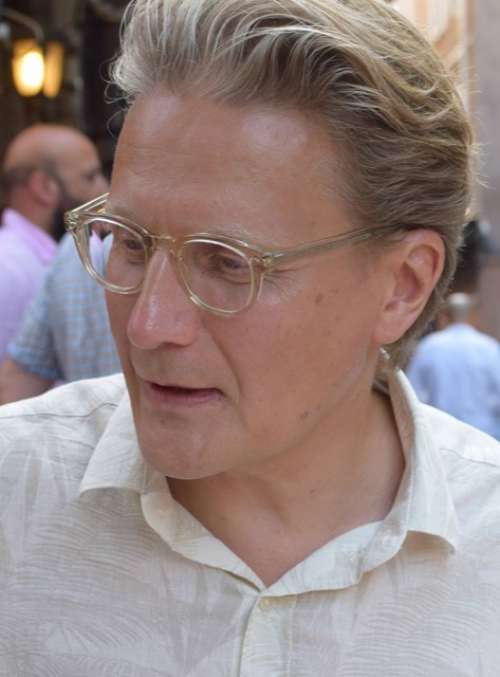 A wealth of material is a challenge for scholars. “Research into sound environments and music is firmly rooted in everyday life, which is a mixed blessing for a scholar. You can’t always leave your work behind when you close the door,” says Research Director Heikki Uimonen.
Photo: Meri Kytö