Microtonal classical music comes across as a nerdy pastime operating in the margins between "real notes," and with good reason. An experimental microtonal instrument is typically encircled by a close-knit community of musicians and composers who are unable to evangelise their discoveries because of difficulties in playing technique or other challenges. However, in recent years so many microtonal instruments have been developed and adopted in Finland that the colourful world between the notes is finally opening up to wider audiences.

At the Muziekgebouw in Amsterdam, a microtonal music matinee is held once a month, on Sunday morning. The hall has a Fokker organ with 31 pitches to the octave, and this has led to the emergence of what can only be described as a microtonal cluster. The organist at the Muziekgebouw, Ere Lievonen from Finland, thus has a captive audience who repeatedly come to enjoy the microtonal sound world.

“It’s a cosy atmosphere, the instrument is great and the hall is wonderful,” says composer Juhani Nuorvala exuberantly. Nuorvala, the most hard-core of all microtonal nerds in Finland, has just returned from the MicroFest in Amsterdam, and he can confirm that this marginal pursuit is making its way out of the margins at the international level.

“The hyperchromatic music of the 1920s, created by composers such as Hàba, Ives and Wyschnegradsky, found a continuation with the spectral composers. There is a strong tradition of just-intonation music in the USA, launched by Harry Partch. There is also a robust community of experimentation in dividing the octave into equal parts, not just 24 but other numbers too. In fact, equal-temperament quarter-tone music is in a something of a minority.”

Awareness of Baroque tuning systems is also increasing. Nuorvala stresses that microtonality as such is genre-free and pluralist and exists beyond the confines of modernist contemporary music. This is pretty much the case in Finland too.

Quarter-tones on a keyboard and in an app

In the spectral tonal-colour music of composer Sampo Haapamäki (b. 1979), quarter-tones are an essential tool. Haapamäki has often said that with the increasing interest in microtonality comes an increasing demand for quarter-tone instruments. Not content to merely talk about this, Haapamäki has taken concrete steps: he completed a design for a quarter-tone keyboard in collaboration with pianist Elisa Järvi D.Mus. in 2015, and the keyboard was built by carpenter and modelmaker Otso Haapamäki. 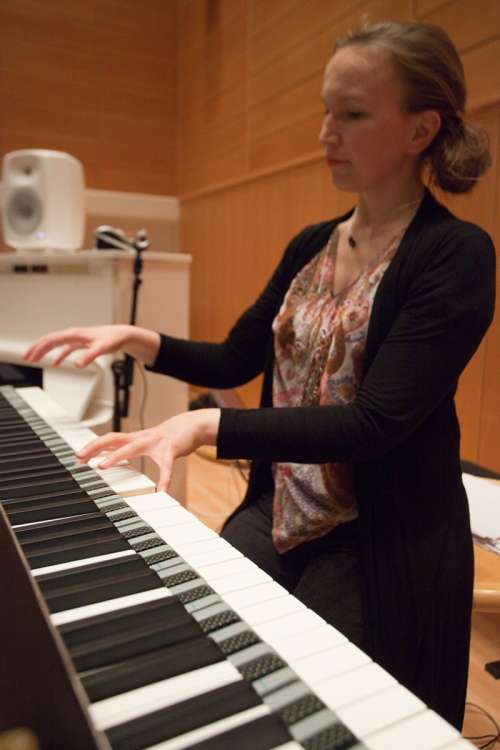 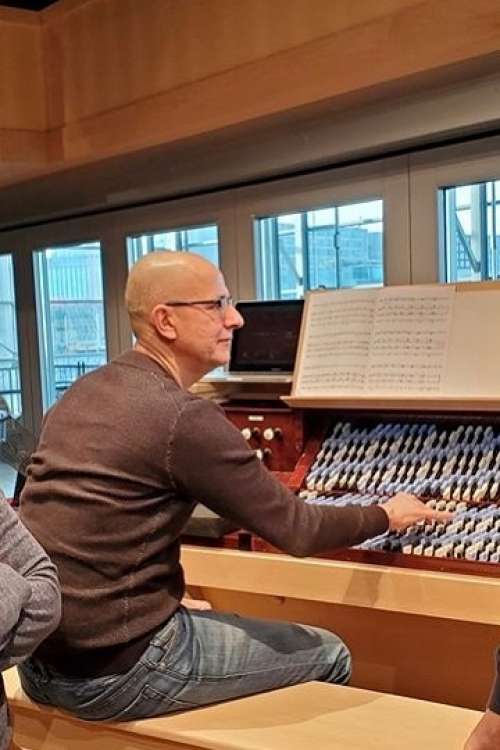 “The aim was to allow the performer to play microtonal chords and melodies with one hand and in an uncontrived way,” says Elisa Järvi. There were plenty of models to choose from, dating back as far as the 16th century, but the split key design of Baroque harpsichords is inadequate for coping with full-blown microtonality, and later experiments were based on the use of two grand pianos or two keyboards.

“Our innovation was to split white keys into front-white and back-white keys,” says Järvi. This has the advantage of retaining the logic – and largely the ergonomics – of the traditional piano keyboard regardless of the addition of a grey row of microtone keys.

“Even a beginner can immediately know where to find the microtones,” Järvi stresses. “What I’ve had to practice is positioning my hand and particularly anticipating the next sound.”

To make it easier for musicians to practice using the keyboard, Järvi is creating a smart device app and writing a post-doctoral article on playing technique. Yet Järvi has no illusions of creating a universally applicable microtonal keyboard standard, for the simple reason that music has been written and will continue to be written for customised keyboard designs that is only playable on those keyboards.

“There is probably no such thing as a perfect keyboard, but I see ours as the best compromise between playing technique and available pitches,” says Järvi.

On the other hand, as composer Juhani Nuorvala points out with a grin, there already exists an acoustic keyboard solution to the problem: the two-manual harpsichord, which can be nimbly tuned as required.

“I had no idea how easy it was before I tried it out myself. Tuning a piano is a huge task by comparison, and the sound of a modern piano is structured in such a way that if you detune an acoustic piano from equal temperament, it just sounds weird. What Haapamäki and Järvi have achieved is developing a practical keyboard layout onto which you can map any scale.”

For the moment, the brainchild of Järvi and Haapamäki only exists as a MIDI keyboard. Building an acoustic grand piano around the concept would be possible but monstrously expensive. The quarter-tone accordion, an earlier Finnish innovation, is more practical in that respect.

Composer and accordionist Veli Kujala realised in 2005 that the ten reed ranks in a concert accordion can be replaced with microtonally tuned ones. The playing technique is virtually the same, and the range remains almost as broad as before thanks to a few nifty tricks. The Pigini factory produced the required reed ranks, Tapio Peltola tuned them, and Kujala was ready to embark on hyperchromatic adventures. The best thing is that the reed ranks can be replaced without the help of an expert technician.

The downside is that because there are now many more pitches than before, their locations have to be relearned, which is a laborious process. Because of this, Kujala is virtually the only one using this innovative instrument. Fortunately, he is a dazzling virtuoso and an accomplished composer, and his quarter-tone accordion is well on the way to fostering an international composing tradition of its own.

The most usable microtonal instruments are those whose playing technique remains intuitive despite the added notes. The microtonal guitar is a case in point.

“About five years ago, I attended a course on microtonal chamber music in Germany, and I immediately knew that this was the path I had to take,” says guitarist Petri Kumela. “Microtonality is like blue cheese: an acquired taste that can develop into a passion.”

Juuso Nieminen has played a lot of music on a quarter-tone guitar built by Keijo Korelin, but Kumela tried another approach.

“The quarter-tone guitar has so many frets that there is no room for the strings to vibrate properly. The sonority is not very good.” 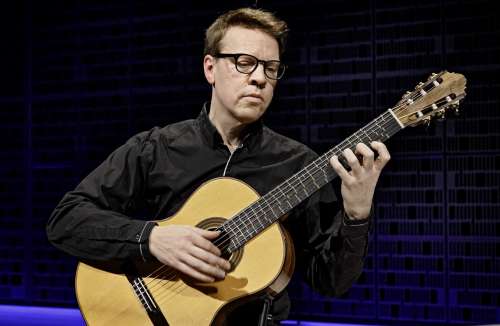 On Petri Kumela's guitar, the frets can be installed on the neck on an as-needed basis.
Photo: Heikki Tuuli

Kumela settled on commissioning a microtonal neck from Matthias Grohn in Berlin for his old concert guitar. Here, frets can be installed on the neck on an as-needed basis, and they can be shifted using an awl.

“I didn’t have to relearn my playing technique. If you use a tuning that requires a lot of frets, the sharp edges cut into your left hand, but you get used to that,” says Kumela, going on to point out that the instrument has two dimensions.

“You can play on all kinds of crazy modern tunings with it, but what is important for me is to explore the mean-tone tuning and other temperaments used in early music. I perform a lot of early music with soprano Tuuli Lindeberg, and her intonation is so superb that it is great to be able to match it with this instrument.”

Kumela says that old polyphonic music sounds better on a well-tempered microtonal guitar, because there is less beating in consonant intervals. More surprisingly, the instrument can actually be tuned to equal temperament better than a conventional guitar, because string thickness can be compensated for with fret placement. This, then, is truly about genre-free microtonality.

“There are a lot of mathematically gifted people with a penchant for formulas in the secret societies of microtonal contemporary music, but this instrument communicates very closely with early music, and that provides a balance,” says Kumela.

“Sure, there’s a certain nerdiness to all this,” clarinettist Lauri Sallinen admits. He is the artistic director of the seven-member MikroEnsemble, established in 2015.

“I play all kinds of music, and the microtonal realm really stands out, because the science and theory dimension is much stronger there,” says Sallinen.

For Sallinen, the motivation to explore microtonal music is clear: “In every work that we’ve performed, we’ve had to come up with new ways of executing the near-impossible. That is interesting.” 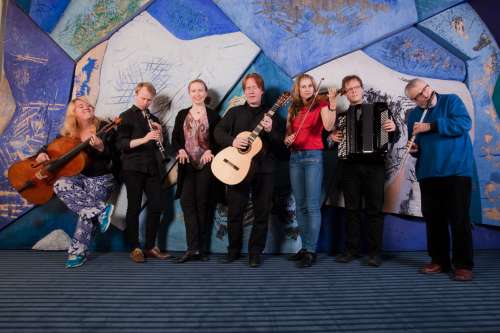 Being a clarinettist, Sallinen has no acute need to invent new instrument designs to resolve these near-impossible issues: “In microtonal pieces, every clarinettist comes up with new fingerings according to how their hands work and what the demands of the music are, or simply correct the intonation using their embouchure.

“Then again... woodwind technician Mikko Rousku and myself are developing a microtonal added mechanism for a key in the lower register, and at home I have this mouthpiece that was developed by technicians at IRCAM a long time ago: when you press a pedal, the mouthpiece dilates and the pitch goes down...”

“When a fully developed instrument such as the Fokker organ or the quarter-tone accordion appears on the scene, people are excited to write music for that particular instrument,” says Juhani Nuorvala. “It’s different in electronic music: you just have to invent a tuning system, and then it’s easy to produce the required pitches on electronic instruments.”

Nuorvala is not expecting an avalanche of instrumental innovations in acoustic classical music, even if microtonality is becoming more widespread in contemporary works:

“I would imagine that performing such music could be simplified in the future just by making small modifications to conventional orchestral instruments.”

The rest can be left to progress in general musicianship, which tends to follow pioneering activities with a slight delay.

“Today, Sampo Haapamäki can expect orchestras to reproduce the microtonal things in his orchestral works without question, and the result does sound credible, at least when played by Finnish orchestras,” says Nuorvala.

“I’ve been so bold as to write a quarter-tone melody for strings in unison, and that turned out fine, but then again the performers were the Ostrobothnian Chamber Orchestra.” 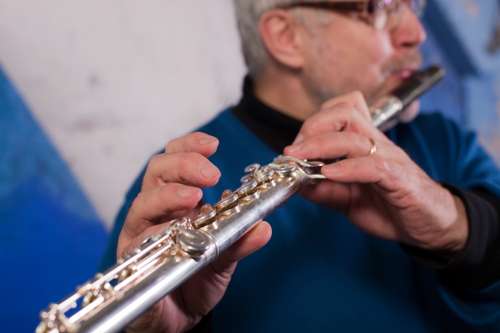