PREVIOUS ARTICLES FOLLOWING ARTICLES
Although many festivals and performing organisations have shown extraordinary creativity in programming contemporary music, demonstrating, at best, genuine interest in diversity and innovation, especially during the pandemic, one perennial question still remains largely unanswered; what to do with late-night shows?

Classical and contemporary concerts tend to take place somewhere between lunch-hours and nine pm. For many years, the promoters have been keen on presenting various permutations of late-night programming, with varying success. Some organisations, such as the Berlin Philharmonic, have chosen to simply put on hour-long in-hall events following the concert proper, focusing on new and unusual repertoire. Others, like the Royal Concertgebouw orchestra, have come up with club settings, featuring music for small, sometimes more or less unconventional ensembles.

With late-night events, the balance between artistic integrity and marketability has occasionally been somewhat challenging, and understandably so. Devising programmes where accessibility and ambition meet, without pushing the audiences too far out of their comfort zones, is not an easy task to fulfil. More often than not, compromises have been made, one way or another.

The 2022 rendition of Tampere Biennale presented its audiences with four late-night programmes, three of them dubbed as club nights in the festival agenda. The fourth, a late-night appearance by Electric Guitar Quartet, was fashioned, more or less, in the manner of a traditional concert setup.

There were two venues involved, G Livelab Tampere and Telakka, both versatile presenters of live events. Sometimes, it may just be enough to take the music out of the traditional concert hall, in order to break free from the ritualistic scheme of a classical music performance. Whether or not this is necessary is, of course, whole another matter. Be it as it may, it should be noted that there are some excellent examples of concerts in alternative venues from the pandemic days, including the Lahti Symphony performing new music at the Forest Hall of their Sibelius Hall home or Anu Komsi and Pia Värri premiering Kaija Saariaho at the Helsinki Music Centre foyer. 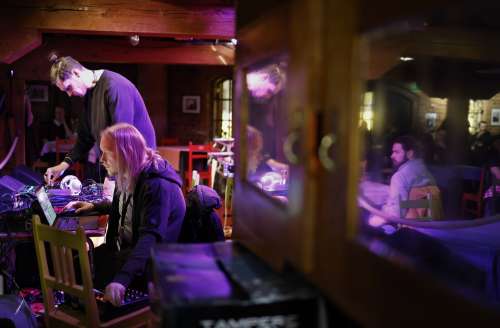 However, in the case of Tampere Biennale, alternative venues were combined with alternative programming, which, interestingly, often comes down to ensembles with non-classical instrumentation and amplification, while the musical substance itself may appear fairly conventional, at least in the context of a contemporary music festival.

The Biennale’s first Festival Club at Telakka brought together two rather different aspects of electronica, in the guise of a joint gig by the improvisational ambient drone duo HLER alongside 8 Bits High, a trio producing music using only Commodore 64 home computers as sound sources. Perhaps the most organically alternative late-night programme, the electronica evening was rooted in a solid musical idea, even though the actual outcome was somewhat uneven.

In a night-club setting, the extended improvisations of HLER, often based on minutiae variations in soundscapes generated on Atomosynth Mochika XL synthesiser, came off as challenging oddballs. Not a sell-out for sure, but neither the most audience-friendly opener either; a slight mismatch between the music and the venue, perhaps. In a different setting, things might have worked out more in favour of the music.

In contrast, the appealingly ingenious (and danceable), raw electronica of 8 Bits High seemed to be tailor-made to the occasion, at least by judging the audience reactions. A poly-stylist playlist, fusing together several rave idioms, with cross-references to the Commodore 64 era musical canon, the trio’s performance landed beautifully between the experimental and the casual, befittingly for a new music festival club.

The second club evening at Telakka, consisting of two sets performed by the duo Nieminen & Litmanen, ventured into the realm of Hammond organ and drums, with stylistic agenda encompassing multitude of genres, from blues and jazz to schlager and pop. While certainly entertaining, with innovative sonics and witty playfulness, one is bound to ask, whether or not this was an event specifically related to the Biennale’s core agenda. 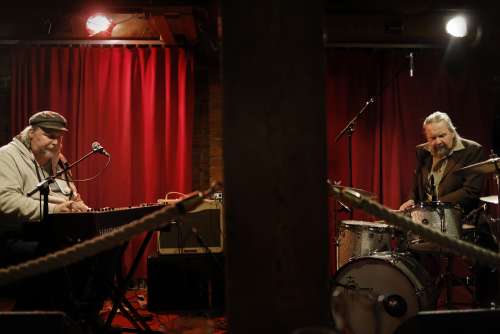 From here arises the complex question concerning the very nature and definition of contemporary music, which in itself is, obviously, quite vague a concept. While there is no question about the musicality and ingeniousness of the Nieminen & Litmanen performance, it must be said, in all honesty, that the evening had little to do with the common perception of what is considered to be contemporary music. Whether this is a problem or not, is probably best left for everyone to decide for themselves.

The final club event of the festival, a Game Music Collective gig at G Livelab Tampere, focused on video game music, a contemporary offshoot to the so-called ”serious” music; a dubious distinction in itself. Coming in the heels of the re-evaluation of the artistic merits of film music over the past decades, game music is gradually gaining more and more presentable status in concert settings, and deservedly so.

Like any sonic medium, game music can be divided to several sub-genres, some more akin to popular music, others aligning with more experimental styles. In concertante setups, one mostly hears theme music adaptations, much in the manner of opera overtures played in classical concerts. The skilful septet arrangements by Game Music Collective salute the originals with flying colours, celebrating the uplifting art of contemporary game music composition.

In the end, it may very well be that the success of late-night concerts may not be tied to any specific musical genre, but to the organicity of the continuum between the sounding material and the overall ambience of the venue. Sometimes, having drinks served in the hall might just do the trick in terms of accessibility. On a deeper level, the interconnectedness between programme proper and late-light playlists calls forth much more intricate artistic vision from the presenters, in order to reach beyond mere entertainment.