This year, the Musica nova Helsinki 2019 festival presented a trans-Atlantic menu. The programme plumbed deep waters and explored lovely landscapes on a sea that knows no bounds. All this begs the question: are we driftwood, or are we actively charting a course to the future?

Ten days, 33 events, more than 70 composers, a hundred or so works, 10 world premieres. Once again, Musica nova Helsinki managed to serve up a crash course in what is going on in contemporary music, led by artistic director André de Ridder.

One of the scarlet threads in this year’s festival programme was ‘trans-Atlantic dialogue’, which manifested itself in the highlighting of composers from the USA, Canada, Iceland and Ireland. There were also several contemporary works written for period instruments and works with the electric guitar in a central role. Guest ensembles lent an added colour to the festival: Crash Ensemble from Ireland, Ensemble U from Estonia and Ensemble intercontemporain and La Chambre aux éxchos from France.

Perhaps it was because of this surfeit of themes that Musica nova did not have a single stated thematic headline or composer focus – for the first time in more than 20 years. Instead, the repertoire choices made by de Ridder and the festival concert organisers came across as a tapestry of multiple threads, each one of which the listener might choose to follow. Navigational difficulties apart, the upside of this athematic approach was that it set free the generation of connections and associations in the listener’s mind.

Facing the forces of nature

The opening concert given by the Helsinki Philharmonic Orchestra presented up front the aesthetic points that subsequently became very familiar in the course of the week. The concert began with Metacosmos by Anna Thorvaldsdottir, a monumentally beautiful but melancholic almost cinematic piece that seemed to underscore how powerless humans are in the face of forces of nature. The concluding work, Delta – Music for Orchestra IV by Jay Schwartz, by contrast, was an austere and powerful piece that sounded almost post-apocalyptic in its gradual but powerful metamorphosis. As the composer noted at the concert, the shape of the work resembles a glacier melting into the ocean.

These were not the only works to contemplate forces greater than mankind. Natural forces and the insignificance of the individual dominated many of the post-minimalist works performed. A case in point is Resonance Orbits by Matthew Whittall, performed by Crash Ensemble, which was inspired literally by planetary forces, specifically the resonances of the orbits of the seven planets in the TRAPPIST-1 system.

The most concrete manifestation of contemplating nature emerged in the two virtual reality concerts given by Ensemble U from Estonia. Listeners were immersed in a combination of landscapes and live chamber music through the use of VR goggles. Experiencing the subtle and beautiful music in this way – I attended the concert with music by Liisa Hirsch and Märt-Matis Lill – prompted questions about the relationship of music and nature.

Yet for all the natural forces and landscapes exuded by many of the works performed at the festival concerts, the environmental theme was not explicitly mentioned very many times during the week, and the relationship between humankind and nature was portrayed as quite passive. Apart from Schwartz, the only work to actively comment on climate change was Sirri by Minna Leinonen, premiered by Mikko Perkola and Uusinta Ensemble. The interaction between the viol soloist and the orchestra reflected the furious struggle of a dying species. 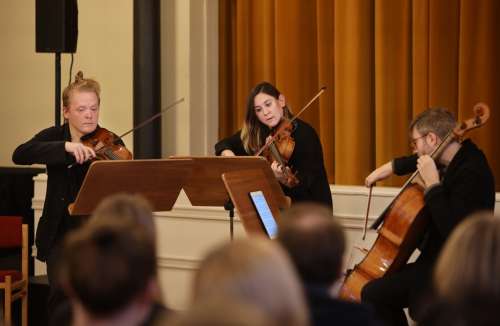 Musica nova featured composers and performers from various countries, but what was striking was how few of them could be unambiguously said to come from one specific continent: many of them divided their time on either side of the Atlantic Ocean, or had done so in the past. The generation of composers and musicians featured the most prominently in the programming, now in their forties, grew up with a disregard for national or genre boundaries, and networks among them are rooted in collaboration rather than geography.

A good example of these networks is Bedroom Community, an Icelandic collective and record label that brings together like-minded musicians from around the world. Many of the performers featured at Musica nova this year are members of this network, such as Daníel Bjarnason, Nadia Sirota, Nico Muhly and Crash Ensemble. Pekka Kuusisto, who appeared with Sirota and gave an inspired performance of Bjarnason’s Violin Concerto at the festival, came across as a soul-mate of the collective.

An interesting comparison of what crossing the Atlantic meant for different generations was provided by two concerts focusing on American music on the first Sunday of the festival: the recital given by Trio Kuusisto-Sirota-Hohti featured American composers Missy Mazzoli and Bryce Dessner, while Crash Ensemble performed works by the founding members of the ‘Bang on a can’ collective (founded in 1987), David Lang, Julia Wolfe and Michael Gordon. Although the legacy of minimalism lives on in the music of both these generations, it appeared as edgy and playful with Lang, Wolfe and Gordon but as much more flexible and moody in the post-minimalism of the Kuusisto-Sirota-Hohti programme. 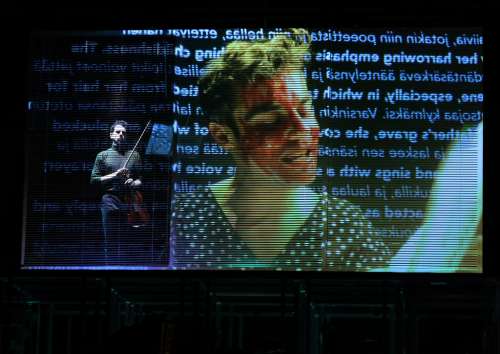 A look at the views

For myself, one of the most powerful experiences of the festival was a double bill produced by the Finnish National Opera and Ballet, Violences, featuring music theatre company La Chambre aux échos from France. This production combined the music for Katharina Blum by Hans Werner Henze and Ophelia/Tiefsee by Juha T. Koskinen into a single dramaturgical arc. Directed by Aleksi Barrière, this intense and compelling combination of music and drama addressed the roles of women in the arts and culture, with specific reference to manifestations of the character of Ophelia in Shakespeare.

Visual elements were present in force at Musica nova. Videos were included as a musical element in several works, such as the premiered works by Sam Perkin and Antti Auvinen. Visual art was also explored in the eagerly awaited world premiere production of the opera Flash Flash by Juhani Nuorvala and Juha Siltanen, reflecting on the life of Andy Warhol. This landmark production was exceptionally long in the making, and its misfortunes continued, as after the first night the entire run was cancelled due to illness. Because of this I did not witness it myself. 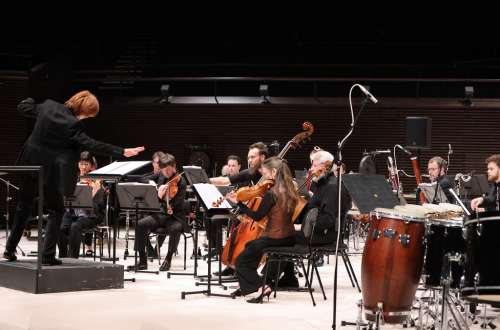 Feet back on the ground

For all that the programming of Musica nova was diverse, it was dominated by calm, expansive, landscape-like music. It was so easy to go with the flow and wallow in the depths that one did not really notice it until something completely different appeared on the programme. The concert given by Ensemble intercontemporain on Saturday night began with Cadenza no. 1 by Bruno Mantovani, a bright, scintillating virtuoso work firmly rooted in European modernism. Its clarity and precision felt like having one’s feet back on the ground after a long though impressive voyage by sea and travelling on a road towards a bustling city.

The festival concluded with a concert given by Avanti!, where the very last work was Black Midi by Canadian composer Nicole Lizée, combining music and video in an exploration of the relationship of analogue and digital. This was a welcome reminder of the more experimental facet of the festival, with its gaze firmly on the future. It also reminded listeners of the power of art as critical commentary. What could the world be like? What could we do about it?

Translation: Jaakko Mäntyjärvi
Featured photo by Maarit Kytöharju: Audience with VR glasses at the concert of Ensemble U.