This year marks the centenary of the Finnish Civil War. My Brother’s Keeper, a new opera by Olli Kortekangas, focuses on the tragic wartime events in Tampere.

For decades, the Civil War has been a taboo subject in Finland, its history largely written by the victors, the Whites. However, in recent years voice has also been given to the perspective of the Reds.

In December 1917 Finland declared itself independent from Russia, which had fallen into chaos following the October Revolution. Soon, however, resentments that had festered silently in Finnish society burst out into the open, and the newly independent nation plunged into a Civil War in early 1918. Its two sides were the Reds and the Whites, the working class and the bourgeoisie.

The epicentre of Red territory was Tampere, and it is there that Olli Kortekangas’s most recent opera is set. My Brother’s Keeper, an opera in four acts, is a story of this painful and tragic event that is a sore spot for many Finns even today. The opera features both sides of the conflict in equal measure.

Kortekangas is a history buff, and he notes that the topic of this opera has been favourably received. “I imagined that people would respond with ‘why rake up old things’, but I was wrong. The positive response to this opera is a good example of the interest that Finns have for history and for their background, whatever their generation,” says Kortekangas. 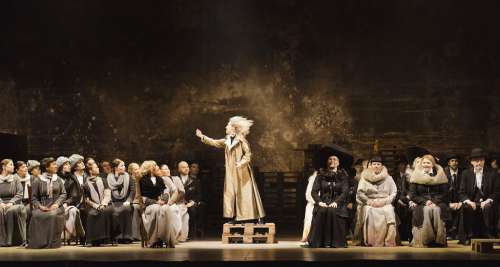 Who takes up arms and why?

My Brother’s Keeper was commissioned by the Tampere Opera, which has staged impressive productions in recent years. Kortekangas notes that they specifically wanted to commission an opera about the Civil War, with specific reference to how it played out in Tampere.

Yet although My Brother’s Keeper features a political event, Kortekangas says it is not a political statement.

“The creative team has absolutely no axe to grind as to who was more in the right in Tampere in 1918, the Reds or the Whites. The audience should also have the right not to be spoon-fed what is right and what is wrong. We cannot require that the opera must be understood in any one specific way,” says Kortekangas.

The composer’s interest in the subject was enhanced by the fact that the Civil War is still not forgotten, a hundred years on.

“One of the first things I discovered was that the Civil War affected and continues to affect many people and that family stories about those events are still being told. I also understood that there is an astonishing amount of bitterness and trauma lingering from the Civil War even today,” notes Kortekangas.

“There are diverse and contradictory reports of the events of the Civil War, and there is no accepted national narrative of its progress,” he says.

The action in the opera is set off by a situation where the daughter and son of a pacifist father end up on opposite sides of the front. The composer compares My Brother’s Keeper with a Greek tragedy and its terrifying symmetry.

“The culmination of the opera comes when the father tells his son that if he takes up the sword he will die by the sword. Yet the father is obliged to take up arms when leading people out of the line of fire, and at the moment he grabs a gun, he is shot. By his own son,” says Kortekangas.

Although the action of the opera is firmly set in 1918, the composer hopes that it will have universal relevance too in its treatment of themes of parenthood, siblinghood, family and community. It also addresses the difficulty of coexistence in a human community. “Mercy and forgiveness are very much to the fore in this opera. Although I am sure that there were many men and women with deep convictions on both sides in the Civil War, there were also a lot of people who went to war impulsively, ignorantly and randomly. I have often marvelled at how easy it is for us to be wise after the fact rather than think about whether we ourselves could have taken up arms under those circumstances, what it would have required for us to do so and what we would have been prepared to do. News and research in our time show just how quickly an ostensibly normal person can become radicalised if guided or forced by circumstances. Let us not judge, lest we be judged.”

The duet of Amanda and Eemil, performed in a concert on 26 January 2018.

Opera projects are long and arduous, easily taking years from start to finish. Kortekangas enjoys writing for soloists he already knows, such as baritone Juha Kotilainen and soprano Päivi Nisula in this production. Kortekangas was also previously familiar with baritones Ville Rusanen and Tuomas Pursio.

“Tuomas Katajala, who has a unique tenor voice, was in my mind from the start when I wrote the character of Iisakki Friman, who is rather a unique and whimsical character too,” says Kortekangas. “There are also young singers who are making their first appearance in an opera of mine, such as soprano Tuuli Takala and mezzosoprano Erica Back, a recent graduate of the opera department at the Sibelius Academy.”

The libretto for My Brother’s Keeper was written By Tuomas Parkkinen (see the FMQ article on the Tom of Finland musical). This is Kortekangas’s first collaboration with him. Parkkinen also directed the production.

“We were both first contacted by the people in Tampere back in 2008. We talked about it for five years, matching our work processes and ideas about opera, and arguing too, of course. Instead of settling for boring compromises, we always went for one of two opposite opinions, and established the broad outlines by consensus,” says Kortekangas. “I am very happy with my collaboration with Parkkinen. I usually ask my librettists right at the start: is it all right if the libretto will be finished when the opera is finished? In an opera project, the text is usually created first, yet the music takes pride of place. This is an interesting and sometimes difficult premise. Parkkinen accepted this, and in return I sought to extract everything from his wonderful text that could feed my musical imagination.” 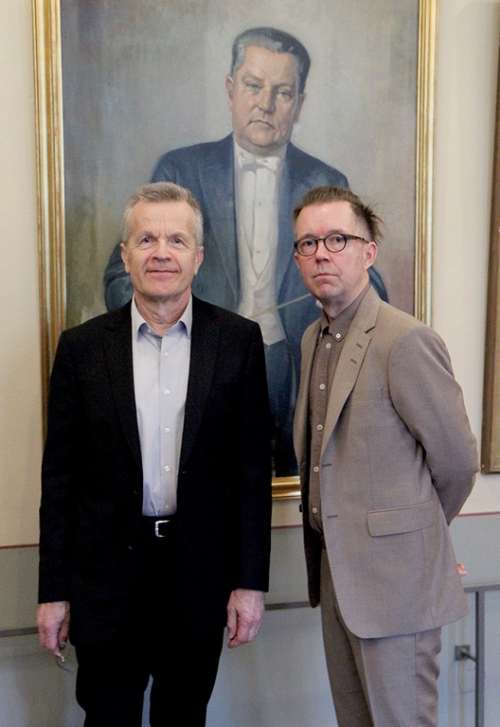 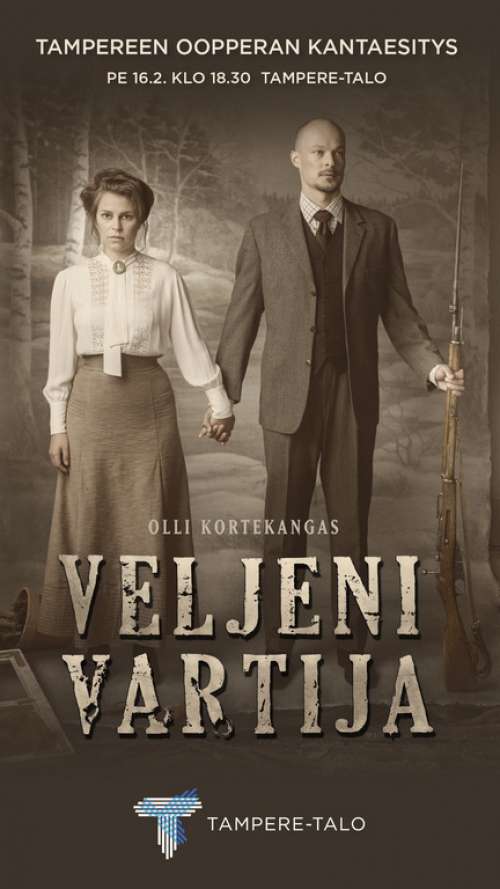 Kortekangas has a recognisable musical idiom that is nevertheless different in each work. In his previous opera on a historical subject, Daddy’s Girl (See the article here), he employed stylistic allusions, and My Brother’s Keeper has its share of these too.

“The music in this opera is based on a handful of simple harmonic ideas and melodic motifs, which I used to create a unique idiom for each character. On the other hand, I aimed for a broad palette of nuances on the surface level; at my age, you can afford to let yourself go a bit! The epoch is evoked through stylised references such as cakewalk, brass bands and battle songs, but there is also a late Romantic glow in evidence. I consider My Brother’s Keeper as a hybrid between a tone poem and a number opera,” Kortekangas explains. “Writing an opera is a gigantic effort. Every time I say never again, but the next day I find myself making new plans,” he says with amusement.

War is a recurring theme in Finnish opera 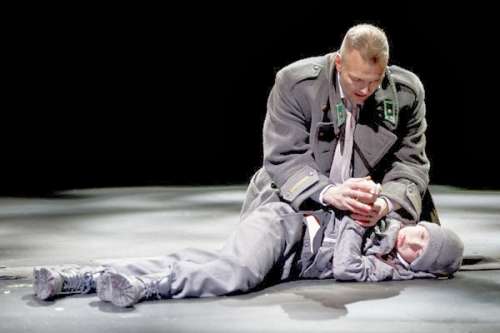 Tauno Pylkkänen's The Unknown Soldier was performed in Oulu in 2014. Photo: Jussi Tuokkola.

The year 2018 marks the centenary of the Finnish Civil War, and true to form there are several new operas dealing with that event. In addition to Veljeni vartija (My Brother’s Keeper) by Olli Kortekangas, premiered in February 2018, the Civil War makes an appearance at least as a framework in two works featuring composer Toivo Kuula: Sampsa Ertamo’s Toivo Kuula, to be premiered in summer 2018; and Jorma Panula’s earlier opera Toivo Kuula – keskeneräinen sinfonia (Toivo Kuula – unfinished symphony, 2006). The church opera 1918 Vilppulan vaihe (1918 Vilppula campaign, 2012) by Paavo Joensalo is also about the Civil War, as is the melodrama Metsäkansan laulu (Song of the woodland people) by Leif Segerstam, to be premiered in spring 2018. The Civil War is further touched upon in Isontaloon Antti (2000) by Atso Almila, the tale of a Jaeger from Ostrobothnia named Antti Isotalo in the 1910s.

The Winter War is the most frequently featured war in Finnish opera. In the opera Paavo Suuri. Suuri Juoksu. Suuri Uni (Paavo the Great. Great Race. Great Dream, 2000) by Tuomas Kantelinen, the life of legendary long-distance runner Paavo Nurmi is overshadowed by both the Civil War and the Winter War. Rakkaimpani (My dearest, 2007) by Seppo Pohjola is based on correspondence between his grandparents during the Winter War. Sotajoulukuu (War December, 2014) by Markus Fagerudd is a children’s opera where Finnish and Russian soldiers meet during the Winter War. Sillanpään marssilaulu (Sillanpää’s marching song, 2009) to a libretto by Panu Rajala highlights the importance during the Winter War of the popular marching song featured in the title, with lyrics by Nobel prizewinning author Frans Emil Sillanpää. Rajala also wrote the libretto for Ilkka Kuusisto’s ‘Winter War opera’ Taipaleenjoki (Taipale River, 2010), which features two poets who actually saw combat on opposite sides of the front, Yrjö Jylhä and Evgeny Dolmatovsky.

The The most famous description of war in Finnish literature, Tuntematon sotilas (The Unknown Soldier) by Väinö Linna, a novel about Finnish soldiers in the Continuation War, was adapted by Tauno Pylkkänen into an opera that was premiered in 1967.

The consequences of war have also found expression in opera. Harrbådan neito (Maiden of Harrbåda, 2015) by Seppo Pohjola is set in the period after the Continuation War and touches on what is known as the Weapons Cache Case, when activists hid weapons that had been declared illegal after the war, as a safeguard in case of a feared Soviet invasion. Culpability for war crimes is addressed in Vapauden vanki. Ryti, Risto nro 236/46 (Ryti, Risto nro 236/46 – Prisoner of Freedom, 2007) by Ilkka Kuusisto, where wartime President Risto Ryti, convicted for treason, reminisces about his life and about his political decisions in the Winter War and Continuation War while serving his prison sentence. Porkkala-ooppera (Porkkala opera, 2006) by Annukka Ahola is set during the 12 years when the Soviet Union operated a military base at Porkkala, on territory that Finland was forced to lease to the Soviet government in 1944.