In 2016, the Turku City Theatre announced that Tom of Finland, The Musical would be an official part of the centennial celebration year of Finnish independence. The premise of the play was quite radical for a Finnish original musical: the life of Touko Laaksonen, whose explicitly sexual art emerged from underground gay culture into mainstream consumerism. The musical depicts Laaksonen’s artistic success while also addressing the painful history of homosexuals in Finland and celebrating difference, acceptance, love and sex.

In this article, I discuss the process of staging the production of Tom of Finland, The Musical from its early drafts to the final staged production. As part of my research, I interviewed composers Jussi Vahvaselkä and Jori Sjöroos, writer/lyricist Tuomas Parkkinen and director/choreographer Reija Wäre about the process of writing and directing the musical as well as the priorities of the production teams when working on the musical itself. I also discuss the music and the reception of the musical in the climate of Finland’s independence year, where tolerant and intolerant viewpoints are at loggerheads with each other.

Jori Sjöroos is one of the most prominent composers of popular music in Finland, and Jussi Vahvaselkä is the active conductor and composer of the Turku City Theatre. Sjöroos found the process of writing a stage musical an exciting challenge, despite the doubts of music critics: “Someone asked me what it feels like to ‘slum it’ in writing theatre music. I thought that was ridiculous on so many levels. This was an important piece we were working on.”

Both Sjöroos and Vahvaselkä describe the process of composing the music as symbiotic. They met up in Sjöroos’s office in the city center of Turku, sat next to two pianos and started to bounce ideas off each other, based on Parkkinen’s sketch of the musical plotline, which for a long time was the only document the crew had to work with. Vahvaselkä remembers how the writing process seemed so effortless that the music itself started to reflect this apparent ease: “At one point, we noticed that all of our songs are in major keys. That was just how it happened: we wanted to depict the joy of Touko’s drawings through our music.”

Tuomas Parkkinen is a prominent director and writer in the field of Finnish opera and musical who embraces expansive themes, often through comedy and satire. His librettos include the opera Veljeni vartija (My Brother’s Keeper) about the Finnish Civil War of 1918. The opera was composed by Olli Kortekangas and will be premiered in February 2018.

Parkkinen describes the process of the musical’s libretto writing as “slow and stubbornly self-reliant”.

After finishing the sketch and sharing it with the crew, it took a while for him to complete the final manuscript. Parkkinen’s mission was not only to celebrate Touko’s life and art but also to write a counter-history of Finland during the Continuation War of 1941–44 and beyond. Motivated by this, Parkkinen looked into academic historical research on homosexuality in Finland and was determined to bring this story onto the stage as a backdrop to Laaksonen’s life story.

Director and choreographer Reija Wäre is one of the foremost choreographers in Finland and has worked with popular music artists such as Antti Tuisku and Krista Sigfrids. She notes that the Turku City Theatre received complaints even before the musical was premiered, as the production included child actors and it was presumed that the musical’s topic would not be suitable for children. The creative team was kept unaware of this criticism, and the premiere went ahead as planned (albeit with an age limit of 16) on 27 January 2017.

Highlights of the musical, including the song Glad to be Gay by Sjöroos-Vahvaselkä-Parkkinen:

Tom of Finland, The Musical sheds new light on Finnish history, breaking the stereotype of Finnishness as a monolithic category by depicting history from the perspective of a sexual minority. Instead of perseverance (sisu), a Finnish ideal most comparable to the concept of ‘gritting your teeth’, we see wartime people, heterosexual and homosexual alike, turning to carnal pleasures as if every moment could be their last.

The musical additionally brings Finnish homophobia to the stage by showing officials battering homosexuals in public parks. Compared to other Nordic countries, Finland has had a more challenging relationship with its LGBT minorities. While Sweden, Denmark and Iceland, for example, started to discuss gay rights as early as in the 1930s, efforts in this discussion in Finland gave way to more challenging political issues. After the Civil War of 1918, the rift between Communists and extreme right-wing factions grew to a level of paranoia in the 1930s that left little room for discussion about gay rights. Homosexuality was considered a criminal act punishable by two years in prison until 1971 and was classified as a mental illness until 1981.The age of consent in homosexuality was set at 15, the same as for heterosexuals, as late as in 1999, and the Equal Marriage Act passed in Finland in 2017. The musical traces the history of Finland’s LGBT community and its gradual acceptance through Touko Laaksonen’s life and especially his art.

The music composed for the musical follows a certain pattern; it makes chronological allusions to Finnish popular music as the decades pass – deliberately, as Vahvaselkä and Sjöroos admit. More than this, the musical manages to poke fun at Finnish music genres while also paying homage to them.

For example, wartime Finland is represented through the tango, one of the most popular Finnish popular music genres of the time, but reframing the musical genre to exhibit qualities that the Finnish tango is not accustomed to portraying. Traditionally, the Finnish tango depicts melancholy and escapism above all else. While most tangos focus on more emotional and romantic forms of courtship, sex and sexuality are usually not explicitly expressed. The tangos in the musical are somewhat different. While the music is notably ‘Finnish’ in its use of Slavic melodies and minor-scale harmonies, the emotional content depicts not escapism but living in the moment; not romantic love but pleasures of the flesh, and illicit nocturnal sexual escapades.

This is perhaps best accomplished by combining the talents of a popular music composer (Sjöroos) and a theatre music and orchestration expert (Vahvaselkä). Secondly, the musical depiction of sexual encounters happens not only between men and men, but instead becomes a kind of pansexual courtship, with pairings of any description dancing to the same choreography. Given that tango is traditionally a highly heteronormative genre (featuring almost exclusively pairings of man and woman), the choreography of the tango in this context is novel. Director and choreographer Reija Wäre describes the choreography thus:

“There were three people onstage: a queer woman, a homosexual man and a heterosexual man. We went through the choreography gesture by gesture, asking at each moment what they mean to everyone involved, and we removed gestures that depict vulnerability or frilliness; in this way, the choreography became more democratic, more sensual; danceable for many gender pairings without essentialising powerlessness to anyone.”

The tango number queers Finnish tango in many ways: this tango promotes spontaneity, bodily pleasures and joy in a gender-democratic space. Finnishness and queer eroticism are not separated from each other, but are entwined in a novel embrace. Perhaps the scene also metatextually depicts the more progressive attitude towards sexuality that is emerging in contemporary Finland.

Towards new counter-narratives of Finnish history

Art historian Harri Kalha has read the artwork of Tom of Finland as both a source of pride for homosexuals, but also as representing the shame that is inextricably attached to gay cultures. Kalha argues that shame is necessary in order for Tom’s drawings to be regarded as liberating and expressing pride: there can be no liberation without the chains that precede it. Pride and shame coexist.

On the other hand, the musical’s lack of shame has been seen by critics as its fundamental flaw. Are we talking about pride without shame when we see a (male) chorus line dressed in leather clothes, dancing to a Donna Summers inspired disco tune called Glad To Be Gay?

Actor Antti Holma asked in Image magazine whether Tom of Finland has become a watered-down symbol for a form of heterosexual tolerance that is, at its core, in fact thinly veiled homophobia. Tom of Finland, The Musical would in this view become a token for everyday tolerance while reiterating clichés about homosexual cultures. It is true that three out of four of the musical’s production team are (heterosexual) men; Parkkinen freely admits to the musical offering a heterosexual point of view on the subject.

However, there are redeeming factors. LGBT audiences largely regarded its depiction of Finnish gay history (if not gay identities, as Holma pointed out) as refreshing. The Tom of Finland Foundation was happy to endorse the musical. The feeling of increasing intolerance not only towards LGBT cultures but also towards immigrants and women in the current Finnish political climate motivated the makers of the musical to produce a piece of theatre that portrays different sexualities through similarities, not differences. All my interviewees admitted that they wanted to recognise and emphasise the general human themes of love, devotion and sex – all of this with a sense of joy and pride, rather than shame.

As such, the musical may not perhaps ‘represent’ gay subcultures in Finland today, but it does importantly direct attention on a public stage towards new counter-narratives of Finnish history, thereby depicting acceptance of the gay community in Finnish culture. The musical relies on academic research and various musical traditions, making it credible and relatable for both heterosexual and homosexual audiences in Finland and, hopefully in the future, abroad too. 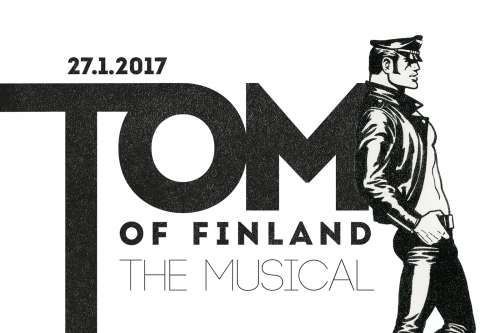 Tom of Finland The Musical