"Each of the three female voices is strong in her own right, but blended together there seems no end to the variation in mood and colour they can create," describes Ton Maas in his review of the group's gig in Belgium.​

What’s in a name? Well, for starters, it can mean different things to different people. As Essi Muikku explained after the first two songs, she and her fellow musicians had been surprised to find that in the language of their Belgian audience ‘okra’ is the name of a vegetable. And a tropical vegetable at that, quite a step from the Nordic roots of Okra Playground. To avoid any further confusion, she explained that in Finnish okra is the word for a colour – ochre, the colour of clay earth – a reference to the soil their music is rooted in.

But the members of Okra Playground were not the only ones to be surprised. Even though the name Kauhanen did ring a bell when I read the flyer handed out at the entrance, it took me a while to figure out that Maija Kauhanen was the very same singer who caused such a stir during last year’s Womex in Katowice, where she presented her one-woman-band-project.

From the band’s lineup, with modern instruments like bass guitar, keyboard and a (partly electronic) drum kit, and the way they position themselves on stage, one might get the impression they aspire to be a rock band. But although they definitely rock whenever needed, their music is firmly rooted in the Karelian tradition, as Maija Kauhanen explained when she introduced one of the tunes from their new album. 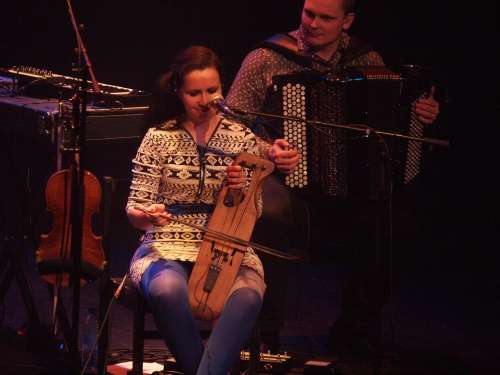 Two of the three singers accompany themselves on the kantele. The bell-like twinkling sound of the kantele adds a typical flavour to the music of Okra Playground, even when Maija Kauhanen and Essi Muikku strum their instrument like they would a rhythm guitar. The third singer, Päivi Hirvonen, whose fiddle playing provides a solid cornerstone to the band’s music, alternates between the modern violin and the ancient jouhikko, another traditional instrument which is bowed rather than plucked, its strings fingered in a way that resembles the Greek lyra or the Turkish kemenche.

Although the first couple of songs clearly demonstrated the band’s tightness and featured some nice vocal harmonies from the three singers, somewhat reminiscent of Värttinä, it took a while before I began to realise how good they actually are. Underneath their catchy surface, the songs are quite complex in structure, cleverly arranged and executed with skill and precision.

But where Okra Playground really shines is in the vocal department. Each of the three female voices is strong in her own right, but blended together there seems no end to the variation in mood and colour they can create. I was deeply impressed with their vocal skills after just a few songs, but it was not until they reached the part in ‘Turmio’, the title track of their first album, where they seemingly ‘stack’ harmony upon harmony in an almost metre-less sequence, that my jaw actually dropped. Wow!

Even though Okra Playground is still relatively unknown outside Finland, the main hall of De Ploter, the cultural centre of Ternat (a small town just outside the Belgian capital of Brussels), was almost sold out. The band did not have to work hard to win the hearts and minds of the local population. The contrast between their obvious musical quality and the somewhat clumsy manner in which they stumbled over English vocabulary in explaining the meaning of the next song had an endearing effect on the people in the hall.

Towards the end of the show, most of the audience also turned out to be brave enough to join in a sing-along, even though the line they had to repeat was first sung by Kauhanen in an almost impossibly high and razor-sharp falsetto. By obviously trying to repeat the phrase in the same pitch, the audience also managed to impress the band, judging by Kauhanen’s spontaneous squeal of delight. Instead of waiting in the wings for the last ovation to continue, the band decided to return to the stage almost immediately for a well-deserved encore, after which they invited everyone for a meet and greet in the foyer, where the party could be continued in a less formal setting.

Okra Playground will celebrate the release of their new record in a concert at the G Livelab, Helsinki, on 28 March. FMQ will live stream the concert as a 360-degree video, starting at 8.15 pm EEST here.