Finnish-French composer-musician Sarah Palu touches a deep chord in the soul with her début album Ikivirta [Everflow]. It is a journey through soundscapes featuring a multitude of musical influences, but always connected by a scarlet thread. Palu plays the kantele and the harp, and what she finds fascinating in music are the connection to her inner self on the one hand and connections between people on the other.

Sarah Palu was born in 1991 and discovered music as a means of expression at an early age, but she did not have an ambition to become a professional musician. She was brought up in the Helsinki area in Finland but has spent a lot of time abroad, particularly in her father’s homeland, France.

“I was five years old when I got hold of a kantele, and soon I was creating pieces of my own. Ever since then, I’ve been using music as a vehicle for processing my emotions.”

Her instrument teachers encouraged her to improvise and to write music, and they were never upset if Palu turned up for her lesson without having practised her assignments but with a new piece of her own.

“Even as a child, I noticed how music would bring people together. At concerts, you can suddenly see people crying and feel a bond forming from heart to heart. Audience members might say that something had touched them deeply or that they had been reminded of a brook outside their childhood home, for instance. These are things that still interest me very much: a connection to my inner self on the one hand and connections between people on the other.”

From the Espoo Music Institute and the Junior Department of the Sibelius Academy, Palu eventually applied to the Sibelius Academy proper at the encouragement of her teacher Vilma Timonen, even though in upper secondary school she had been contemplating a career as a physicist, a mathematician or a biologist. Soon, however, she discovered that she loved the idea of having music as a profession.

Palu mainly plays the 38-string concert kantele and the 14-string Korpiselkä kantele but is also proficient on several smaller types of kantele. Her other main instrument, discovered later on in her studies, is the Celtic harp. Palu’s music lends plenty of scope for visual interpretation, and it is scarcely surprising that she has been involved in numerous multidisciplinary arts projects, including films.

“My professional composer profile has evolved through my work. What is important for me is exploring existence; it is less relevant which particular tools I use.” 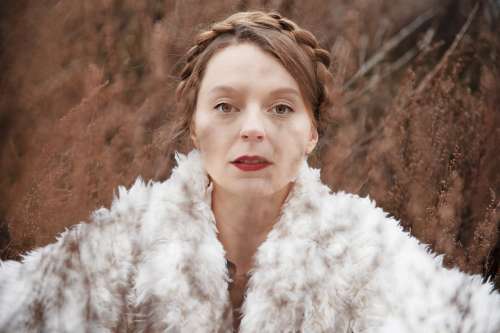 From the inner space

Connection with the inner self is a concept that Sarah Palu refers to often. Composers work from their inner space, which is why considers it important to take care of herself. She came to a turning point some ten years ago.

“I was constantly stressed and eventually realised that something in me had to change. Through meditation and introspection, I gradually changed as a person and thus also changed the way in which I make music.”

She found a kindred spirit in composer Johanna Tarkkanen, with whom she set up the OON duo and held kantele meditation concerts where both musicians and participants focused on their inner space. Their joint work Metsänkellot [Forest bells], based on a solo work by Tarkkanen, has been selected for contemporary music festivals such as Ung Nordisk Musik and the Tampere Biennale.

“All of us humans are pretty much alike, at the end of the day: something that I find comforting is in most cases comforting for other people too. But meditation is not an escape from reality,” says Sarah Palu. “If emotions such as sorrow or anger arise in us, we must let them arise. Music elevates us and allows us to encounter all sorts of things in ourselves that we would perhaps otherwise not dare face.”

Carried by the process

Palu’s début album Ikivirta [Everflow], released this spring, features several musicians and instrument colours besides Palu herself, from piano to jouhikko. The album was long in the making, the first recordings dating from back in 2015.

“There were many times when I thought that the album was finished, but then I always got carried away with a new piece, and things were happening in my life. It wasn’t until now that I was ready to open my heart and release the album.”

Along the way, Palu collaborated with Iiris Heikka on the music video Koti merellä – Laulu lähteneelle [Home at sea – Song for the departed], which received a prize at the Oulu Music Video festival in 2018.

At the Sibelius Academy, Palu studied folk music, composition, music technology and improvisation, giving her a well-equipped tool kit for creating music. Still, she says that with her début album she let herself be carried by the process and did not think about things unduly rationally.

“It can be scary to start composing when you have no idea what’s going to come out. Whatever the music called for, I had to learn in the process. There was this one time when the producer suggested that a particular piece might include a dobro, and I started working on it without even thinking whether I could compose for the dobro or knew anyone who could play the instrument. The pieces just fell into place somehow.”

Palu worked with Matias Tyni on producing the album, and sound engineer and mixer Mikko Haapoja also made a significant contribution. Ikivirta is a coherent artwork where the flow of music is never interrupted, even though it ranges stylistically from archaic to minimalist. It was not until the music was done that Palu began to catalogue all the things that had gone into it.

“I’m fascinated particularly by archaic folk music, the ancient kantele and jouhikko traditions and the music of other Finno-Ugric peoples, both because of the idiom itself and because of the conception of time involved. I’ve also listened to a lot of pop music and electronic music, and there are some features of classical music on this album too.”

In pop music, Sarah Palu is known as a member of the pop/folk group Viitasen Piia. The band’s busy summer festival calendar was recently wiped clean because of the coronavirus epidemic, so now she suddenly finds herself unoccupied and able to think about what might come next.

Ikivirta is a concept album, not intended for any particular performing ensemble, so it remains to be seen what sort of a life the material will have. Palu has already been contacted by people in dance and visual arts. “I love performing, so the next thing I’d like to do is to create music for a new band that can also perform it live.”

Her dreams for the future have to do with bigger things than just personal success.

“I’m already doing what I love, so I’m already living my dream. What I dream about is for us to discover nature within us, a harmonious relationship with the world we live in while being respectful of each other. If we no longer have a liveable planet a few decades from now, then where will I do this work that I love? If we have no clean air or water, I won’t be able to play my kantele. We need to reinstate respect for nature, and because we’re not separate from nature, this means reinstating respect for ourselves.”