Finnish war films feature exquisite music. To help you get the most out of the music, here is a listener's guide to the cream of the crop — although that includes one film with no score at all.

Finnish World War I l films, depicting the Winter and Continuation Wars between Finland and Soviet Union in 1939—40 and 1941—44, have a major place in contemporary Finnish culture. They form a central cultural imagery and mythology through which the conceptions of national identity — of the history and future of Finland and Finnishness — are shaped, defined and re-negotiated. Besides, as every war film in the world, they participate in the discussion on the deepest perennial problems of mankind in general.

Music has a decisive role in this narration. Indeed, music is an age-old form of propaganda. The music tells the film audience what to think of the war, the historical events and the deaths on the screen. Of all the means a film uses to bind the spectator to the film, music is the most powerful. It almost forces the audience to identify with the narrative, and it does so, for the most part, insidiously, without the audience noticing it.

The first filmatisation of Väinö Linna's (1920—1992) iconic war novel Tuntematon sotilas (The Unknown Soldier, 1954), directed by Edvin Laine (1905—1989) in 1955, was and remains the most successful film ever in Finland: about 2.8 million people — more than half of the Finnish population — saw it in theatres. The black-and-white film that depicts ordinary men in an infantry regiment during the Continuation War has become a potent patriotic symbol and national monument.

The music in the film does a powerful job of building up the Finnish identity and constructing the mythical story of a heroic nation. The original music was composed by Ahti Sonninen (1914—1984), and he does his part of nation-building with ever-flowing medleys of provincial anthems, hymns, military marches, folk tunes and other patriotic songs, often heard as quotations in Sonninen's symphonic score. The music forms a musical image of the unity of the Finnish people and of the mythic "woodland warrior" (aka korpisoturi).

The existential dimension of the war is constructed with more dissonant expressive music that has a chamber music quality. This music is used to paint the deaths and sufferings of individual soldiers. However, it never questions the purpose of the sacrifice, because it is heard within the massive frame of super-patriotic music. The film starts and ends with Jean Sibelius' Finlandia (1899), i.e. the musical arch-symbol of Finnishness, patriotism and independency. The Story of the Nation is born from the threatening imagery of the angry brass chords and the thunderous timpani in the beginning of Finlandia, and it closes with the symbolism of freedom in the composition's final hymn part. The narrative schema of Finlandia, "from angst to liberty", works in the film as a patriotic sacrificial symbol, rationalising the trauma by explaining the losses and struggles as necessary: to retain the independency (to get into the hymn part).

Sissit (Commando Assault, 1963), directed by Mikko Niskanen (1929—1990), was something completely different. The black-and-white film was based on Paavo Rintala's (1930—1999) controversial war novel manuscript Sissiluutnantti (1963), a book that inaugurated the long series of great "literary wars" in the 1960s. Both the film (that premiered before the book came out) and the book challenge national taboos, ideologies and aesthetic conventions.

The story focuses on a bunch of long-range reconnaissance patrol men during the last summer of war in 1944. They perform commando operations behind enemy lines and are led by a "first-rate killer" lieutenant Takala (Matti Oravisto). Between the operations the men suffer mental disorders, drink alcohol excessively and pursue grotesque sexual relations. The insanity of their lives is heightened by commanders-in –chief being portrayed as indifferent to the men's lives. The existential film describes the psychological effects of war, especially the effect of being a full-time killer has on an individual soldier's mind — and through that on society at large. This is efficiently constructed by Erkki Ertama's (b. 1927) intense original music that draws On electronic music, modern jazz, bebop and other musical methods of new wave cinema. Syncopated off-beats, pressing rhythms, tightening harmonies, absurd fragments and odd timbres — such as the extremely low register of an electric organ or the Hexatonlike high wailing — explains how the soldiers' minds are irreparably damaged by the war.

The second filmatisation of Linna’s novel The Unknown Soldier was directed in 1985 by Rauni Mollberg (1929—2007). It is a radical step away from the 1950s version. One of the most striking differences is in the music: there is no score at all. Some scenes feature music — diegetic music heard by the film's characters — but these scenes are made in such a hyper-realistic way, and the music is so ugly, grotesque, distorted and slurred, that it is a question of anti-music. Drunken soldiers murmur a mutiny song related to class conflicts and civil war in 1918, and intoxicated officers shout a Nazi song — both reminding the audience of deep collective traumas as well as far, far away from comforting, sublime or in any way pleasant film music.

The lack of score in a film that lasts over three hours is a decisive factor in the film's socially critical aesthetics and anti-war message: there was no background music in the war. The audience is given no emotional relief, comfort or exalted feelings — all so easily created with film music.

The Original music by Juha Tikka (b. 1955) draws on Finnish and Ostrobothnian topics and on the psychoacoustics of postmodern music. Slow tempos, minor modes, choral progressions and a folk choral feeling dominate. The music has both symphonic broadness and an austerity of chamber music. The distinction between music and sound design is blurred during scenes of combat — musically handled sound effects and ambients construct a sense of horror and existential void. The "war theme" consists of a melancholic series of dark notes that hobble up two octaves. The notes are of irregular, unpredictable duration, and in that way they resemble the lives of the men going to war. The title theme (based on a melody by Jukka Haavisto) is a heavy-hearted, minor mode theme with poignant interval leaps that are as spacious as the landscapes of rural Ostrobothnia. The music reveals that this is a story of both collective and individual tragedy. Additionally the music functions as a therapeutic channel to the troubled emotions evoked in the audience.

Rukajärven tie (The Ambush, 1999), directed by Olli Saarela (b. 1965), focuses on a small bicycle platoon on a recon mission in Russian territory at the beginning of the Continuation War, and especially on its leader Lt. Perkola (Peter Franzén).

Tuomas Kantelinen's original score as well as the source music in the film avoid military, national and patriotic references. Music draws on heart-breaking Italian opera arias and Tchaikovskian lamentation. It does not tell the story of the Nation but of an individual under horrible conditions, characterised not only by life on the front line but also by a loss of love (the main character hears that his fiancée has been killed). Topics of lamentation and pianto — musical sighs and tears — dominate the music. This subjective music is heard even in some combat scenes. It emphasizes the unbridgeable conflict between war and civilian life, between killing and loving. The theme of love, both in romantic and religious terms, is an important philosophical theme in the film. A central object of quotation is Gaetano Donizetti's (1797—1848) opera aria Una furtiva lagrima from the opera L'elisir d'amore (1832). The first time it is heard is when the first comrade has died, and the men are having a kind of commemoration in a partly blown-up house. One of the men sings the aria, and after a while it is heard by a full symphony orchestra. The transformation of diegetic music to non-diegetic music elevates the thematics of the scene to a universal symbolic level. The setting is full of Christian iconography and is reminiscent of Leonardo's The Last Supper. And it is a kind of last supper for the men before their transformation from civilians to killers, and before the real battles, horrors and deaths begin.

Echoes of tragedy: Beyond the Frontline

The first Finnish Swedish-language WWII war film, Framom främsta linjen (Beyond the Frontline, 2004), directed by Åke Lindman (1928—2009), is characterised by aesthetics that resemble documentary film-making. The film focuses on a Swedish-speaking Finnish infantry regiment during the Continuation War.

The original music, composed by Lasse Mårtenson (b. 1934) is beautiful chamber orchestral music with a slow, elegiac, epic feeling and a folk-like modality and barrenness. The combat scenes are not accompanied by music. But right after combat, when the men who have survived witness the results of the slaughter and destruction they have just contributed to, the music comes in like a mournful comment emphasising the general tragedy of the war. Cries and laments of the injured (both Finnish and Russian) accompany the music. Some additional music was composed by Riku Niemi (b. 1967).

Patriotism in the New Millennium: Tali-Ihantala 1944

The most recent Finnish WWII film, Tali-Ihantala 1944 (2007), directed by Sakari Kirjavainen and Åke Lindman, is a dramatised documentary of the famous Tali-Ihantala battle at the end of the Continuation War. There is no dramatic plot or main characters — it is rather an uncomplicated historical tableaux of war operations, and has a kind of educational feeling. The music, composed by Timo Hietala (b. 1960), is captivating in itself. Played by the Lahti Symphony Orchestra under the direction of Jaakko Kuusisto (b. 1974), it is full of fine solos by such virtuosic musicians as clarinetist Kari Kriikku (b. 1960) and tenor Topi Lehtipuu (b. 1971) among others. Mostly the slow, plangent and sorrowful music emphasises the severity and necessity of the patriotic sacrifice. It gives a grave aura to the subject matter, creates a musical homage and reminds the audience of the importance of remembering. The solo clarinet and tenor vocalise touching y play out the fragility of life. A fresh touch of the Finnish tradition of (post) modern jazz is added to the mix. At the very end, a super-patriotic song Oi kallis Suomenmaa is quoted, and through this the basic message of the film is crystallized — that of the importance of sacrifice and great defensive victory.

Remake of a classic relies on sound design 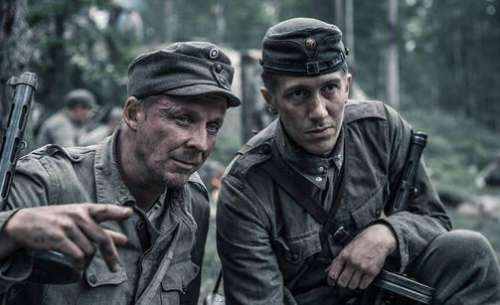 Premiered in the centenary year of Finland’s independence in 2017, Tuntematon sotilas (The Unknown Soldier) directed By Aku Louhimies is to date the fifth dramatic adaptation of the eponymous classic novel by Väinö Linna. There have been two previous film versions, an opera by Tauno Pylkkänen premiered on Finland’s 50th anniversary in 1967, and a dramatisation by Kristian Smeds for the 90th anniversary in 1997.

Yet for many Finns the iconic version of this story is the black-and-white film directed by Edvin Laine in 1955, which opens symphonically with Sibelius’s Finlandia. The version by Louhimies is of course far more modern in its production values and relies heavily on sound design. The horrors of war are reflected not only in the original score composed by Lasse Enersen but also in the sound design by Kirka Sainio. The tumult of war is nearly unrelenting, rendering the soldiers partly deaf. The source music in the new Tuntematon sotilas pays homage to Laine’s version, as the feel of the era is recreated in military music and in the songs sung by the soldiers. When peace comes, Finlandia makes a cameo appearance, albeit in folk music fashion.