Sofie Lithenius (1847–1926) was a prolific and energetic primary school teacher and composer who played a unique role in the history of Finnish vocal music and music education.

Sofie Lithenius was born into the family of master lathe-turner Henrik Lithenius in Turku. The family was a musical one: the father was an avid amateur flautist, and Sofie’s brother Anton played the violin at home. Sofie tried out their instruments herself in secret, although she had been forbidden to do so. Sofie attended a girls’ school and eventually persuaded her family to allow her to take lessons from Viveka Ekman (1826–1911), a prominent piano teacher in Turku. As a child, Sofie dreamed of becoming a professional musician, but this proved financially impossible, and her family was not particularly supportive of her aspirations.

In the late 19th century, the most common path to independence for middle-class women in Europe was to become a school teacher. Like many of her contemporaries, Sofie Lithenius took this path and trained as a primary school teacher at the Tammisaari Seminar. Teaching was her day job for nearly 40 years; she taught singing, crafts and geography at Swedish-speaking girls’ schools and primary schools in Hamina, Pori and Helsinki, where she eventually settled permanently.

Lithenius had an obvious ambition for improving her pedagogical skills. She attended international teacher conferences and planned study trips abroad. Along with many of her colleagues, she took a particular interest in the movement, sight-singing and voice teaching methods of Jacques-Émile Dalcroze, which she was introduced to at the source in Switzerland.

Creating a career as a teacher did not dampen Lithenius’s passion for music. While working in Helsinki in the 1880s and 1890s, she studied music theory with Professor Richard Faltin and attended lectures at the Helsinki Music Institute as an outside observer. She also completed the voice teacher’s examination for primary school teachers. She taught piano and was a sales agent for musical instruments to various music shops.

Lithenius employed her professional composing skills above all in creating repertoire for children and adolescents, publishing a remarkable number of pieces between the early 1890s and mid-1920s. These include solo songs, partsongs, singing games and minor music theatre pieces. They were often patriotic in nature (a case in point being the song Lasten kotimaan rukous jouluna [Children’s homeland prayer at Christmas], published in 1899), and their topics extended from classic fairy tales to romanticised nature.

Lithenius’s Christmas songs proved particularly popular. Sinivuorten yö [Night in the blue mountains] and Joulu tullut on [Christmas has come] remain in the core Christmas repertoire in Finland to this day. Her songs Vår svenska sång [Our Swedish song] and Östersjön [Baltic Sea] continue to feature in community singing collections for Swedish-speaking Finns. Sofie Lithenius set both her own poems and poetry by J.L. Runeberg and Zachris Topelius; the latter provided the lyrics for the popular children’s song Pikku Lauri [Little Lauri].

Lithenius can justifiably be described as a pioneer in Finnish music education. Her collections were intended for homes, schools and nurseries alike and included not only her original work but also arrangements of other children’s songs. Many of her original songs were published with simple accompaniments suitable for beginning piano students.

Lithenius’s songs for children were standard repertoire in Finnish homes in the early 20th century and went through several printings. This is a printer’s proof for the vignette adorning Småttingarnas marsch [Infants’ march]. Source: Archive of the Sibelius Museum.]

Sofie Lithenius’s prolific output was noted in the contemporary press. Her works were published by distinguished Finnish publishers such as Wasenius and Fazer & Westerlund, in many cases in simultaneous editions in Finnish and Swedish. Contemporary critics commended Lithenius’s melodic writing, described as natural and simple in a positive sense. The educational significance of her pieces was also appreciated in the press.

Among professional musicians, however, Lithenius was implicitly of a lower rank than her male colleagues writing orchestral works or chamber music; after all, she was ‘merely’ a composer of children’s songs. As an example, a critic writing under the pseudonym B.R. in Valvoja magazine noted bluntly in 1898 that “songs like this usually [...] are of no particularly profound musical significance”. Many of her colleagues involved in similarly pioneering work in music education encountered the same belittling attitude.

Yet despite all of the above, some of Lithenius’s songs were programmed by adult professional and amateur singers in her lifetime. Her lullaby Ro, ro, liten vän [Rest, rest, little friend] was particularly popular, being performed for instance by baritone Sigurd Englund and the choir of the Helsinki Workers’ Association under Oskar Merikanto. When singer Ester Niska-Forsman organised what was described as the “first children’s concert” in Helsinki in October 1907, Lithenius’s music was self-evidently included.

Around the turn of the century, Lithenius ventured into writing choral works, solo songs and piano pieces, but her output in these genres remained limited. Her most ambitious composition was a choral cantata to a text by Topelius, written for the centenary of the birth of education reformer Fredrik Cygnaeus and performed to acclaim in the Great Hall of the University on the date of the centenary, 12 October 1910.

Lithenius retired officially from her teaching job in 1913 but continued to publish her works, for instance in the Christmas annual of the Swedish-language primary school association, Julstjärnan [Christmas star]. In the early 1920s, she released a new two-volume collection of songs, Pumpernickelns visor [Pumpernickel’s songs]. She continued writing music practically until the day she died.

Lithenius was by no means the only creator of singing games and school songs in Finland at the turn of the 20th century. In many respects, her career path resembled those of her colleagues Edith Sohlström, Lilli Thuneberg and others – school teachers who also wrote children’s songs. Lithenius must have been familiar with many of these colleagues; she is known to have set texts by her colleague Ellen Nervander, who in turn included Lithenius’s compositions in the songbooks that she edited and published.

Although Sofie Lithenius has unfortunately sunk into obscurity, some of her songs live on, and not just at Christmas. Songs and singing games written by her were adopted into the official primary school curriculum in the 1930s, and one of her most popular sacred songs, Ilta on tullut, Luojani [Evening has come, O my Creator], was added to the hymnal of the Evangelical-Lutheran Church of Finland. It is high time to give her entire career the recognition it deserves in the annals of Finnish music. 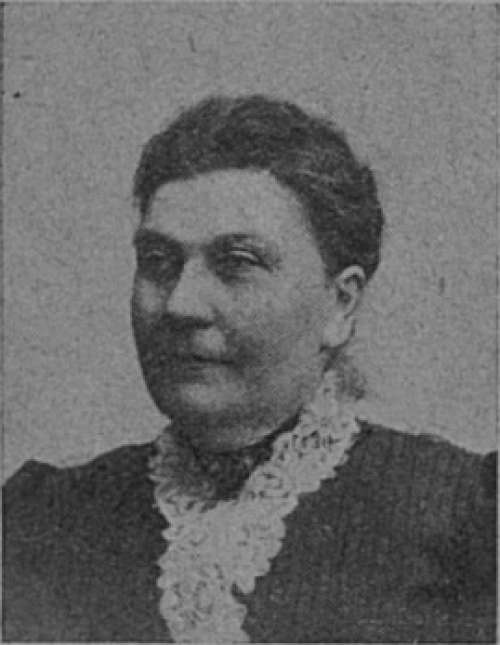 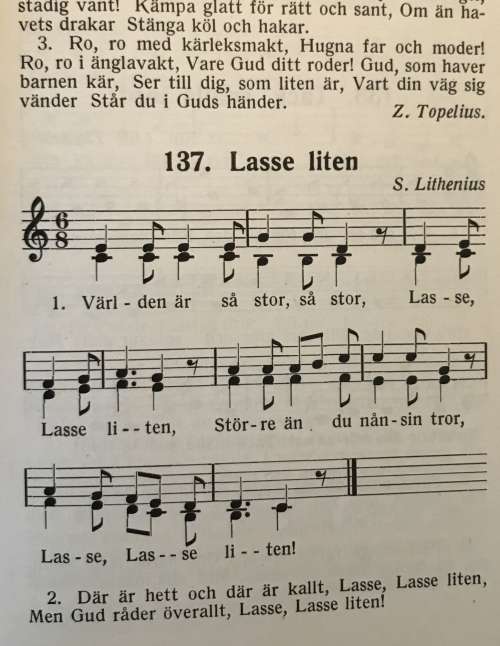 Left: Sofie Lithenius was a pioneer in Finnish music education whose work was appreciated even in her lifetime. Source: Naisten ääni 27 March 1926 (no. 5–6), p. 9.
Right: Music for the popular children’s song Pikku Lauri [Little Lauri] in Swedish.