"Producing premiere recordings of Traumgesicht and two other key works by Melartin is an act of high cultural merit."

“It is a terribly difficult piece, and such orchestral writing has never before been attempted in this country.” Erkki Melartin was right on the money in this description of his new work, the tone poem Traumgesicht, in 1910.

Stylistically this work represents a sort of synthesis of Scriabin, Debussy and Strauss, and as such forms a template for the orchestral profusion with which Väinö Raitio and Ernest Pingoud shocked concertgoers a decade later. Yet it was also typical for the eclectic Melartin that he never returned to this aesthetic, even if he retained some of its elements in his compositional toolbox.

For Traumgesicht to be performed only seven times and then forgotten for 81 years before being dusted off by Hannu Lintu and the Finnish Radio Symphony Orchestra in 2013 is incomprehensible. Producing premiere recordings of Traumgesicht and two other key works by Melartin is an act of high cultural merit.

Marjatta (1914), a tone poem for soprano and orchestra, suffered a fate similar to that of Traumgesicht. It was commissioned by Aino Ackté, as was Sibelius’s similarly scored Luonnotar (1913), but while Sibelius chose to set text from the cosmological myth that opens the Finnish national epic, the Kalevala, Melartin took his text from the final canto of the epic, a symbolic depiction of the arrival of Christianity in Finland.

Musically, too, Melartin treaded his own path, and the suggestively coloured orchestral texture shifts subtly between Impressionism and Expressionism. The emotionally charged solo part is more lyrical than that of Luonnotar and poses quite different demands on the soloist. Soile Isokoski is a highly sensitive performer of Luonnotar, and Marjatta also suits her flexible, beautifully shimmering voice excellently.

The flourish topping off this album is a suite of music from the first full-length ballet written in Finland, Sininen helmi (The Blue Pearl, 1929). It is a fairy-tale ballet in the manner of Tchaikovsky’s Nutcracker, and Melartin’s translucent orchestration lends the music a delightfully fantastic colour. There is something quite Gallic about the refined elegance of this music, which more than once recalls Ravel and Roussel.

Lintu is eminently comfortable with the multiple aesthetic aspects of Melartin. His readings strike a happy balance between the analytic and the emotional, coaxing an inspired and precise performance from his forces.

Listen to the recording here. 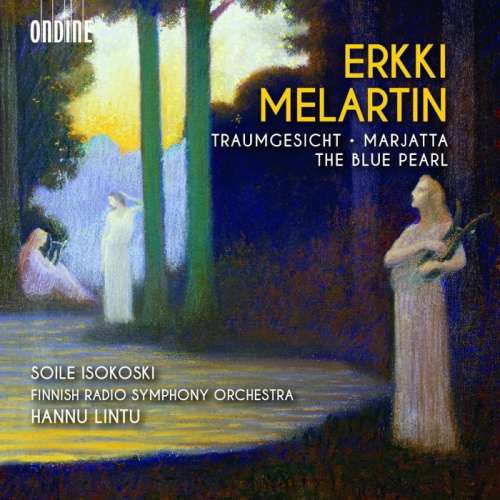