Dima Slobodeniouk will begin his post as the Principal Conductor of the Lahti Symphony Orchestra this autumn. It is a busy time for the conductor who has climbed to the top the long way. His hectic lifestyle is balanced by his passion for aviation.

It was January 1992 when Dima Slobodeniouk (b. 1975) and his family moved from Moscow to Finland. The Soviet Union had collapsed just months earlier.

The reason for leaving was music. Dima’s father had previously been a viola player with the Moscow Philharmonic, but had gradually gravitated from being an artist to being a bureaucrat. When he became interested in playing again, the family migrated to Finland where the father was immediately employed by the Vaasa City Orchestra. Dima’s mother carried on working as a pianist and Dima continued his violin studies, which had occupied all of his free time ever since he was five.

”There was no question of choosing anything else as all my family members were musicians, with the exception of a just a few cousins who didn’t play an instrument.”

After six months, Slobodeniouk moved to Jyväskylä to continue his violin studies at the conservatorium, feeling more motivated than ever. However, the real spark for professional musicianship was found when he started in Torsten Lindfors’s conducting class in 1994.

”It just felt really good. Making music felt more natural than ever before. The focus moved from a single part to the piece as a whole”, Slobodeniouk remembers an important turning point.

Feeling increasingly more comfortable with a baton than a violin bow, he continued his conducting studies privately with Atso Almila and later at the Sibelius Academy, from where he graduated in 2001.

A new recreational outlet emerged ten years ago when a friend who was returning from a boat fair gave Slobodeniouk a discount voucher. A flying lesson for 80 euros. After his first time in the air there was no turning back.

Since then, Slobodeniouk has clocked up more than 400 flight hours with different types of aircrafts. In 2014, Slobodeniouk received his private pilot licence and an instrument rating which allows him to fly with less than a metre’s visibility, simply by referring to the instruments in the cockpit. A bit like conducting a whole opera without looking up from the score.

It is easy to draw parallels between Slobodeniouk’s passionate enthusiasm for flying and his profession. There are hundreds of buttons and meters in the cockpit, and the freedom to navigate towards any chosen horizon. The conductor’s podium offers a view of a hundred players who can be guided as one wishes, and the conductor can decide the outcome almost like a pilot. Slobodeniouk accepts this metaphor.

”Not everything can be controlled when flying. It’s essential to control your instruments and your nerves, but you cannot control nature. Neither can, or should, a conductor control everything. You can only have control over your own knowledge and feelings”.

It is true: technology has no feelings. A big part of a conductor’s work has to do with psychology. This has always been the case. The old guard had an unwavering trust in the model where the maestro is driven by his own ideas and the terrified players fulfil them. In Russia, this is a particularly common pedagogical method, experienced firsthand by Slobodeniouk as a young child.

”If you survive my lessons, you will become a violinist”, he remembers his old violin teacher’s warning. In the end, Slobodeniouk was the student who survived in this teacher’s class the longest, yet he never became a violinist. He believes in a different kind of influence.

”You can get people to do things by making them afraid. Another way is to motivate them. These same people can be made to want to play in a certain way for a certain conductor, and subsequently to play in the best possible way for the audience. Nothing beats this method.”

Still, he is ready to admit that he can sometimes be quite bull-headed and force his way through obstacles. Maybe this is what some orchestral musicians mean with they describe Slobodeniouk as “highly strung”. According to them, Dima is really nice but at some point during the rehearsal process you can tell that he is close to losing it. But he never does.

Slobodeniouk’s career has not been one spectacular lift-off. Instead, he has achieved his current success through a slower and steadier working pace than many other Finnish conductors of international standard. Not unlike a plane that steadily climbs towards the clouds.

One of the first orchestras to have faith in Slobodeniouk was the Helsinki Philharmonic Orchestra. When the orchestra was looking for a new chief conductor, Slobodeniouk’s name kept coming up in corridor conversations. His relationship with the orchestra, however, has been special since 2001 when he got to conduct one of the orchestra’s children’s concerts soon after he graduated. The experience of being in front of a big orchestra was unforgettable.

For the first decade of the 2000s, he built up his professional experience as the Principal Guest Conductor of the Vaasa City Orchestra and the Kymi Sinfonietta, and as the Artistic Director of the Oulu Symphony Orchestra. In addition, he gradually got to know most Finnish orchestras. In our culture that idolises young stars, the 41-year-old Slobodeniouk can be considered as an exception to the rule because of his slow breakthrough.

Three years ago he was appointed as the Principal Conductor of the Orquestra Sínfonica de Galicia, and international invites began to arrive more and more frequently.

“As an amateur aviator I know that the take-off is the most critical stage during a flight. I would like to believe that by this stage the wheels are no longer touching the ground, and the next step now is to gather altitude and speed!” This is how Slobodeniouk reflected his career in an interview with the Avanti! Chamber Orchestra in 2013 when he had finally begun to attract steady international attention.

Now, in 2016, he is reaching a comfortable cruising altitude through his new post as the Principal Conductor of the Lahti Symphony Orchestra, starting this autumn. In addition to various guest conductor stints, he will now have to allow 12 weeks for Galicia and eight weeks for Lahti each year. There will be no empty space in his calendar for the next two and half years. It is obviously a tiring schedule, but giving up is not an option. Not now.

”You have to strike when the iron is hot. When you stand in front of the orchestra you have to know the score and you simply have to deliver as a conductor. Tiredness is no excuse for failure.”

Slobodeniouk’s new position as a chief conductor of one of the top Finnish orchestras marks a significant milestone in his career. The orchestra is playing at an extremely high level, and it has made its way to the top with the help of some of the best Finnish conductors. Okko Kamu, Jukka-Pekka Saraste and Osmo Vänskä are big names. Slobodeniouk faces the task of filling these big shoes with healthy confidence.

”Well, it is definitely a bit nerve-racking, but so are many other things in life.” 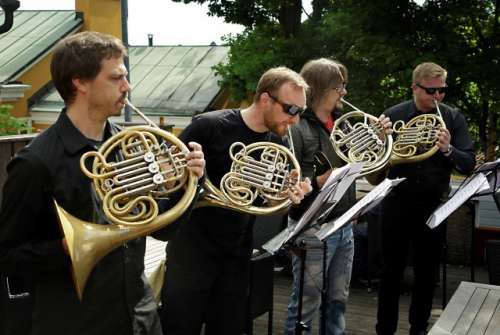 Curating the program for the Avanti! Summer Sounds event is considered an honour which is passed on from one artist to another. This year’s festival, 29 June to 3 July, has been curated by Dima Slobodeniouk.

Throughout the years, each Summer Sounds event has shaped to resemble its curator. Sakari Oramo, Magnus Lindberg, Kaija Saariaho, Barbara Hannigan, Matthias Pintscher – some of the most prominent contemporary music luminaries have been responsible for curating the event ever since 1998.

Receiving the honour a few years ago took Dima Slobodeniouk by complete surprise, as well as discovering the amount of work involved and the time spent listening to new repertoire. But there is no sign of exhaustion when he begins to explain his ideas behind the works he has chosen.

”Today’s people are always late, for everything. Everyone is in a terrible rush to get somewhere, and as you know from driving a car, the faster your speed, the narrower your field of vision.”

Initially, Slobodeniouk wanted to leave out any background explanations and let the music to explain itself. However, this year’s event title “Just Be”, thrown in at the last minute, creates a clear context for the selection of works. Just be and receive, freely and calmly, in an open state of mind.

Slobodeniouk’s programming choices accentuate the diversity of the Summer Sounds event and Avanti!’s eclectic orchestral approach. A single concert can accommodate Mussorgsky’s Pictures at an Exhibition arranged for the accordion, Jouni Kaipainen’s string quartet, and a harp sonata by C.P.E. Bach. Or Mozart’s Clarinet Concerto and Vincenc Masek’s Concerto for Glass Armonica, Verrophone and Orchestra. With Brahms Symphony and Beethoven Violin Concerto, the final concert is so closely related to the Classical/Romantic core repertoire that one wouldn’t normally associate it with Avanti!.

Slobodeniouk still has strong faith in the listeners’ ability to discover mutually complementing elements in different festival works and to put them together coherently even without specific guidance. “We present music here and now and there is no need to say anything about it. The music itself is enough. The most important thing is people’s natural desire to listen to music.”

The Lahti Symphony Orchestra’s 20th International Sibelius Festival will take place at the Sibelius Hall in Lahti from 5–8 September 2019. Read more about the festival here.