The performance of Rautavaara's Flute Concerto with Sharon Bezaly, Lahti Symphony Orchestra, and Dima Slobodeniouk is enjoyable in its richness of instrumental colours.

Einojuhani Rautavaara’s (1928–2016) Flute Concerto was premiered in 1974. Later, the composer revised the first and last movements, reducing the number of different flutes that the soloist plays from four to three. He also added the title “Dances with the winds”. The two versions are so similar that one or the other appears redundant on flautist Sharon Bezaly’s recording. In any case, the performances with Lahti Symphony Orchestra and Dima Slobodeniouk are enjoyable in their richness of instrumental colours.

Aram Khachaturian’s (1903–1973) Flute Concerto is a transcription of his popular Violin Concerto of 1940. The transcription, made by flautist Jean-Pierre Rampal in 1968, is a true showcase for the soloist. Rhythmically effective Armenian folklorist elements characterize the somewhat heavy orchestral part, here provided by São Paulo Symphony Orchestra under Enrique Diemecke. With reason, the centre of attention is the elaborate solo part and Bezaly’s brilliant, flowing virtuosity. 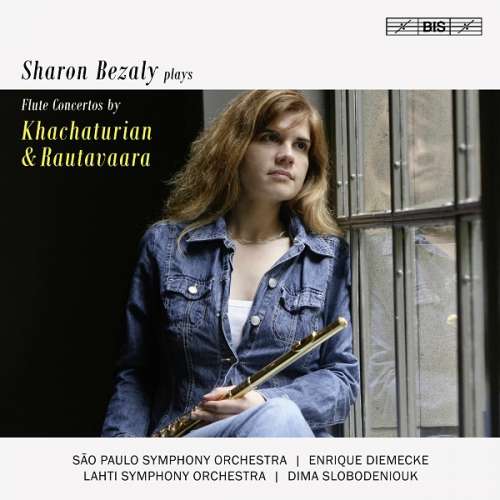