Folk musician, conductor, composer, guitar hero. Jukka Iisakkila has tried all of that – with flying colours. A new feather in his cap is the recent collaboration with guitarist Steve Vai.

Conductor Jukka Iisakkila lowers his baton. Of all the beautiful, heart-rending and memorable performances he has seen through during his career, this one holds a special significance. We are in Helsinki, at the Nordic premiere of twelve compositions by legendary electric guitar innovator Steve Vai.

The concert has been a resounding success, the crowd has risen to reward the performers with a standing ovation, and all on stage are smiling: Vai, Iisakkila, the entire Tapiola Sinfonietta and pianist Seppo Kantonen, guitarist Marzi Nyman, bassist Jaan Wessman and other outstanding members of the jazzrock band hand-picked by the conductor to tackle the difficult scores.

”What a ride! I am feeling exuberant and energized and expect to stay in this positive mode for quite a while”, says the 45-year old Iisakkila fresh off the stage at the Huvila Festival Tent. For him, this project has been a labour of love for a long time.

Even though Iisakkila has an excellent working relationship with the Tapiola Sinfonietta, It took years to get the schedules aligned, the funding in order and the venue secured. Taking a deep breath, he singles out his favourites from the program.

”All compositions are fantastic, but I did cherish the opportunity to present Frangelica to the people. It has so many sides to it. It is fresh and offers ample opportunity for improvisation. It makes me think of the masterful Leonard Bernstein. And I love Bernstein! Another comparison that comes readily to mind is Frank Zappa, obviously an important mentor and early patron for Steve... I also love the melodies of Whispering a Prayer and the rhythmic complexity and technical challenge presented by Taurus Bulba. On a more personal level, Salamanders in the Sun is an important piece for me.” 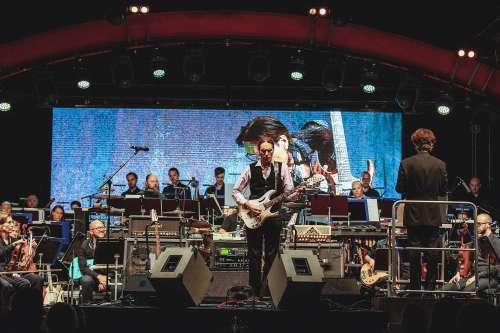 In a way, getting to collaborate with Vai was some sort of poetic justice. Or karma fulfilled. Or whatever one wishes to call it when an artist gets to share the stage with one of their foremost heroes. Iisakkila takes us back to his childhood.

”My roots are embedded in folk music. Many of my relatives performed with the Pirkanmaan pelimannit or the Sahalahden pelimannit, the two fiddler music ensembles carrying the tradition of folk songs from my native Tavastia region.”

Since he had started playing the piano already at the age of four in his hometown of Valkeakoski, Iisakkila was soon invited to join his uncles, aunts and cousins as they travelled the countryside with the tunes of the land in their hearts. But the youngster needed something to balance the scales. Whenever he felt overwhelmed by either classical music or folk melodies, he turned to his father’s record collection.

”We had three albums that fascinated me: Lumpy Gravy (1968) by Frank Zappa, The Lamb Lies Down on Broadway (1974) by Genesis and Flex-Able (1984) by Steve Vai. I listened to them all a lot and Vai’s otherworldy debut disc almost haunted me.”

The seeds for a change or at least a logical progression were sown. Not long after, Iisakkila chose first the percussion and then the electric guitar as his next tools of expression.

”Percussion came recommended by my piano teacher, but the guitar was something I felt a magnetic pull towards. Vai and Zappa had put their spell on me.” 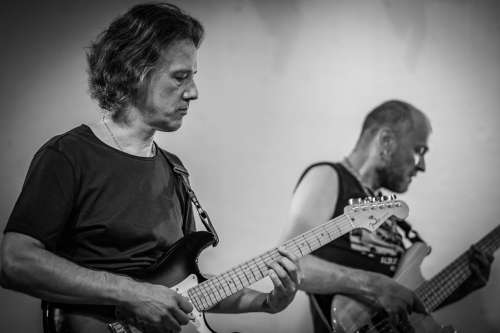 The guitar - a magic icon of freedom

Iisakkila continued with his piano and percussion studies but also commenced a gradual shift towards conducting. The choice was solid, as proven in 2005 as he graduated from classes led by living legend Jorma Panula at the Kungliga Musikhögskolan in Stockholm.

However, the budding conductor was also eagerly exploring the possibilities of the electric guitar. The gleaming black Kramer Jukka had purchased in his teens – mainly with money earned by working as a summer helper at a nearby farmhouse – had become a symbol of freedom and something to manifest his innermost feelings and desires with.

”There was a period when I contemplated on choosing the violin but it didn’t appeal to me enough. I wanted something different and went for the guitar.”

"The guitar was something I felt a magnetic pull towards. Vai and Zappa had put their spell on me.”

Iisakkila’s enthusiasm and drive were consummated four years ago as he enrolled at the Vai Academy in Hollywood. His initial motivation was to get firsthand data on how Vai operates, which techniques he favours, and how he approaches composing. On the other hand, he was also busy working on his doctoral dissertation for the Sibelius Academy.

”My subject was absurdism in the works of György Ligeti, Luciano Berio and Frank Zappa so I was also hoping to interview Steve on this subject.”

Keeping busy also in the future

But of course Iisakkila also had knowledge of Vai’s compositions in the classical realm. Perhaps, at least subconsciously, he was hoping for a foot in the door on that sector as well. And before he headed back home, Iisakkila did indeed conduct Vai’s music in concert. Be careful what you wish for as it may come true, as the saying goes.

Which brings us pretty much full circle to where we started. Iisakkila and Vai are currently planning to record and release the material performed in Helsinki. In addition, Iisakkila is getting ready to face new challenges as a conductor, enjoying the buzz generated by his recent debut solo album Clocks and Clouds and preparing for shows by The Breed, a tribute group to Finnish progressive rock legend Pekka Pohjola he co-founded a few years ago.

”In the imminent future, my calendar holds quite a bit of arranging and composing. And I will be donning my conductor’s hat not only in Finland and Denmark, my foremost playing grounds, but also in Japan and Germany. The future looks very bright.”