Not an easy listening disc by any means, but a magical compilation that grows on you with repeated listening, not least because of the superb performance given by Trio Aristos.

Through the centuries, the string trio has struggled to assert itself in the shadow of its larger, more sonorous and historically better established sibling, the string quartet. Yet numerous composers, dead and alive, have written quite substantial music for string trio, and when it is well written and well performed, one scarcely misses the absent second violin.

The BIS release Nordsending – whose untranslatable title is an ancient southern Norwegian reference to destructive magical attacks by witches from the north – showcases the string trio as a versatile vehicle for interpreting the aesthetics of contemporary music, in both sound and expression. The composers featured here share an uncompromising modernist idiom, though with enriching excursions in various directions.

In Bent Sørensen’s Gondole (2010), references to the history of music whizz by in a fascinating way – even the cellist gets to lead – while in Kaija Saariaho’s Cloud Trio (2009) a couple of rhythmic, energetic movements display less typical shades from her palette. The Danish–Polish Trio Aristos has collaborated with composer Per Nørgård for a long time; in this venerable Danish maestro’s Strings (1992), rational methods are employed in the service of emotional expression. In Tjampuan – Where the Rivers Meet (1992) for violin and cello, Nørgård once again uses the Medieval “hocket” technique to create the illusion that there are actually three or even four instruments playing.

Rift (2014) by Norwegian composer Henrik Hellstenius is a sprawling modernist piece that comes across as the least original of the pieces featured on this disc, while Nørgård’s Pastorale ur filmmusiken till Babettes gästabud [Pastorale from the music to the film Babette’s Feast] (1988), a tiny gem, is a welcome contrast to the rest of the repertoire. 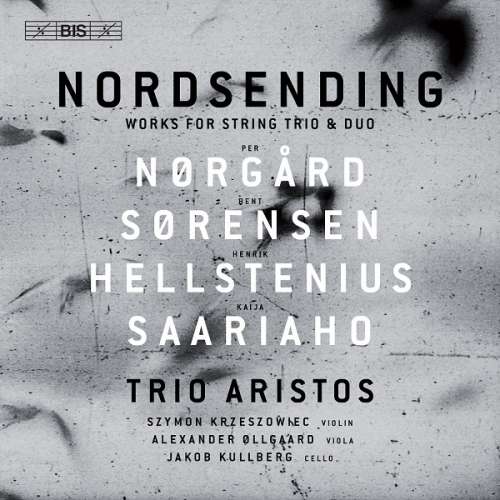